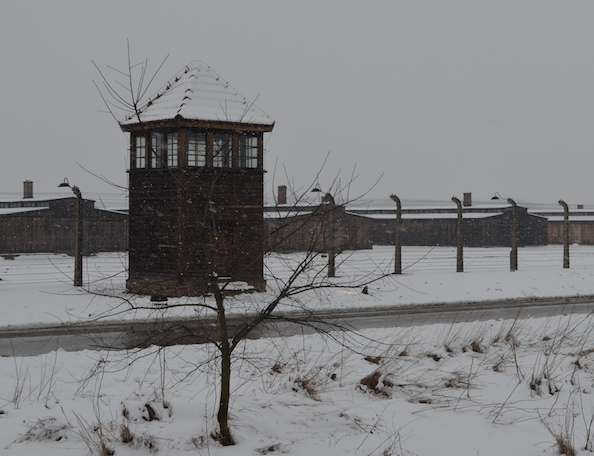 A view of Birkenau, the site of the memorial ceremony. (Toby Axelrod/JTA)
Advertisement

BERLIN (JTA) — A former Waffen-SS member is going on trial, charged as an accomplice in the murder of 300,000 victims at the Auschwitz-Birkenau death camp.

Oskar Groening, 93, will be tried at the District Court of Luneburg, near his hometown in Germany. The trial will begin on Tuesday.

Groening has admitted to being a guard at Auschwitz and, unlike most others brought to trial in recent years, has publicly expressed shame for having been “a cog in the killing machine that eliminated millions of innocent people.” He gave a long interview about his experiences to Der Spiegel magazine in 2005.

Plaintiffs in the case against him include the state as well as more than 60 Holocaust survivors and their relatives. Attorney Thomas Walter, who represents some 30 of the co-plaintiffs, said his clients are seeking belated justice and simply want to know the truth from Groening.

Among Groening’s alleged duties was removing luggage from the death camp train platform, so that new arrivals would not see evidence of murder of those who had preceded them. He also had to count the money removed from the luggage and send it on to the SS in Berlin, according to dpa, the German news agency. Groening reportedly was aware that those prisoners deemed unfit for labor would be murdered in gas chambers almost immediately after their arrival.

The charges relate specifically to the murder of at least 300,000 Hungarian Jews in the summer of 1944. There is no statute of limitations on murder in Germany, and if found guilty Groening could get a life sentence, which in Germany translates to 14 years. But the state prosecutors would have to determine whether he was fit to serve even a part of such a sentence.

Groening is one of several former concentration camp guards charged with crimes against humanity in the past year.