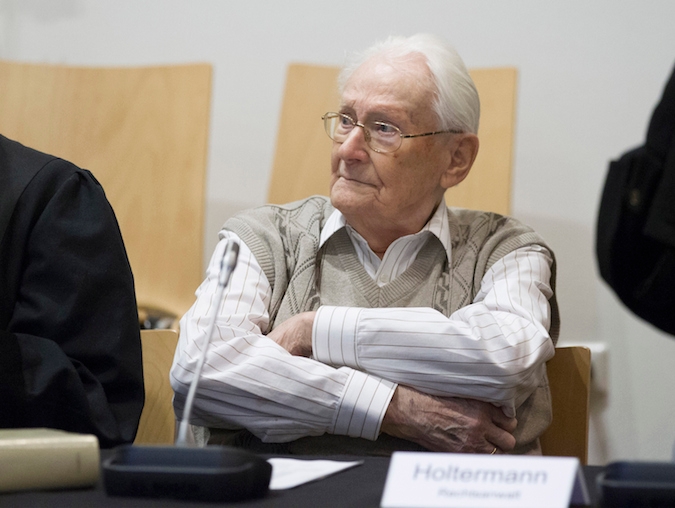 Oskar Groening, 93, arrives for the first day of his trial to face charges of being accomplice to the murder of 300,000 people at Auschwitz, April 21, 2015 in Lueneburg, Germany. (Andreas Tamme/Getty Images)
Advertisement

BERLIN (JTA) — Former Auschwitz guard Oskar Groening, on trial for his role in the murder of 300,000 people in the concentration camp, asked for forgiveness.

Groening, 93, told the District Court of Luneburg on Tuesday, the first day of the trial, that “for me there is no question that I made myself morally complicit.”

The former Waffen-SS member told the court that he learned about the gas chambers as soon as he reported for duty at Auschwitz in 1942, the German news agency dpa reported. He admitted to gathering the money and valuables found in the baggage of murdered Jews and handing it over to the SS — something he has publicly discussed in interviews over the years.

“I beg for forgiveness,” he said in court, according to news reports. “When it comes to the question of criminal guilt, you must decide.”

Groening was held in a British prison until 1948. He eventually found work as a payroll clerk in a factory.

The charges relate specifically to the murder of at least 300,000 Hungarian Jews in the summer of 1944. Plaintiffs in the case against him include the state as well as more than 60 Holocaust survivors and their relatives.

Groening is one of several former concentration camp guards summoned to stand trial in the past year.