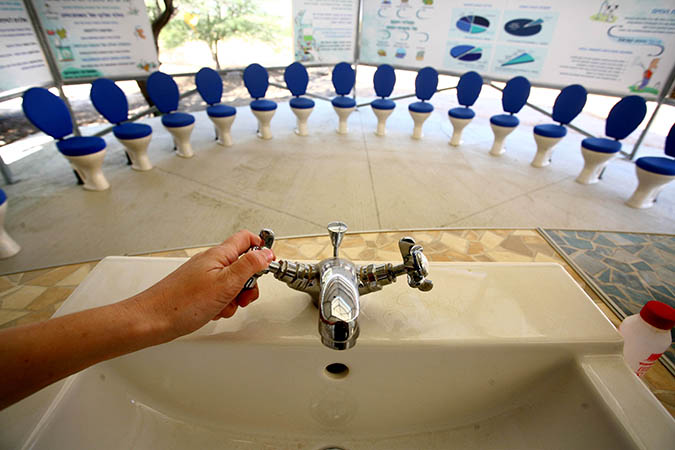 A faucet and toilets are seen in a classroom in the ecological village in Nitzana, Israel. Students there learn about desalination and on how to save water. (Chen Leopold / Flash 90)
Advertisement

TEL AVIV (JTA) — For help facing its worst drought in centuries, California should look to a country that beat its own chronic water shortage: Israel.

Until a few years ago, Israel’s wells seemed like they were always running dry. TV commercials urged Israelis to conserve water. Newspapers tracked the rise and fall of Lake Kinneret, Israel’s biggest freshwater source. Religious Israelis gathered to pray for rainfall at the Western Wall during prolonged dry spells.

However, the once perpetual Israeli water shortage appears to be mostly over. California’s water supply, meanwhile, is at record lows, prompting restrictions on household use and leading farmers to deplete the state’s groundwater reserves. From water recycling to taking the salt out of the plentiful seawater, here are five ways that Californians can benefit from Israel’s know-how.

Israeli farms don’t just use less water than their American counterparts, much of their water is reused. Three-quarters of the water that runs through sinks, showers, washing machines and even toilets in Israeli cities is recycled, treated and sent to crops across the country through specially marked purple tubes. According to the Pacific Institute, which conducts environmental research, California recycles only 13 percent of its municipal wastewater.

“If you take water from the city you don’t pay a tax, but if you have a well and you take that water you pay a lot of money for every cubic meter,” said Giora Shaham, a former long-term planner at Israel’s Water Authority. “If you’re a farmer in Rehovot and you have water that doesn’t cost money, you’ll take that water.”

2. Israel gets much of its water from the Mediterranean Sea.

Israelis now have a much bigger water source than Lake Kinneret: the Mediterranean Sea. Four plants on Israel’s coast draw water from the sea, take out the salt, purify the water and send it to the country’s pipes — a process called desalination.

The biggest of the four plants, opened in 2013, can provide nearly 7 million gallons of potable water to Israelis every hour. When a fifth opens as soon as this year near the Israeli port city of Ashdod, 75 percent of Israel’s municipal and industrial water will be desalinated, making Israelis far less reliant on the country’s fickle rainfall.

Desalination costs money, uses energy and concerns environmental activists who want to protect California’s coast and the Pacific Ocean. One cubic meter of desalinated water takes just under 4 kilowatt-hours to produce. That’s the equivalent of burning 40 100-watt light bulbs for one hour to produce the equivalent of five bathtubs full of water.

But despite the costs, San Diego County is investing in desalination. IDE Technologies, which operates three of Israel’s four plants, is building another near San Diego, slated to open as soon as November. Once operational, it will provide the San Diego Water Authority, which serves the San Diego area, with 50 million gallons of water per day.

“It’s a carbon footprint, but the technology is advanced enough that the cost of the process is lower than it used to be,” said Fredi Lokiec, IDE’s former executive vice president of special projects. “The environmental damage done because of a lack of ability to provide water to residents and agriculture because of the drought, because of overdrawing of groundwater, also has a price.”

3. Israelis irrigate through pinpricks in hoses, not by flooding.

No innovation has been more important for Israel’s desert farms than drip irrigation. Most of the world’s farmers water their crops by flooding their fields with sprinklers or hoses, often wasting water as they go. With drip irrigation, a process pioneered in Israel 50 years ago, water seeps directly into the ground through tiny pinpricks in hoses, avoiding water loss through evaporation.

Four-fifths of all water used in California goes to agriculture, and California’s farmers have been draining the state’s groundwater as rain has stopped falling. But as of 2010, less than 40 percent of California’s farms used drip irrigation, according to the Sacramento Bee.

Netafim, a leading Israeli drip-irrigation company, says the practice cuts water use by up to half. A Netafim representative told JTA that 80 percent of Israeli farms use drip irrigation.

“It can’t be that there’s such a huge water shortage, and they’re talking about a shortage of drinking water, and on the other hand they pour huge amounts of water into the ocean that could be used for agriculture,” said Avraham Israeli, president of the Israel Water Association, which advises Israeli water companies on technology development.

4. Israel’s government owns all of the country’s water.

Israel treats water as a scarce national resource. The government controls the country’s entire water supply, charging citizens, factories and farmers for water use. Residents pay about one cent per gallon, while farmers pay about a quarter of that.

In California, though, many farms drill from private wells on their property, drawing groundwater as rain has thinned. Some have even begun selling water to the state. State regulations to limit groundwater use, signed last year, won’t be formulated until 2020.

“Technology is not good enough,” said Eilon Adar, director of Ben-Gurion University’s Zuckerberg Institute for Water Research. “You have to change some of the regulation. You have to impose more limitations on water. California’s local consumers have to give up some of their rights.”

Adar and Israeli, however, both noted that adopting Israeli-style regulations in California would be near impossible, as some of California’s water rights holdings are more than a century old.

But government ownership doesn’t solve problems for all of the region’s residents. The Israeli human rights NGO Btselem says the West Bank suffers from a water shortage due to unequal allocation of the state’s water. According to Btselem, Israelis receive more than twice the amount of water per capita as Palestinians in the West Bank.

When an ad appeared on Israeli TV in 2008 showing a woman whose body crumbled to dust because of that year’s water shortage, a parody Facebook group suggested skin lotion. But the ad was just the latest iteration of an Israeli ethos to save water wherever possible.

Kids are taught to turn off faucets and limit shower time. Israelis celebrate rain — at least at first — rather than lamenting it. Lake Kinneret’s daily surface level shows up alongside weather reports in the paper.

In 2008, at the height of a decade-long drought, Avraham Israeli, the Israel Water Association president, dried out his lawn and replaced it with a porch to save water.

Israelis’ close attention to rainfall and drought comes from an education and culture that teaches them the importance of every drop in an arid region. With no end in sight for California’s drought, Adar said Californians would do well to adopt a similar attitude.

“You take an 8-year-old boy, you pump into their head that they have to save water as a scarce national resource,” he said. “In 10 years’ time, they’re 18 years old and they get it. It’s in their blood.”