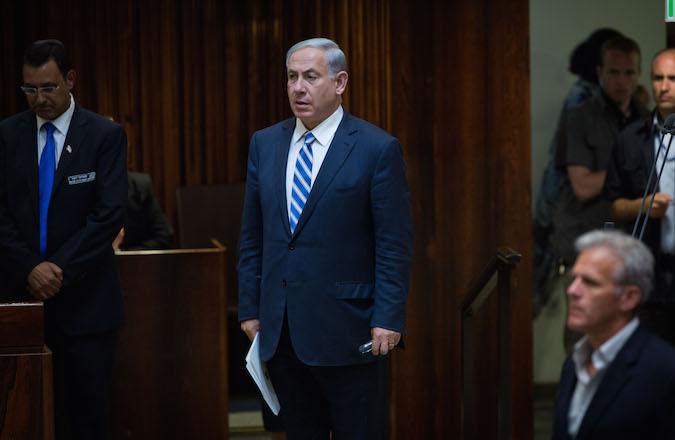 With 90 minutes to go until a Wednesday night deadline to form a governing coalition, Netanyahu concluded an agreement with the religious, pro-settler Jewish Home party that gives him the narrowest of parliamentary majorities – 61 of the Knesset’s 120 seats.

Along with three other right-wing and religious factions — United Torah Judaism, Kulanu and Shas — the five-party Likud-led coalition skews right on diplomacy and defense and, for the first time in at least a decade, includes no parties that support the establishment of a Palestinian state in the foreseeable future.

The agreement represents something of a setback for Netanyahu, who called for new elections last year in order to strengthen his grip on a legislature he considered to be ungovernable. In the last government, Netanyahu’s Likud headed a 68-seat majority coalition. In a statement late Wednesday announcing the agreement, Netanyahu sought to emphasize the positive.

“Sixty-one is a good number,” Netanyahu said Wednesday upon announcing the agreement. “Sixty-one-plus is a better number, but it begins with 61 and we will begin. There’s a lot of work ahead of us. I want us to go to work. It should be very successful for us and for the nation of Israel.”

The new coalition is largely in agreement on the question of Palestinian statehood. Having previously voiced support for a Palestinian state, Netanyahu said before the March election that the Palestinians would not get a state on his watch (and then walked back those comments).  Jewish Home is ideologically opposed to any withdrawal from the West Bank and strongly supports settlement growth. Kulanu would limit expansion to major settlement blocs but says statehood is not feasible under the current Palestinian leadership. The haredi Orthodox parties have been agnostic on Palestinian statehood in the past, though recent years have seen the haredi settler population swell.

“We are against giving one centimeter of land to the Arabs, both from moral grounds and security grounds,” Naftali Bennett, Jewish Home’s leader, said in a Feb. 24 speech. “The biggest mistake is to copy and paste what happened in Gaza in Judea and Samaria,” he added, using the biblical names for the West Bank.

Despite agreement on that point, the new coalition is split on other issues, including economic policy and religious affairs, which could pose a challenge as Netanyahu works to keep his 61 lawmakers in line.

“Anyone who’s worried about governance in Israel and political stability should be worried about a government of 61 seats,” Yohanan Plesner, president of the Israel Democracy Institute think tank, told JTA. “It’s a government that will find it hard to instigate much-needed economic reform and even to deal with more mundane affairs of state like passing a budget without being extorted by backbenchers in the coalition.”

But Hebrew University political science professor Gideon Rahat said the small coalition may make the government more stable, as partners will avoid conflicts that could break up the government.

Likud, with 30 seats, will control the foreign and defense ministries in the next government, along with the corresponding Knesset committees. Economic policy will be run by the 10-seat Kulanu, founded last year by ex-Likudnik Moshe Kahlon, who will serve as finance minister.

“The Israeli market needs reforms, and we in the Kulanu party, together with the Likud party, the prime minister, and the ministers, will lead it,” Kahlon wrote on Facebook last week after signing an agreement with Likud. “As we promised, in the next government we will advance reforms in housing, in banking, and we will work to narrow gaps in Israeli society.”

Jewish Home, with eight seats, received the education and justice portfolios, while the seven-seat Sephardi haredi Orthodox Shas party will run the Religious Affairs Ministry. The Ashkenazi haredi United Torah Judaism, with six seats, will not appoint any ministers out of an ideological opposition to Zionism, though it will have several deputy ministers.

Netanyahu had a hard time just getting to 61. According to Israeli reports of the secretive coalition talks, Likud’s prospective partners sparred with each other on policy and demanded top ministries.

The prime minister succeeded by granting significant concessions to his partners. UTJ demanded a rollback of religious reforms passed by the previous government, Shas received key ministries and Kulanu won the power to enact housing and land reforms.

The incoming justice minister will be Jewish Home’s Ayelet Shaked, 39, who entered Knesset just over two years ago. As minister, Shaked will aim to limit the Israeli Supreme Court’s power to overturn laws. Last year, the court invalidated a law allowing long-term detention of African migrants, one of Shaked’s key issues.

“There’s no situation in the world, as there is in Israel, where judges appoint themselves and invalidate laws,” Shaked wrote on Facebook two weeks ago.

Days before Wednesday’s deadline, coalition talks were rocked by the resignation of Foreign Minister Avigdor Liberman, who announced that his nationalist Yisrael Beiteinu party would sit in the opposition. Yisrael Beiteinu and Likud were allies as recently as last year, but Liberman said the incoming government would be insufficiently hawkish.

Netanyahu may keep the foreign minister title for himself, holding it open should he persuade the center-left Zionist Union, with 24 seats, to join the coalition. As of Wednesday, Zionist Union chairman Isaac Herzog said he would lead the Knesset opposition. On Facebook, he called the incoming government “a national failure government.”

“We won’t be a fifth wheel, and don’t intend to save Netanyahu from the holes he’s dug himself into,” Herzog said at a Zionist Union meeting Thursday. “I won’t be Netanyahu’s corkscrew. And if he thinks he can dangle this or that [ministerial] portfolio, he’s making a big mistake.”