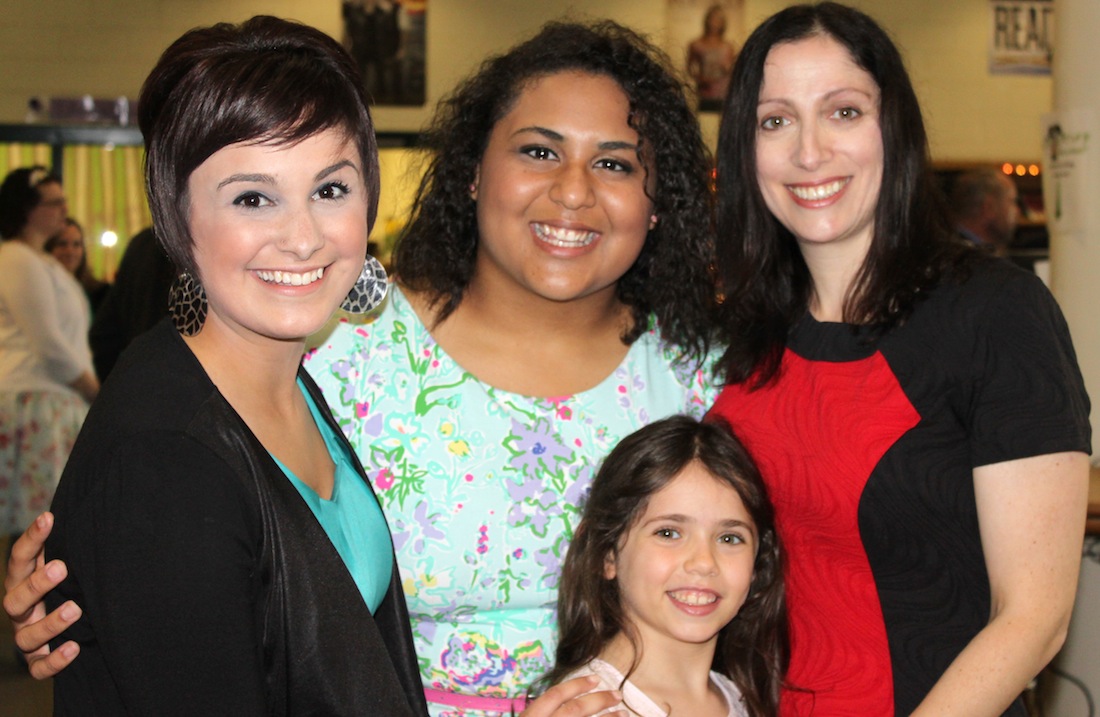 The letter’s writer, a German woman seeking help in escaping the Nazis from an American man she believed was a relative, was Shira’s distant cousin. The 8-year-old Florida girl was entrusting this tragic piece of family history to Lourie, an educator at Israel’s national Holocaust museum, Yad Vashem.

The act on Wednesday morning climaxed a more than yearlong search for information about the letter conducted by approximately 60 students — none Jewish — in the history classes taught by Todd Singer, a Jewish man new to the profession.

“I beg you not to put this letter aside without having read it,” Betty Erb, a resident of Berlin, wrote on April 17, 1939, to John G. Erb of 2030 Conlyn Street in Philadelphia. 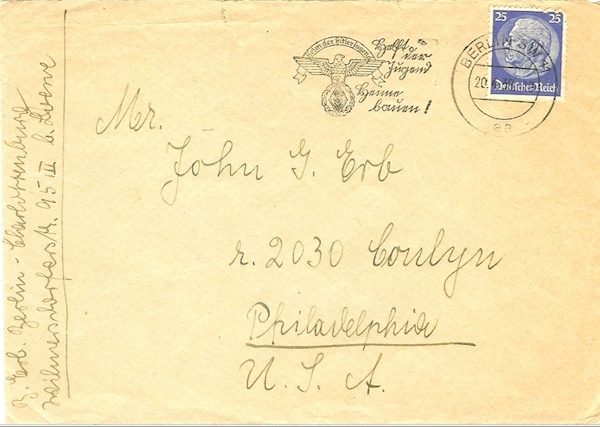 In the letter, sent in an envelope whose stamp features a Hitler Youth postmark, Betty expressed uncertainty over whether she was even related to John Erb. She explained that she was “in the greatest misery” and asked John to contribute toward the approximately $270 she and her fiancee required to immigrate to Bolivia.

To establish her bona fides as John’s possible relative, Betty stated the names of several ancestors and noted that their roots were in the Polish town of Znin.

She continued: “In the case that there is no relationship between us, I however implore you to help me in some way, even though you may perhaps have another religion. I assure you that by your help you would support people whose only hope is to find kind hearts to assist them to build up their existence in a foreign country. I trust that in later times we shall be able to thank you in another way for any kindness you will show to us.”

Singer purchased the letter and an unrelated document from the period online for $20 in 1999. Then working as a lawyer in his native Tulsa, Oklahoma, Singer placed it in a folder and forgot about it until last year, when he began planning lessons for his classes at East Henderson. 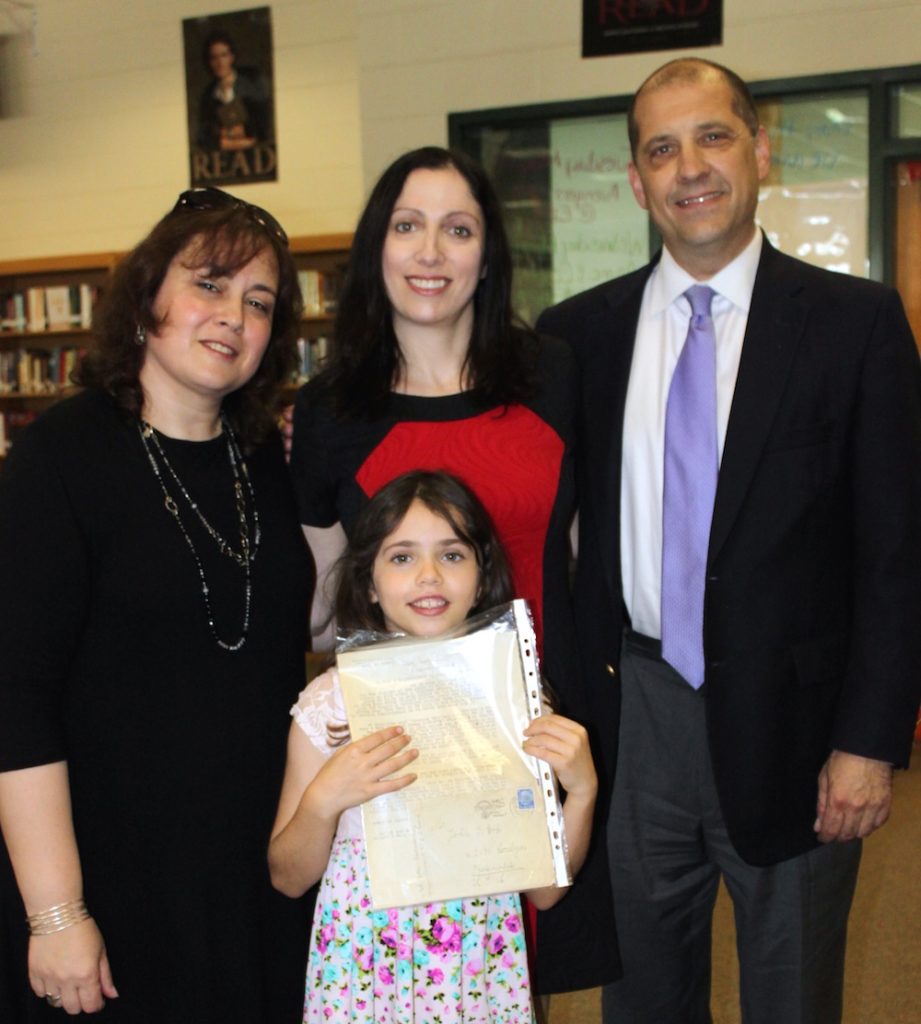 Singer engaged his students in a quest to determine Betty Erb’s fate. The students searched online and checked databases. Through Yad Vashem’s website, they learned that Erb and her husband, Martin Selling, were murdered in Auschwitz. The students, Singer said, “were devastated” at the news.

Next they searched for a living relative of Erb to whom to give the letter. Singer’s neighbor Benjamin Warren, a Houston philanthropist whose parents survived the Holocaust and who lives part of the year in North Carolina, learned of the search and encouraged another friend, a top official at Yad Vashem, to look into the matter.

Through records maintained by the International Tracing Service, Yad Vashem researchers found a British man related to Erb, Laurence Asslinger-Hoschschild, who referred them to his cousin Andrew Blitz in Perth, Australia.

Blitz’s sister, Suzanne Goldberg, who attended last week’s ceremony with her daughter, said the family didn’t know that Erb existed. But the names Erb noted in her letter matched some of those whom Blitz had researched years earlier. Erb is Suzanne Goldberg’s second cousin, three times removed.

“The outcome was more than we could have imagined — that one day I could meet these people,” said Maria Morava, an East Henderson senior. “The letter could not have found its way into better hands. I didn’t realize how emotionally taxing it would be.”

U.S. Rep. Mark Meadows, a Republican who represents the North Carolina congressional district where East Henderson High is located and attended the ceremony with his wife, said the giving of the letter to Yad Vashem was the kind of event that leaves a lasting impression.

“There are only a handful of events that touch you and will affect you forever,” Meadows told JTA. “This was one of those events.”

Lourie said that the letter’s power lies in its illuminating the lengths to which Betty Erb went to save herself and her future husband. As an educator in Yad Vashem’s pedagogical institute, Lourie plans to use the Erb letter as a teaching tool.

“Jews were not just victims,” Lourie said. “They were making choices, trying to get out. … They struggled for life. You read this letter, and here’s this woman reaching out to anybody who may be able to help her.”

She added, “It’s only when we zoom in to the story of the individual that we can understand the meaning of the six million.”

A good deal still remains unknown. Students are working to procure a photograph of Betty Erb and to learn whether John Erb ultimately sent funds to the Paris address of the Jewish resettlement agency HICEM. They also hope to uncover the path of the letter before it was purchased by Singer. And they would like to learn about Betty Erb’s life.

At last week’s ceremony, Lourie asked Morava and another senior who led the research effort, Breeana Clayton, to complete Yad Vashem Page of Testimony forms normally filled out by relatives to establish the identities of individuals killed in the Holocaust.

The name Betty Erb is bound to live on in future classes at East Henderson High, Singer said — an ironic legacy since the property where the school is now located was once used as a prisoner of war camp for German soldiers captured by American forces in Tunisia. The first German prisoners arrived in 1943, the same year that Betty Erb and Selling were deported to Theresienstadt. The couple died at Auschwitz the following year.