Israel and Palestine in an African-American play 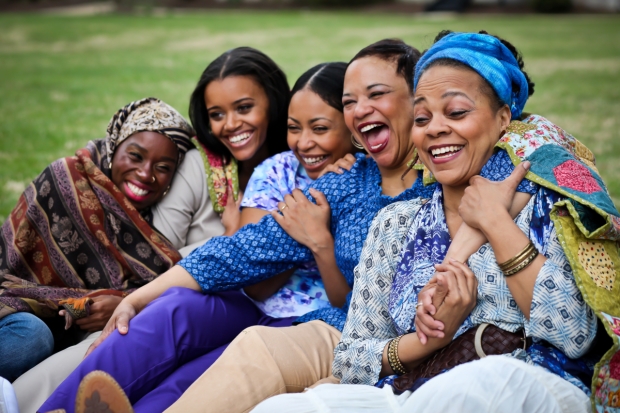 The cast of "The Blood Quilt," a show about feuding sisters. (Theatermania)
Advertisement

My family and I went to see “The Blood Quilt” at Washington’s Arena Stage on Mother’s Day.

It’s a terrific play, a world premiere by Katori Hall, and a good one for the day, exploring the complicated relationship between a recently deceased mother and her four daughters from different fathers, and between these four sisters and their daughter/niece.

A fraught weekend plays out against the traditions of the Gullah, off the Georgia coast, specifically, the communal creations of quilts.

There was also a revealing Israel-Palestine moment. More on that in a second.

Arena prides itself on being very much a D.C. playhouse, and its selection represents the diverse people who make up the city and its metro area. Earlier this year, it staged a revival of “Fiddler on the Roof.”

And folks from all these D.C. communities are subscribers, as we are. I’ve found it to be, in a metropolitan area that is not quite segregated but where blacks and whites still lead separate cultural lives, one of the few places where there’s an easy cultural mix.

So the audience, at least on Mother’s Day, was predominantly black, and there were interactions with the play you don’t experience in theaters with predominantly white audiences — knowing murmurs and occasional shouts of agreement with the sentiments of a character on the stage.

Mild spoiler alert: The four daughters discover that only one has inherited the quilts, and one has been written out of the will completely. Naturally, these two sisters are the ones with the most hostile relationship.

Here’s a reconstruction of the dialogue, and how the audience reacted, from memory:

Clementine, the oldest peace-making sister is chiding Gio, the disinherited sister, about how she deals with Amber, the sister the mother favored, saying Gio reflexively opposes whatever Amber proposes.

GIO: Why can’t I be Israel? (A wave of louder, longer laughter.)

AMBER: You can be Israel if you want.

GIO: No, you be Israel, you always taking my stuff. (Uproarious laughter, applause.)

Now, what struck me is how immediate the laughter was; how this audience instantly got what the playwright and the actresses were conveying.

This is not a reliable, statistical survey, it’s a cultural moment, but I think a revealing one of how Israel is playing in a critical American constituency.

The okay-to-good news for Israel: It’s better to be Israel. No one wants to be Palestine. Israel is the success, and success always looks more appealing.