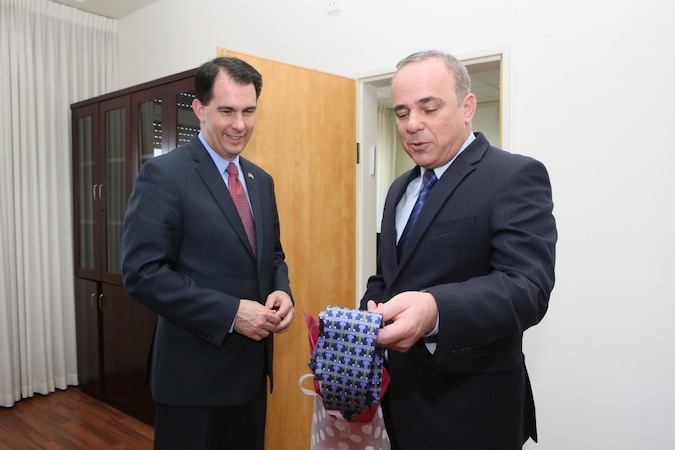 Now, Google “Scott Walker” and “London,” and it doesn’t look too great.

So when Walker went to Israel, he made sure there were no reporters.

Instead, his host, the Republican Jewish Coalition, is providing a filtered social media account of his trip.

Here’s the thing, though: That tree falls in a forest and no one is there to hear it thing? It turns out it does make a noise.

In other words, even without reporters around, Walker managed to convey a lack of interest in foreign policy, thanks to the report from his meeting with Yuval Steinitz, Israel’s minister of intelligence.

Now, Steinitz is perhaps Israel’s best explainer of his country’s opposition to the emerging Iran deal. I don’t want to get him in trouble with his boss, Benjamin Netanyahu, who considers himself quite the explainer, but this interview with Steinitz just about turned around David Ignatius, the Washington Post columnist who backs the deal.

But when Steinitz wanted to talk to the Wisconsin governor and putative presidential candidate about the Iran deal, Walker instead wanted to talk about state budgets.

The Intelligence Minister, Dr. Yuval Steinitz, yesterday afternoon hosted Scott Walker, the governor of Wisconsin. The governor came to Steinitz’s office principally for an update on the Iranian nuclear matter and for a review of Israel’s objections to the emerging deal.

The two discussed economic matters, and the governor expressed enthusiastic support for the two-year budget when [Steinitz] was minister of finance. Walker said he, too, runs a two-year budget in the state of Wisconsin. Both men agreed that this (two-year budgets) improves government operations and allows for long-term planning.

The release had attached to it a photo of Steinitz receiving what it described as Walker’s “modest gift of a tie.”