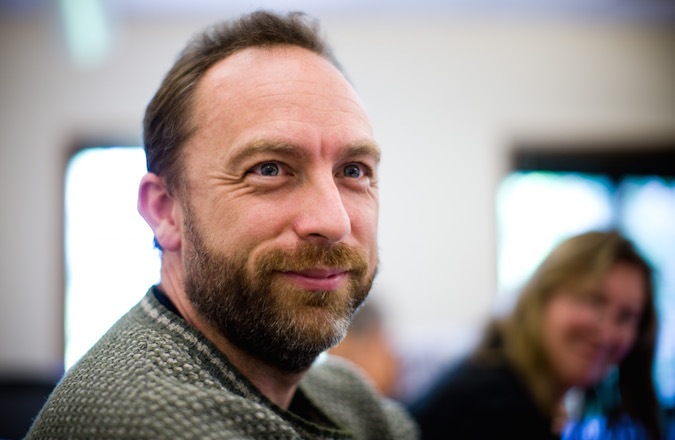 TEL AVIV (JTA) — In 2003, two years after the website was founded, the editors of Wikipedia faced a dilemma: How should they refer to the part-fence, part-wall Israel was building along the West Bank border?

The article’s first iteration — published amid the bloody second intifada, or Palestinian uprising — called it a “security fence” and focused on Israeli support. Within a half-hour, another editor added a sentence about a United Nations condemnation. Later that day, the phrase “apartheid wall” appeared, using the Palestinians’ preferred term.

Following thousands of edits on the free online, crowdsourced encyclopedia, the article now calls it the “Israeli West Bank barrier” and links to a list of alternative names, from “separation fence” to “wall of apartheid.”

“The right thing to do, if you’re new to the issue, is you should be told what is this debate about,” Jimmy Wales, the founder of Wikipedia, told JTA on Sunday during an interview here. “That’s a struggle. You have to be taught about those issues. You don’t want to, in an unclear way, use language that carries with it a hidden conclusion.”

Wales was in Israel — he’s been here more than 10 times, he says — to accept the Dan David Prize, an international award of $1 million given yearly at Tel Aviv University. Wales was chosen for spearheading what the prize committee called the “information revolution.”

“We could come together and give the great gift to the world of a free encyclopedia for every single person on the planet,” Wales said during his acceptance speech, describing Wikipedia’s mission. “Wikipedia is not just this one website but a movement to share knowledge globally.”

Wales prizes neutrality on Wikipedia, which is translated into 288 languages, including Hebrew, Yiddish and Ladino. Few topics present as great a challenge to that value as the Israeli-Palestinian conflict, where every word or snippet of information can be imbued with ideology. His response is to provide as many facts as possible, aiming to overwhelm any chance of bias.

“You can imagine some historical incident where [the late Israeli Prime Minister] Ariel Sharon said this, [the late Palestinian Authority President Yasser] Arafat said that,” Wales told JTA. “You present what all sides have said and leave it to the reader to come to the answer.”

Not all Israel advocates agree. In 2010, the right-wing Israeli organization My Israel recruited activists to edit Israel-related Wikipedia articles and give them a Zionist slant. Wales said nothing came of the effort, though now only registered Wikipedia editors may edit the “Israel” entry.

Rather than risking bias, each Wikipedia article’s multiplicity of voices makes it more valuable, says Hagit Meishar-Tal, a professor at the Holon Institute of Technology who studies Wikipedia’s influence in the classroom. Readers who peruse histories and discussions among Wikipedia editors, she said, can gain a deeper understanding of an issue.

“This discussion can create relevant information on where there’s disagreement, on what the arguments are between Wikipedians,” Meishar-Tal said. “The mechanism tries to create consensus, and that’s a beautiful thing.”

While Wikipedia strives for objectivity on Israel, Wales is unabashedly pro. The annual Wikimania conference, hosted by the nonprofit that runs Wikipedia, was held in the northern Israeli city of Haifa in 2011, and Wales appeared at the Israeli Presidential Conference that year.

Ahead of the Haifa conference, Wales defended Israel in a Facebook exchange with a pro-Palestinian activist, Joey Ayoub, that Ayoub subsequently published. Responding to Ayoub’s accusations of Israeli apartheid, Wales wrote, “How about those rockets? Complaining any about those?” Presumably he was referring to Hamas shooting rockets into Israel from Gaza.

“I’m a strong supporter of Israel, so I don’t listen to those critics,” Wales told JTA.

Wales said he backs Israel for “all of the standard reasons — the support for freedom of speech is very important to me, the rights of women, proper democracy. You can support all those things while still having criticism of actions and policies that aren’t good.”

After this trip Wales, whose work has largely been not-for-profit, will return $900,000 richer (10 percent of the prize goes to doctoral students).

Along with Wales, this year’s Dan David Prize was awarded to historians Alessandro Portelli and Peter Brown, and bioinformaticians Cyrus Chothia, David Haussler and Michael Waterman. In the past, figures such as former Vice President Al Gore and filmmakers Joel and Ethan Cohen have won the award.