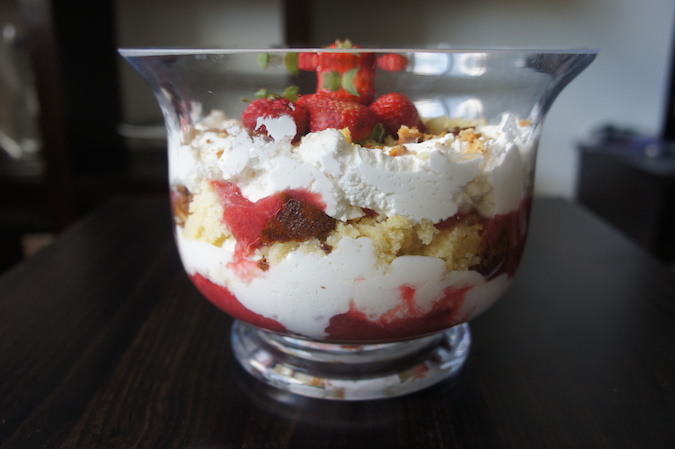 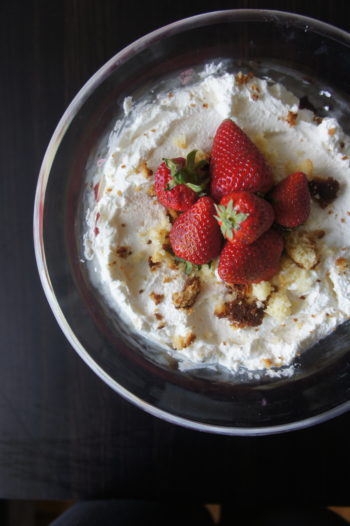 NEW YORK (JTA) — Forget fancy pastries, cakes or tarts: Trifles are the best dessert you can make for entertaining. They are delicious and look beautiful and impressive, but are actually one of the easiest desserts you can make.

The first time I made a trifle was actually after a baking mistake. My Bundt cake had fallen apart mere hours before Shabbat dinner, and I was in a pinch to throw together a dessert. I threw the botched cake into a trifle dish, added some fresh fruit and chocolate mousse and voila – I was able to salvage dessert.

Shavuot is traditionally a time when we serve cheesecake, blintzes and other delicious, but heavy, dairy dishes. This trifle sings of spring flavors while being much lighter than your average cheesecake. And there’s no baking required — and only minimal cooking — since I suggest using a store-bought pound cake. Which leaves you more time for your all-night Shavuot studying. Or sitting outside with a glass of iced tea and a bowl full of trifle.

Preparation:
To make the strawberry rhubarb compote, combine the chopped rhubarb, hulled strawberries, sugar, water and lemon juice in a saucepan. Bring to a boil over medium-high heat and then reduce to simmer for 10-15 minutes, until pieces of rhubarb have broken down and the mixture is soft.

Place rhubarb mixture into a food processor fitted with blade attachment. Pulse a few times to smooth out mixture or until it has reached your desired consistency.

To make the whipped cream, place the heavy cream in a large chilled bowl and mix on low speed using a hand mixer or stand mixer for 2 minutes. Increase speed to high and add vanilla. Add 2 tablespoons sugar and mix until you have stiff peaks.

To assemble, crumble the pound cake on the bottom of a trifle dish or large glass bowl. Add 1/2 to 1 cup rhubarb compote on top. Cover with whipped cream. Repeat layers until you have reached the top.

Add fresh strawberries and mint on top if desired.