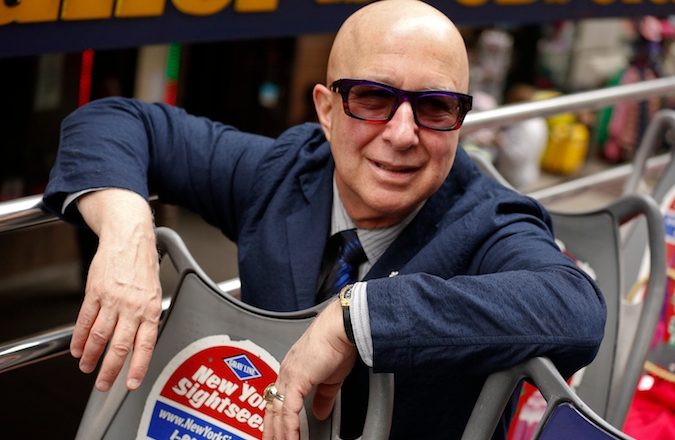 Paul Shaffer on May 5, 2015 in New York City. (Photo by Brian Ach/Getty Images for Ride of Fame)
Advertisement

Shaffer, 65, is a Canadian Jew who grew up going to an Orthodox congregation. Reportedly he is a member of the Mount Kisco Hebrew Congregation in suburban New York’s Westchester County.

He has worked with a wide range of famous artists (did you know he co-wrote the song “It’s Raining Men”?) and played live with dozens of all-time greats on Letterman’s shows. After Letterman’s “Late Night” run on NBC, Shaffer went with him to CBS, and the two have developed a legendary friendship.

Here’s hoping Shaffer will also play along with Letterman’s final musical guest on Wednesday night — the one and only Jewish bard Bob Dylan.

Below are five of Shaffer’s greatest moments as Letterman’s trusted music man.

2. Playing with Bruce Springsteen on Letterman’s final show on NBC (1993)

3. Backing up and singing with Warren Zevon, who had recently been diagnosed with terminal cancer (2002)

4. Replicating a song by punk band the Orwells as soon as they finished playing it (2014)

5. As a “guest” last week, giving a great James Brown impersonation and being called a “musical genius” by Letterman (2015)