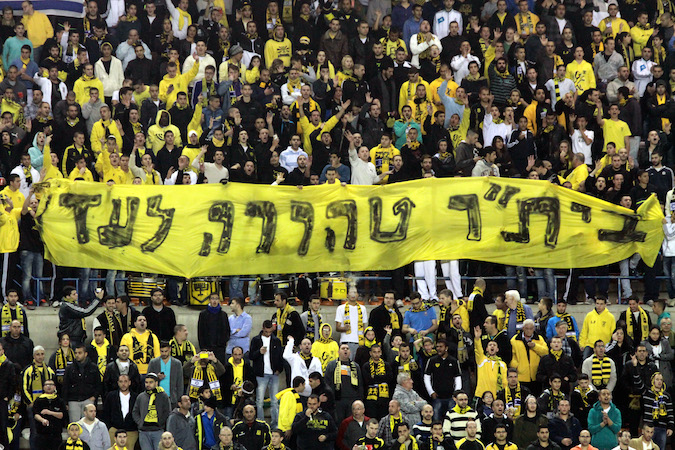 When delegates from FIFA’s 209 member states vote next week on a motion to suspend Israel from international soccer, they’ll base their decision on three Palestinian claims:

For the first two issues, delegates will have to consider issues of security, civil rights and sovereignty. But before voters consider the third, some of them should look in the mirror.

Because some Israeli fans are racist, and that must be forcefully condemned. But so are fans across Europe and throughout the world.

Israeli racism mostly rears its hideous head at Beitar Jerusalem matches, where supporters have chanted “Death to Arabs” and other racist slogans and songs as they watched their team play. In 2013, fans protested the signing of two Chechen Muslim players by displaying anti-Muslim banners and chanting anti-Muslim slogans.

One year earlier, following a Beitar match, fans marched into the nearby Jerusalem Mall and beat up Arab employees there. The team is the only one in Israel never to have fielded an Arab player, and visiting Arab players told ESPN in a 2012 report that they have felt harassed there. In April, according to Haaretz, Beitar coach Guy Levi said “I won’t find any player from the Arab sector who would want to. Even if there was a player who suited me professionally, I wouldn’t bring him, because it would create unnecessary tension.”

Unfortunately, Beitar is not alone. In Hong Kong in 2013, fans called players on a visiting Filipino team “slaves” and threw bottles at them. In Italy last year, fans of the Atalanta club threw bananas at black players on AC Milan — something that has happened at games in other countries as well.

Across Europe, according to a 2006 ESPN report, fans have chanted racist slurs against black players. In 2004, Spanish national team coach Luis Aragones was fined for muttering a curse — caught on tape — against a black player from an opposing team. This year, a Moscow team was penalized after fans displayed a Nazi flag.

Israel has also penalized Beitar for its fans’ chants. This week, Beitar was penalized one point in its league standings due to the chants. And Israel’s Equal Opportunity Employment Commission has called on the team to disavow the coach’s statement against Arab players.

If delegates choose next week to suspend Israel for its settlement teams or its restrictions on Palestinian players’ movement, they will deal a heavy blow to Israel’s international standing.

Racism in other countries’ soccer matches doesn’t mitigate its harm in Israel. Beitar Jerusalem fans’ racism is completely inexcusable. But if FIFA delegates vote against Israel because of Beitar’s racist fans, they’ll be singling Israel out for a reprehensible trend that must be vigorously and unequivocally opposed not only in Jerusalem, but all over the globe.