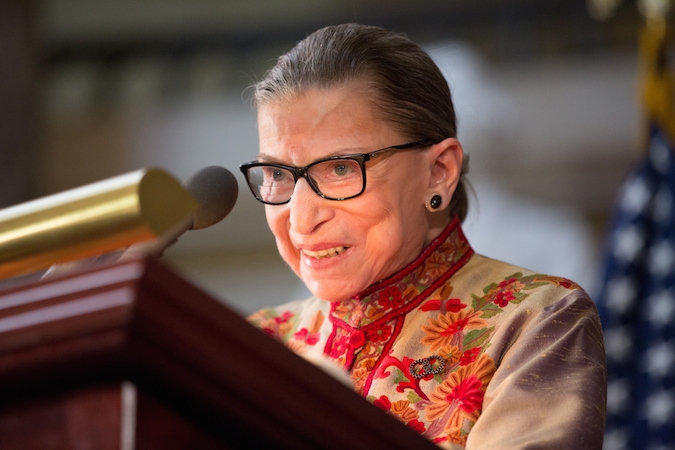 The Washington Post, Raw Story and other outlets are reporting on preacher Franklin Graham’s appeal to followers to pray that the eyes of Ruth Bader Ginsburg “be opened to the truth of Scripture” when she considers the gay marriage case currently under consideration by the Supreme Court.

In each of the reports, the notorious RBG’s Jewishness has been emphasized. The Washington Post follows up Graham’s appeal by noting that “Ginsburg, 82, is Jewish.”

I’m not sure it’s an issue. On Facebook, Graham is, day by day, rotating through each of the nine justices in appealing to his followers to pray for the “right” decision. In each case, he frames the appeal with details, including what the justice in question had to say during oral arguments, and what his or her known views are from similar cases or from actions they have taken.

So far, he has not made an issue of any of the justices’ faith. (He has covered Ginsburg and Elena Kagan, and has yet to get to the third Jewish justice, Stephen Breyer.)

What appears to gall the reporters is that Graham is presuming Christian beliefs to non-Christian justices. “Ginsburg is Jewish and not a likely follower of his version of scripture,” Raw Story says.

Today, let’s focus our prayers on Justice Ruth Bader Ginsburg, who has served on the Court for over two decades. Those who support same-sex marriage consider her an ally in their fight to toss God’s Holy Word aside. As the Supreme Court continues to deliberate over the constitutionality of same-sex marriage, let’s pray that Justice Ginsburg’s eyes would be opened to the truth of Scripture and that she would not be deceived by the arguments of those who seek to impose their “new morality” on our nation.

It’s not uncommon for believers to hold that God acts through non-believers, even in instances when the divine vehicle is likely to remain a non-believer before, during and after the divine act. (It’s certainly not uncommon in Judaism: Balaam and Ahasuerus come immediately to mind.)

Additionally the scripture Graham refers to is in the Jewish part of his Bible (don’t call it “Old,” Bub.)

And while Raw Story is likely correct in presuming that Ginsburg and Graham would have different spins on the passage from Leviticus, there are Jewish readings of the same passage that Graham would be happy for Ginsburg to embrace.