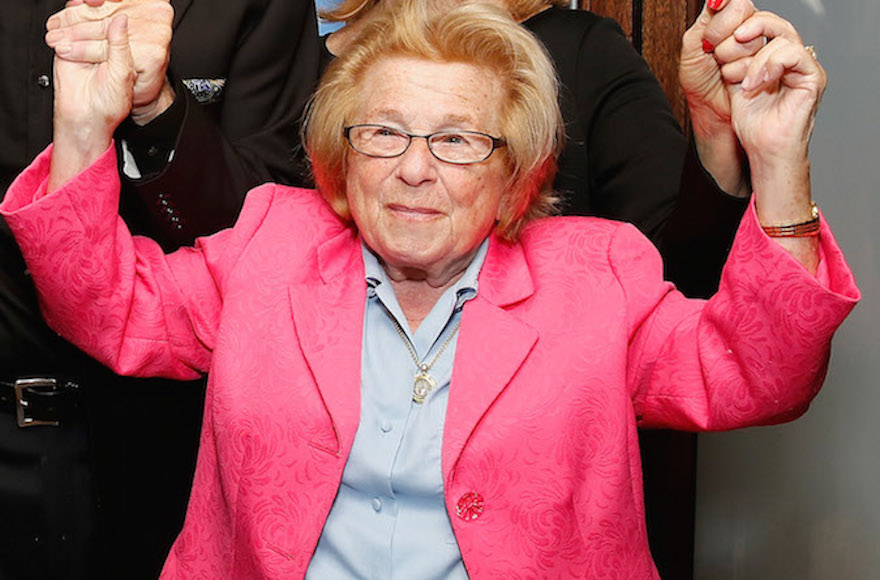 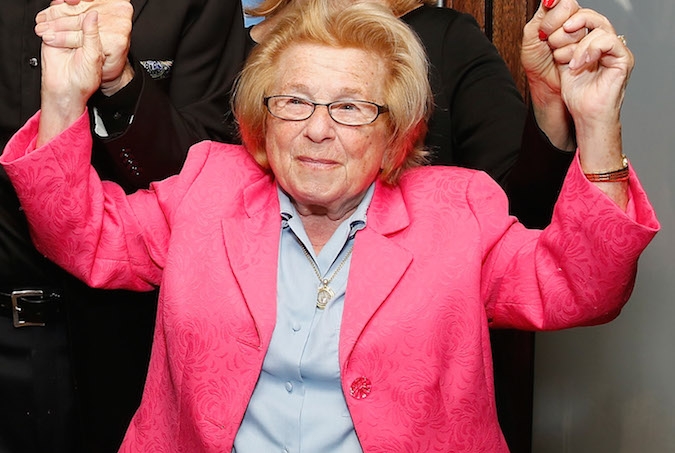 NEW YORK (JTA) — Dr. Ruth Westheimer, the octogenarian therapist and TV host, is famous for her frank and open talk about sex. But she’s being called out for her recent comments about sexual consent — and using the Talmud to back up her controversial point of view.

With her new book, “The Doctor is In: Dr. Ruth on Love, Life, and Joie de Vivre” (Amazon Publishing), out on Tuesday, the German-born Holocaust refugee, Israeli War of Independence veteran and one-time Planned Parenthood staffer who turns 87 this week is on the media circuit. And one of her talking points — which she made Monday on “The Diane Rehm Show,” a public radio program — is that consent becomes moot after the clothes are off.

Here’s how she put it:

“I am very worried about college campuses saying that a woman and a man — or two men or two women, but I talk right now about women and men — can be in bed together, Diane, and at one time, naked, and at one time he or she, most of the time they think she, can say ‘I changed my mind.’

“No such thing is possible,” Westheimer added. “In the Talmud, in the Jewish tradition, it says when that part of the male anatomy is aroused and there’s an erection, the brain flies out of that and we have to take that very seriously, so I don’t agree with that.”

JTA reached out to Westheimer to clarify her views on consent and find out exactly which passage in the Talmud she was referencing, but she was not available — perhaps not surprising given that Tuesday was the launch day of her book and Monday night she was at a fundraising dinner for the Museum of Jewish Heritage.

However, clearly aware that her comments are being construed as green-lighting rape, she tweeted on Tuesday, “I am 100% against rape. I do say to women if they don’t want to have sex with a man, they should not be naked in bed w/him.”

Moments later, she added, “That’s risky behavior like crossing street against the light. If a driver hits you, he’s legally in the wrong but you’re in the hospital.”

However, several rabbis are questioning her use of the Talmud.

Rabbi Danya Ruttenberg, author of several books on Judaism, including “The Passionate Torah: Sex and Judaism” (NYU Press), said the Talmud actually offers a strong argument that sex without explicit consent is a crime. The Talmud (in Ketubot 51B) goes so far as to assert, Ruttenberg said, that even if the woman has an orgasm or decides in the middle of the act that she does consent, if she has not consented at the outset, it is still considered wrong.

“I’m grateful that Dr. Ruth has in the past made a space to talk about human sexuality in a way that was really radical for its time,” Ruttenberg said. “But a) she’s wrong about this, and b) she should not be using our tradition to bolster her argument.”

Although she was uncertain what part of the Talmud Westheimer was referencing, Ruttenberg noted that the statement is quite similar to a Yiddish saying: “Ven der Putz shtayt, der saychel gayt,” literally (according to JTA’s unofficial Yiddish translator, author Shulem Deen), “When the penis ‘stands,’ the brains walk out.”

If the rabbis in fact said this — no doubt using less colorful phrasing — Ruttenberg theorizes, they probably intended it as descriptive rather than prescriptive.

“The rabbis had a lot to say about sexual arousal and the ways this can be a problem, and how to arrange your life so you are not aroused when it’s not appropriate,” she said, adding, “I’m very comfortable saying, knowing the rabbinic corpus as I do, that they were not saying, ‘Boys will be boys.’ I think they were saying this is a thing that happens and how do we deal with it.”

Rabbi Shmuley Boteach, whose books about sex and Judaism include “Kosher Sex,” “Kosher Adultery” and “Kosher Lust,” said, “I know Dr. Ruth and very much like her, but anyone in the Jewish community should strongly object to what she said. Consent is offered by a woman, and it can be withdrawn at any moment.

“The idea that men are ravaging beasts who are controlled by their hormones and can’t stop themselves is a Neanderthal view that Judaism would never embrace. It’s a shockingly frightening excuse for rape.”

Like Ruttenberg, Boteach was unfamiliar with the precise source of Westheimer’s Talmudic citation and questioned whether the interpretation was accurate. And like Ruttenberg, he pointed out counterexamples from the Talmud.

“The Talmud says [in Sanhedrin 37A] that if a woman begins menstruating in the middle of the act, the man has to prop himself up on his elbows and subside because it’s not sanctioned by Jewish law,” Boteach said, referring to the Jewish prohibition on sexual contact during menstruation known as niddah. “The Talmud is showing that a man can absolutely control himself.”

In addition, Boteach said, the Talmud strongly prohibits rape, even in marriage, ruling in Nedarim 20B that a man cannot sleep with his wife when either is drunk because full consent is not possible.

“A woman’s consent is dependent entirely on her,” he added. “If she says no, stop, that’s it. To say ‘I’m on autopilot’ is ridiculous.”

Rabbi Dov Linzer, head of Yeshivat Chovevei Torah, a liberal Orthodox rabbinical school, and co-host of “The Joy of Text” monthly podcast on Judaism and sexuality, agreed with Ruttenberg and Boteach. Linzer pointed to the passages they cited and also noted a passage in Berachot 62A saying that even when a man and his wife are naked together in bed, it is incumbent upon him to make sure she desires to have sex before beginning the act.

Although known for its conflicting opinions and arguments, the Talmud is notably consistent about sexual consent, Linzer said, adding that he could not think of any passage that forgives or condones sex without full consent and that “the whole issue of responsibility and culpability is a major theme in the Talmud.”

“This is about inflicting something unwanted on another person,” he said.

While it is “one thing”  when “circumstances might be considered so overwhelming so as to lower the culpability of certain acts or transgressions, it’s a different thing to say you can go ahead and do something to someone else, that you don’t have responsibility toward another person.”

NOTE: This article has been corrected, as the original version inaccurately paraphrased Rabbi Dov Linzer in the final paragraph.