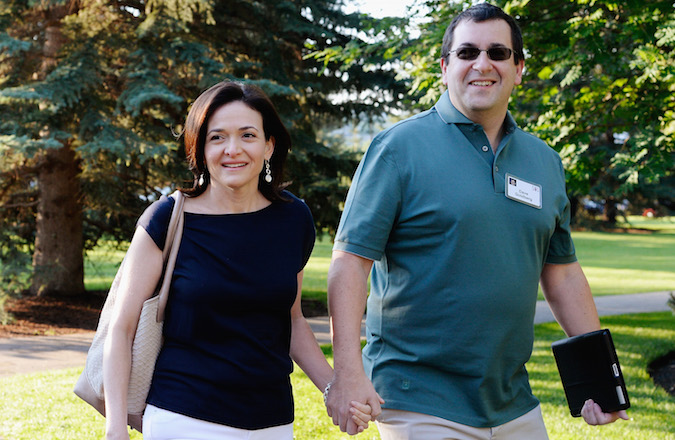 Facebook COO Sheryl Sandberg with her late husband Dave Goldberg at a media and technology conference in Sun Valley, Idaho in July 2013. Goldberg died suddenly on May 1, 2015 from head trauma sustained from falling off a treadmill. (Kevork Djansezian/Getty Images)
Advertisement

The death of Sheryl Sandberg’s husband, Dave Goldberg, last month reverberated far beyond the confines of Silicon Valley. Goldberg, the 47-year-old CEO of Survey Monkey, died after sustaining a head trauma when he fell off of a treadmill while on vacation in Mexico with his family.

As she did a few days after her husband’s death, Sandberg took to Facebook on Wednesday to mark the end of her sloshim period, or the 30-day mourning period after the burial of a closed relative. Her resulting 1,734 word essay is incredibly heartfelt, surprisingly honest and full of inspiring quotes.

On the night of her husband’s death: “I have learned some practical stuff that matters. Although we now know that Dave died immediately, I didn’t know that in the ambulance. The trip to the hospital was unbearably slow. I still hate every car that did not move to the side, every person who cared more about arriving at their destination a few minutes earlier than making room for us to pass. I have noticed this while driving in many countries and cities. Let’s all move out of the way. Someone’s parent or partner or child might depend on it.”

On returning to her job as Facebook COO: “For me, starting the transition back to work has been a savior, a chance to feel useful and connected… One of my favorite cartoons of all time has an elephant in a room answering the phone, saying, ‘It’s the elephant.’ Once I addressed the elephant, we were able to kick him out of the room.”

On how her experience has inspired others to lean in: “I am truly grateful to the many who have offered their sympathy. A colleague told me that his wife, whom I have never met, decided to show her support by going back to school to get her degree—something she had been putting off for years. Yes! When the circumstances allow, I believe as much as ever in leaning in. And so many men—from those I know well to those I will likely never know—are honoring Dave’s life by spending more time with their families.”

Sandberg’s essay drew praise across the web on Wednesday.

I’m far from first to say it, but this Sheryl Sandberg post on the 30 days since Dave Goldberg died is extraordinary https://t.co/gwjZXKKIkb

Read this Sheryl Sandberg post. It touches us all–in the past, present or future: https://t.co/6NtUIwJuL0