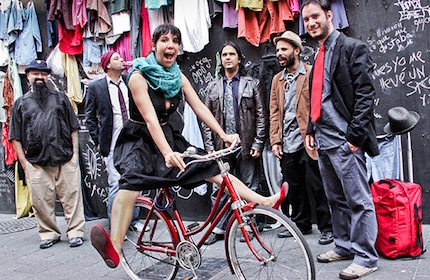 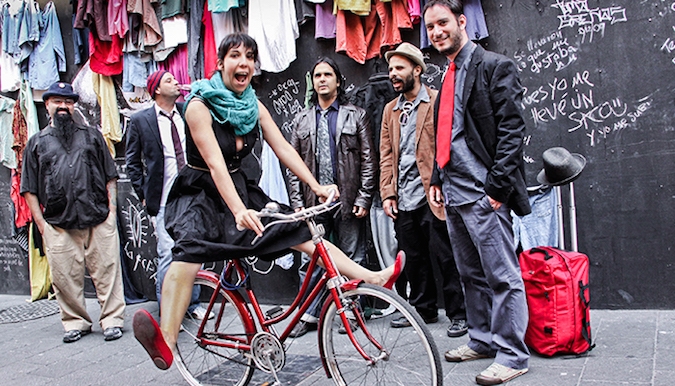 The Mexican Klezmer band Klezmerson will play Joe’s Pub as part of the first-ever Kulturfest on June 19th. (Courtesy of Kulturfest)

The National Yiddish Theater Folksbiene is 100 years young and they’re celebrating in style with Kulturfest, “the first-ever international Jewish performing arts festival” that’s taking place in Manhattan June 14 through 21. Expect a week filled with events celebrating Jewish and Yiddish theater, dance, music, film and more. The offerings are expansive —  and you can’t really go wrong — but we do have our favorites. Here are JTA’s top Kulturfest picks.

The fest kicks off with a concert, in Manhattan’s financial district, that features all-star lineup starring the Klezmatics band and the singer-songwriter Neil Sedaka. Expect loads of special guests, including rapper/musician/producer SoCalled and the Tony Award-nominated Broadway actress Judy Blazer. Best of all, it’s free and open to the public.

Klezmer music by way of Mexico, this ensemble is led by violinist, pianist and composer Benjamin Shwartz. Get ready to get down to the band’s high-energy blend  of Jewish folk, gypsy tunes and traditional Latin American music. Klezmerson’s show at Joe’s Pub is followed by a concert from Isle of Klezbos, an all-women klezmer sextet.

A production of Montreal’s Dora Wasserman Yiddish Theater, this modern retelling of the Yiddish theater classic takes on love, loss and possession and is set in “a community torn between religion, superstition and spiritualism.”  Performed at the Abrons Arts Center Playhouse in Yiddish with English supertitles.

Tired of taking in Jewish culture via your eyes and ears? It’s time to use your mouth and take to the streets! The Workmen’s Circle’s Taste of Jewish Culture Street Fair, held at Sixth Avenue and 46th Street, will feature tasty bites from the likes of Dassara Brooklyn Ramen, The Gefilteria (a gefilte fish purveyor), and deli food from Katz’s, Mile End and more. Work off the calories while dancing to live music from Frank London’s Klezmer Brass All Stars and other notable guests.

At the Abrons Arts Center Experimental Black Box, check out this interactive, family-friendly musical that’s billed as a “Jewish Alice in Wonderland” combining the past and the present, modern superheroes and legendary characters from the 19th-century Chelm shtetl. The performance, in English, is based upon writings of Soviet poet Ovsey Shike Driz and is a production of FolksbieneRU, a “unique cultural platform” that engages NYC’s Russian-speaking community.

Kulturfest is promoting its Festipass, which gets you into five performances or plays, one event at NYU’s Skirball Center and two film screenings for $125 ($60 for those 30 and under). More information about the range of offerings, pricing, and event locations can be found at kulturfestnyc.org.