Kevin Pillar, shown hitting against the Baltimore Orioles in a game on May 12, 2015, has shown his prowess at bat and in the field this season for the Toronto Blue Jays. (Hillel Kuttler)
Advertisement

One near the shoulder reads “8-14-13,” the date of Pillar’s major league debut. The bottom one shows a nautical compass in tribute to his grandfather, Ed Lambert, who often took his grandson on his boats and taught him how to sail.

Pillar, a Los Angeles native, cherishes the memories of those Southern California trips. They’d set out from Coronado, the San Diego-area port where Lambert kept his yacht and a sailboat. His grandfather, Pillar said, was “a smart man” – an accountant, teacher and real-estate professional near Palm Springs who attended his grandson’s games.

“The last thing he told me was he was proud of me. It meant the world to me to have him see me put a major league uniform on and play [on television],” Pillar told JTA in a recent interview at his locker prior to a game against the Orioles here. 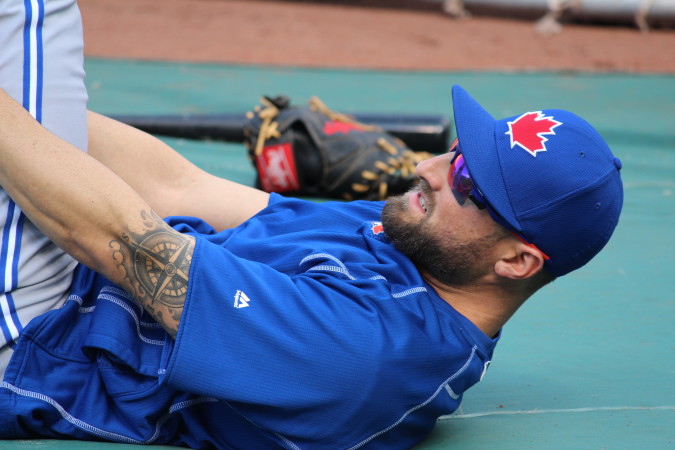 Pillar is now in his third season with the Blue Jays, who have enjoyed smooth sailing of late: Toronto had won 11 straight games in the past week and a half to vault into contention in the American League East before losing to the New York Mets on Monday night.

In his first season as a regular player, Pillar has contributed with his glove and his bat.

The 26-year-old is second on the hard-hitting club in games (he’s missed just one of the first 65), at bats and hits; is tied for the lead with nine stolen bases; and his .251 batting average has risen nearly 30 points in recent weeks. Earlier this month, at the start of the winning streak, Pillar homered twice and singled against Washington and its ace pitcher, 2013 Cy Young Award winner Max Scherzer.

His prowess at the plate isn’t surprising: Pillar set an NCAA Division II record with a 54-game hitting streak in 2010 with California State University, Dominguez Hills, and batted .367 over his four years there. In the minors he had a batting average of .323 after being drafted in the 32nd round.

But it has been on defense that he has surprised some, making several outstanding catches that have landed him on highlight shows.

Two plays in 2015 especially stand out.

There was the catch in Toronto against the Tampa Bay Rays in which Pillar stretched over the 10-foot-high wall — planting his right foot about halfway up to propel himself — to pull back a home run. Two weeks later, in Cleveland, he sprinted into right-center field and crashed into the fence to take away an Indians’ extra-base hit.

“Going through that stretch when I made some pretty fantastic catches, I think it’s not only opened the eyes of my teammates and coaching staff, but all of baseball – that I play the outfield well,” he told JTA.

His manager, John Gibbons, said the baseball world “has woken up to him.”

“He’s on those [ESPN] ‘Web Gems.’ It’s not happening by mistake,” said Gibbons, who had started Pillar in left field but now has him solely in center field. “He’s a heck of an outfielder.”

Pillar was at it again Sunday in Boston, dashing from deep center field to snag a fly ball about to drop in to right-center.

Even his opponents are noticing: Orioles’ All-Star centerfielder Adam Jones said of Pillar, “I love how he approaches the game.”

Pillar is taking nothing for granted, saying that playing in the majors “is a dream come true. It’s what I’ve worked for my whole life.”

“I took the mindset that every day I’d prove that I’m worthy of playing every day and help the team win games,” he said.

His mother, Wendy, said her son “can never get enough” of baseball. Even his offseason includes rigorous training.

After starring in basketball and as a two-way player in football, Pillar devoted himself to baseball late in high school, she said.

It was his mom’s family that provided Pillar’s Jewish influence: Wendy’s mother and maternal grandparents were observant and lived in the Los Angeles suburbs. The family didn’t affiliate with a synagogue, but Pillar and his elder brother, Michael, participated in bar mitzvah prep classes.

Now Pillar has his sights set on playing for Israel in next year’s World Baseball Classic; he said he wasn’t contacted in time for the 2012 tournament.

With his maternal grandmother, Leila, 80, in mind, Pillar said it “would be a great honor.”