Is Oren’s call for ‘no surprises’ in U.S.-Israel ties possible? 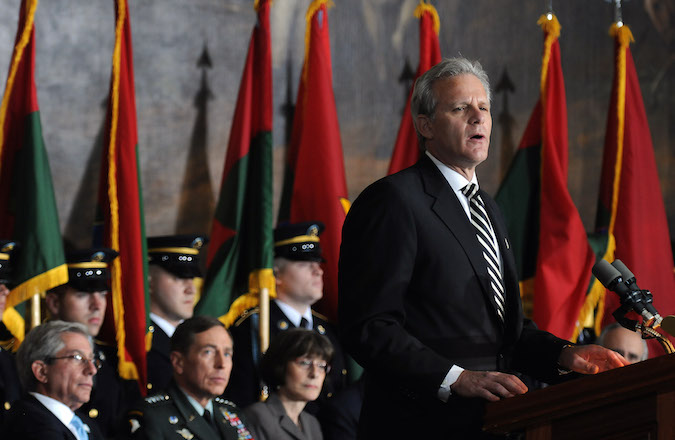 Michael Oren, shown speaking at the Holocaust Day of Remembrance ceremony at the U.S. Capitol in 2010, caused a stir with accusations against President Obama in an Op-Ed. (Astrid Riecken/Getty Images)

But should there be no public disagreements – “no daylight,” in diplomatic parlance – between the United States and Israel, and is that kind of shoulder-to-shoulder closeness even possible between allies?

Oren, the American-born diplomat who served as Israel’s ambassador in Washington from 2009 to 2013 and is now a Knesset member in Israel’s center-right Kulanu party, outlined his argument in an Op-Ed piece in The Wall Street Journal. The piece appeared the same week as the launch of Oren’s new book, “Ally: My Journey Across the American-Israeli Divide.”

“Immediately after his first inauguration, Mr. Obama put daylight between Israel and America,” Oren wrote in the Op-Ed.

“With the Middle East unraveling and dependable allies a rarity, the U.S. and Israel must restore the ‘no daylight’ and ‘no surprises’ principles,” Oren wrote. “Israel has no alternative to America as a source of security aid, diplomatic backing and overwhelming popular support. The U.S. has no substitute for the state that, though small, remains democratic, militarily and technologically robust, strategically located and unreservedly pro-American.”

David Makovsky, a member of the U.S. State Department team that last year attempted to broker Israeli-Palestinian peace, said open disagreements and mutual surprises have characterized the relationship for decades.

He mentioned events starting from President Dwight Eisenhower’s threats to isolate Israel during the Suez war in 1956 through President George W. Bush’s endorsement in 2002 of Palestinian statehood, which caught Israelis by surprise. Makovsky also noted Israeli decisions that caught Americans off guard, such as the bombing of the Iraqi nuclear reactor in 1981 and Israel’s entry into Beirut during the 1982 Lebanon War.

“Aspirationally, there should be no surprises,” said Makovsky, who is now a fellow at the Washington Institute for Near East policy, a think tank regarded to have close ties to the U.S. and Israeli governments. “In all candor, this is not always the case on either side.”

While it’s true that disagreements long have characterized U.S.-Israel ties, Obama was the first president to make a policy of “daylight,” said Jonathan Schanzer, a vice president at the Foundation for Defense of Democracies whose expertise includes the Israeli-Palestinian relationship.

“This is the first time that this has been a systematic approach to Israel,” Schanzer said, noting the report cited by Oren that Obama in July 2009 told Jewish leaders he believed the policy of no daylight was contrary to American and Israeli interests and to advancing the peace process.

“When tensions came up in the past, the approach was to try to downplay it,” said Schanzer, who monitored terrorist financing at the U.S. Treasury during the George W. Bush administration. “Over the last six years, when there has been a disagreement, this administration has doubled down on the conflict that existed and used those disagreements for political gain.”

Ilan Goldenberg, the chief of staff for the U.S. Middle East peace team until last year, said Obama and Israeli Prime Minister Benjamin Netanyahu have made their grievances public.

He noted Netanyahu’s strategy of public lobbying against the emerging nuclear deal between Iran and the major powers. Obama favors the deal, and his administration officials have urged Netanyahu to make his disagreements known in a private setting.

“Obama has been willing to express disagreement more than previous presidents,” said Goldenberg, the director of the Middle East program at the Center for a New American Security. “But the big violator of no daylight now is Netanyahu, much more than Obama, even as Obama tries to reach out.”

Goldenberg also took issue with some of Oren’s examples. Oren wrote that Obama abrogated the “no surprises” principle “in his first meeting with Mr. Netanyahu, in May 2009, by abruptly demanding a settlement freeze and Israeli acceptance of the two-state solution.”

Those positions should not have taken Netanyahu by surprise, Goldenberg said: Two states had been a principle since the Clinton presidency, and freezes on settlement growth were the policies of U.S. administrations since almost immediately after the 1967 Six-Day War, when Israel captured disputed territories.

“Saying ‘two states and 1967 lines with land swaps’ was unprecedented was dubious given 242 and the Clinton parameters,” Goldenberg said, referring to the 1967 U.N. Security Council resolution that called for Israel’s withdrawal from territories captured during the war.

Heather Hurlburt, a director at the liberal New America think tank, said she was taken aback by Oren’s insistence in the Op-Ed that Netanyahu’s offenses, including announcements of settlement building, were missteps, while Obama’s offenses were deliberate.

“Everything the Israeli side did that was damaging was accidental, but everything the Obama side did was a personal decision of Obama?” she asked incredulously.

The penning of such an Op-Ed by a recent ambassador suggests deeper problems in the U.S.-relationship, Hurlburt said.

“If that’s how he perceived it” when Oren was an ambassador, “it’s an enormous problem,” Hurlburt said. “This is recriminating over who hurt the other person more in the relationship. It’s embarrassing. When you get to that point in a relationship, you’re usually done.”