Beyond Iran and Gaza, Israel has socioeconomic worries, too 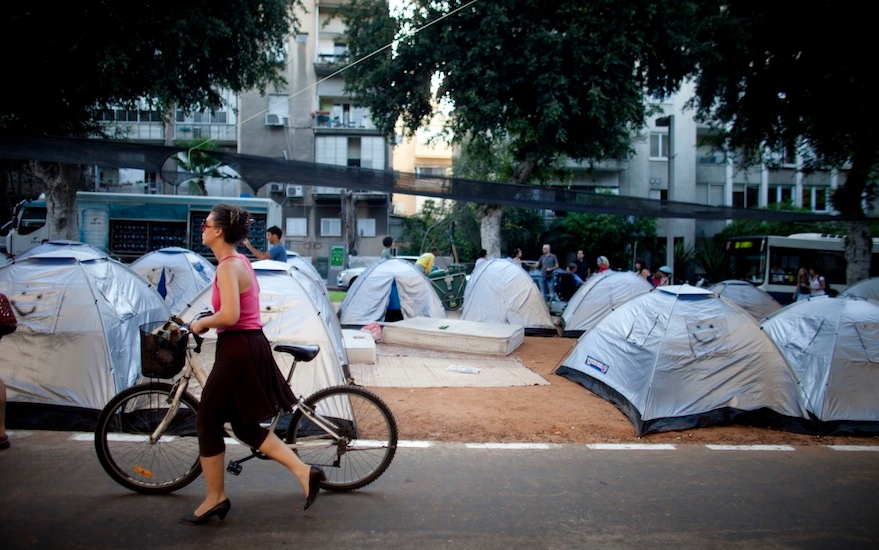 With news focused on Gaza, Iran and the West Bank, it can be easy to forget that Israel has problems within its borders, too. Though Israelis rarely do. Thankfully, we now have a 62-page booklet full of graphs and charts to remind us.

Published last week by the Taub Center for Social Policy Studies in Israel, a leading Israeli socioeconomic think tank, the report portrays a country where rents are rising, income gaps are vast, bureaucratic delays are legion and taxes are high. There’s also some good news.

Here are some takeaways about Israel’s domestic difficulties — and a few reasons for optimism.

Israel is as unequal as the U.S.: Months before the eruption of the Occupy Wall Street movement in New York in 2011, Israelis famously pitched tents on Tel Aviv’s Rothschild Boulevard and held a months-long protest of Israel’s wealth gaps and high cost of living.

And the U.S. and Israel have about the same level of income inequality, second only to Mexico among developed countries — at least as of 2011, the most recent year for which Taub has data. Israelis with the highest 10 percent of incomes, according to the report, made almost five times as much as those with the lowest tenth of incomes — though that gap was narrowing.

Food and housing prices have skyrocketed: There’s a reason that Israel’s new finance minister, Moshe Kahlon, centered his electoral campaign on housing reform. Real estate prices had risen nearly 60 percent in real dollars since 2008, with a slightly lower increase in rent prices. Part of the fault, the report says, lies with Israel’s bureaucracy: It takes 13 years to get new construction approved in Israel, as opposed to a few months in the European Union.

In 2005, meanwhile, food prices in Israel were 16 percent lower than the average among countries in the Organization for Economic Cooperation and Development, but by 2015 they had become 19 percent higher.

All sectors of Israelis — from haredim to Arabs — spend more than they make: It’s common for Israelis to gripe about “living in minus” — that is, with a negative bank account balance. Turns out, it’s a problem that cuts across population groups. Haredi Orthodox Jews’ expenses, on average, are 33 percent higher than their incomes, while for Muslims, the figure is 20 percent. Even non-haredi Jews, Israel’s most affluent sector, spend 4 percent more than they earn.

Israel has a big “shadow economy” — and taxes are to blame: Israel’s shadow economy, the portion of business that stays hidden from taxes and regulation, makes up about a fifth of Israel’s GDP. The blame, according to the report, lies with the high tax burden Israel places on small businesses. Israel taxes small businesses at an effective rate of nearly 58 percent — 6 percentage points higher than the OECD average.

Israel’s spending more on education — but it lags in dollars per student: Nearly 11 percent of Israel’s total government budget is dedicated to education — a number that has risen in recent years. But in terms of dollars per student, Israel lags behind the OECD, mostly because Israel has more children than most OECD countries. And classrooms are crowded: An average Israeli classroom has 28 students, as opposed to the OECD average of 21.

But more Israeli students are qualifying for college, and fewer are failing: In 2007, 46.3 percent of students passed Israel’s matriculation exam, a necessary prerequisite to enter college. By 2013, that number was 53.4 percent. And in 2006, 5.2 percent of Israeli students scored within the highest levels of the PISA, an international standardized test, while 36 percent performed poorly. By 2012, the percentage of “outstanding” students was up to 5.8, while the “weak” student rate fell to about 29 percent. The future, at least, is looking a little brighter.