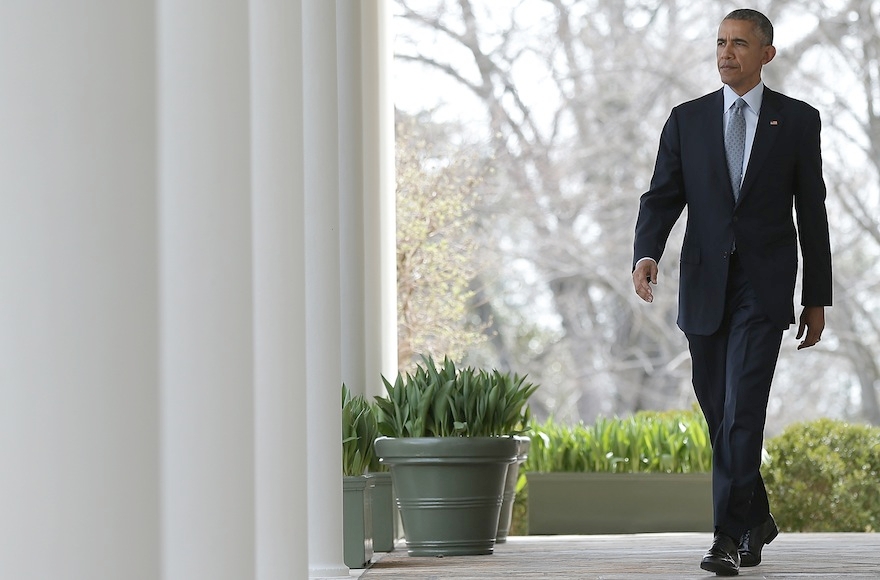 Obama walks to the Rose Garden to deliver remarks on the Iran nuclear negotiations on April 2, 2015. (Win McNamee/Getty Images)
Advertisement

WASHINGTON (JTA) — A bipartisan panel of former government officials including some of the most steadfast defenders of the Iran-nuclear talks led by the Obama administration say the emerging deal falls short of a satisfactory plan.

“We know much about the emerging agreement,” said the statement, organized by the Washington Institute for Near East Policy think tank. “Most of us would have preferred a stronger agreement.”

The signatories urge Obama’s negotiators to extend the June 30 deadline to get a better deal. “Stay at the negotiating table until a ‘good’ agreement that includes these features is reached,” the statement said, listing a number of bottom lines the major powers negotiating with Iran should preserve.

Among the bipartisan slate of 18 former officials are a number who have worked for the Obama administration and among these are several who until recently have vigorously defended its Iran strategy:

— Former U.S. Rep. Howard Berman (D-Calif.), who as chairman of the U.S. House of Representatives Foreign Affairs Committee in 2010 delayed a sanctions bill until the Obama administration had lined up backing for sanctions from other countries;

— Robert Einhorn, a top negotiator in Obama’s first term who has in recent years been a point man defending the Iran strategy in appearances before Jewish and Middle East policy groups;

— Dennis Ross, Obama’s top Iran adviser for much of his first term, who also has had a post-administration role in explaining Obama’s Iran policies;

— Gary Samore, the coordinator for arms control in Obama’s first term, who, like Ross, has been a go-to interviewee to explain Obama’s Iran strategy.

Also signing was Norm Eisen, the ambassador to the Czech Republic from 2011-2014 and a top fundraiser for Obama’s first election campaign; David Makovsky, a member of Obama’s Israeli-Palestinian peace talks team last year, and David Petraeus, the director of the CIA in Obama’s first term.

Also included are former George W. Bush administration officials, including his national security adviser, Stephen Hadley. But the inclusion of figures who helped shaped and who have defended the current strategy could sway congressional Democrats when approval of the deal is considered by Congress.

While saying they “know much” about the emerging deal, the signatories do not directly address its perceived inadequacies. Instead, they list bottom lines that a deal should include, suggesting that these may be absent:

— Nuclear inspectors “must have timely and effective access to any sites in Iran they need to visit in order to verify Iran’s compliance with the agreement,” including military sites and sites controlled by Iran’s Revolutionary Guards Corps

— The ability to review Iran’s past weaponization activity

— Strict limits on research and development into advanced uranium-enriching centrifuges

— Sanctions relief based on Iran’s performance, apparently a reference to reports that Iran will get some sanctions relief simply for signing the deal

— “Serious consequences” should Iran violate terms of the deal

“Most importantly, it is vital for the United States to affirm that it is U.S. policy to prevent Iran from producing sufficient fissile material for a nuclear weapon – or otherwise acquiring or building one – both during the agreement and after it expires,” the statement says. Obama administration officials have insisted that a number of key aspects of the agreement will be enforceable long after other provisions expire.

The statement also says there is “much to the argument” that a nuclear agreement would free Iran to expand its “bad behavior” in the region and counsels “doing more” to inhibit Iranian ambitions, including expanding U.S. military influence in the area.