Summertime, and the readin’ is easy 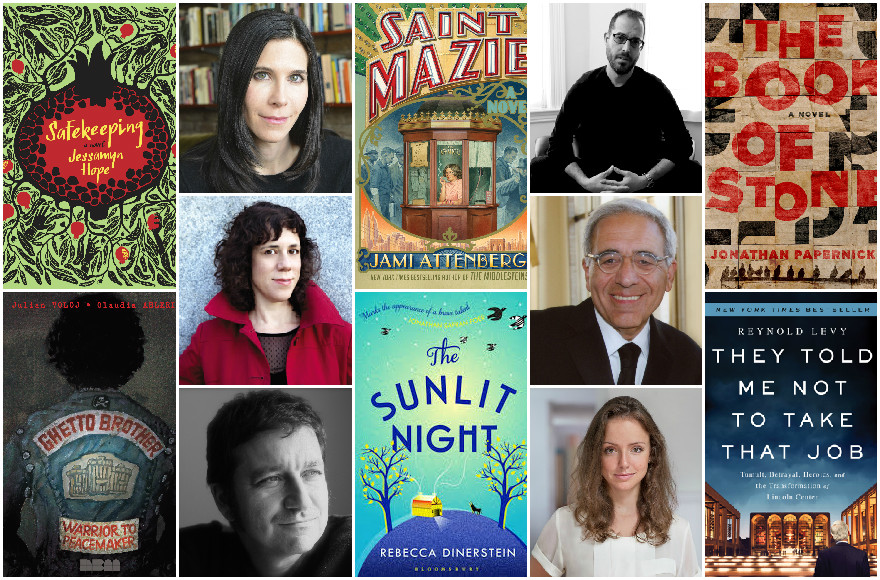 It’s summer, that time of year when everyone drops everything they’re doing, finds a quiet stretch of sandy shore and spends all day delving into their new favorite books. Or maybe not. But whatever your plans, there’s no denying that the season brings a bumper crop of literary offerings, plus an abundance of lists telling you which ones you “must read.” So here’s ours, a sterling selection of new books whose authors and/or themes provide some fun Jewish flair — just right for a beach read or an everyday coffee-break escape.

The prolific, 34-year-old Joshua Cohen presents his fourth novel in less than a decade, with a protagonist who is also a Jewish novelist named Joshua Cohen — only this nebbish is hardly prolific. With mounting debts, he agrees to ghostwrite the memoir of the eccentric, billionaire founder of a Google-like tech firm (who is, as it happens, also named Joshua Cohen). What follows is part thriller, part family drama and part sex comedy — but primarily it’s a pointed deliberation on what it means to live in the age of search engines, smartphones and constant surveillance.

“The Book of Stone” (Fig Tree Books)
By Jonathan Papernick

In the grey gap between good and evil, there’s almost always a great story. After his successful collections of short fiction, author Papernick has gone longform with this psychological thriller that explores the evolution of the terrorist mindset and the complexities of religious radicalism (and, yes, that’s radicalism of the Jewish kind). This may not be an uplifting tale of faith reconsidered — “The Book of Stone” ain’t Broadway’s “The Book of Mormon” — but it’s an engrossing read about a sorrowful soul whose search for meaning leads to a very dark mission.

When truth is more sensational than fiction, just fictionalize the truth — which is precisely what Levin did in “Compulsion,” the classic 1956 novel that reimagines, ever so slightly, the famous kidnap-murder case of Leopold and Loeb. Levin was the killers’ classmate at the University of Chicago and covered their 1924 trial for the Chicago Daily News. And though he changed names and details, his book (and the play and movie that followed) is generally recognized as paving the way for non-fiction novels such as Truman Capote’s “In Cold Blood.” Nearly a century after this “crime of the century,” Levin’s tale — in this new edition, with a foreword by O.J. prosecutor-turned-novelist Marcia Clark — is no less gripping or disturbing.

Here’s a fascinating, largely unknown story that’s told in a compelling, unexpected way. Set at the height of gang warfare in the South Bronx in 1971, this graphic novel depicts — through Voloj’s lively writing and Ahlering’s funky illustrations — the true story of Benjy Melendez. The son of Puerto Rican immigrants, Melendez founded the notorious Ghetto Brothers gang but eventually initiated a truce that spread across the borough and beyond. More than that, the Ghetto Brothers, also a band,  held weekly concerts — and this cross-pollination of creativity ultimately laid the foundation of hip-hop culture. Melendez eventually “retired” from gang life, focusing on reclaiming his roots after learning of his — wait for it — hidden Jewish background.

In 1994, an Israeli kibbutz filled with colorful, seemingly incompatible characters welcomes Adam, a drug-addicted New Yorker on a mission to right a past wrong: he must return a medieval sapphire brooch to his grandfather’s old flame, if only he can track her down. Hope’s debut novel draws on her own experiences living as an outsider on a kibbutz in the mid 1990s, but also delves back into turbulent moments in Jewish history. Spanning seven centuries and three continents, it’s one of those sweeping epics that’s easy to get swept up in.

With her fourth novel, Attenberg once again deploys the wit and sympathy that made 2012’s “The Middlesteins” such a big-hearted hit. Inspired by the life of a real Depression-era Jewish “saint,” the star of this Jazz Age tale is the bawdy and blunt ticket-taker at a popular Lower East Side movie theater who becomes a heroine to the homeless after the stock market crash. Mazie is a joy to meet and a marvel to behold, as her story emerges through a series of diary entries and snippets of interviews with people who knew her.

“Sick in the Head: Conversations about Life and Comedy” (Random House)
By Judd Apatow
Ever dream of having a sit-down with your heroes? Producer/director/screenwriter Apatow has been doing it for 30 years. Long before “Freaks and Geeks” and “Knocked Up,” the self-described “comedy nerd” was, as a host of a show on his high-school radio station, interviewing the likes of Jerry Seinfeld and Garry Shandling. And he’s never really stopped. Decades in the making, “Sick in the Head” is a collection of his funny, candid chats with dozens of the biggest names in comedy, from those who inspired him (Mel Brooks, Steve Martin) to those whose careers he’s nudged along (Seth Rogen, Amy Schumer, Lena Dunham). Come for the laughs, but stay for the soul-searching substance that spills out whenever talented, creative people start talking about why they do what they do.
The Sunlit Night (Bloomsbury USA)
By Rebecca Dinerstein
Yes, Dinerstein is a 20-something, Ivy-League grad whose debut novel sparked a bidding war; but get past your Jonathan Safran Foer Complex — in fact, he helped Dinerstein hone her manuscript — and you’ll truly appreciate this poetic novel about loneliness and growing apart from family and first loves. The setting is a barren, northern Norwegian landscape — not unlike the arctic archipelago Lofoten, where Dinerstein lived in an artists’ colony and composed the beginnings of this novel. There, at the top of the world, two distinctly drawn, heavy-hearted Jewish characters find humor and warmth in one another’s company. Yet it’s Dinerstein’s third protagonist, the nearly night-less Norwegian countryside, that provides much of the novel’s wonder.
“They Told Me Not to Take That Job” (PublicAffairs)
By Reynold Levy
As head of the International Rescue Committee in the 1990s, Levy dealt daily with desperate refugees and rogue dictators of failed states — all of which barely prepared him to orchestrate his greatest rescue mission, as president of Lincoln Center. When, against all advice, Levy took the helm in 2002, the country’s leading arts venue was a maelstrom of bitter rivalries, clashing egos and public embarrassments. His memoir relates what happened over the next decade, as he led a $1.2-billion transformation of both Lincoln Center’s 16-acre campus and its global reputation. It’s a good read — not just for arts enthusiasts wanting to indulge in juicy gossip (Levy unreservedly names names) but for anyone seeking lessons in leadership.

Seasons without song: How Jews are adapting to the sudden disappearance of communal singing