What shocked a European Jew on his first trip to America 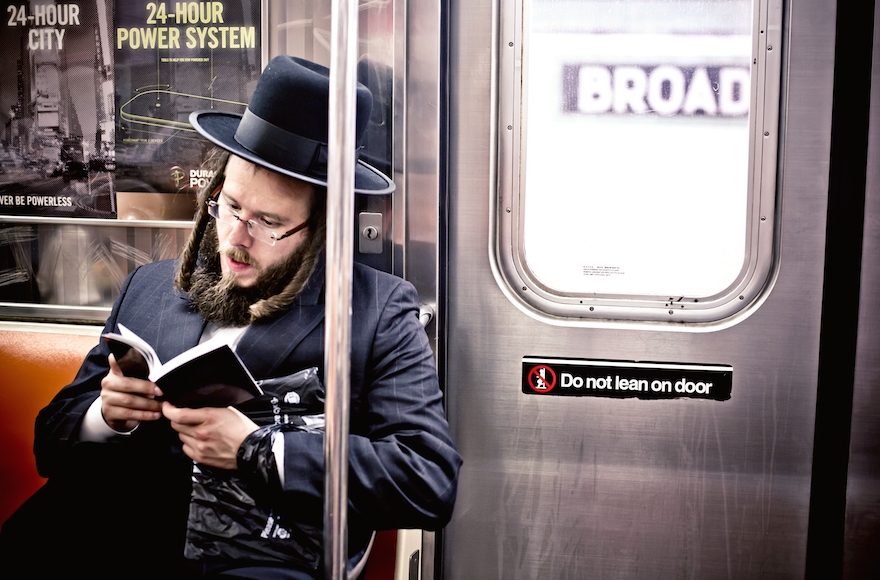 NEW YORK (JTA) — You may have seen them scanning the terminal, eyes wide with disbelief, on their first visit to Israel.

In my family we call their condition, which afflicts mostly young Jews from small Jewish communities, the Ben Gurion Syndrome — a sense of shock induced by encountering an entire society mostly made up of Jews.

We named it thus during the first-ever trip to Israel by my Belgian cousin, Elie, who remarked with amazement that, at Ben Gurion Airport, “even the taxi drivers are Jewish.”

Elie’s Israeli relatives, myself included, had a good laugh at his expense over that observation, which he made as a boy 25 years ago.

But last month, it was my turn to experience a version of that syndrome on my first visit to the United States.

Like Elie, I knew the basics. I knew America has about 6 million Jews who grew up in a pretty peaceful homeland with little experience of the secret-agent tactics forced upon Jews in Western Europe, who tend to hide their kippahs these days for fear of anti-Semites.

Although I have visited Jewish communities in more than 40 countries (including, in the past year alone, Turkey, Japan, Russia, Ukraine, Lithuania and France), I was taken aback by the diversity and confidence of American Jews. In the United States — or at least in the cities where I spent most of my time there, New York and Miami — being Jewish seems as effortless as it is in Israel.

The Ben-Gurion Syndrome first hit when I found myself chatting about Gaza with a group of Florida Jews — one of whom came to America in the 1940s, seeking refuge from Nazi Germany — at a café in Miami that my wife picked at random. It turned out to be owned by Venezuelan Jews. The wide-eyed syndrome lingered in New York, where I realized that no fewer than four people squeezed up against me on the subway were reading Hebrew scripture, not The New York Times.

Walking into a synagogue or Jewish community center without showing my passport or undergoing an airport-style security check felt weirdly out of place. And I was surprised when a lunch date kept his kippah on while walking to the restaurant only to take it off inside the non-kosher (but vegan) eatery (to avoid giving other observant Jews the false impression that it was a kosher-certified establishment). In Europe, I remarked, we do it exactly the other way around. 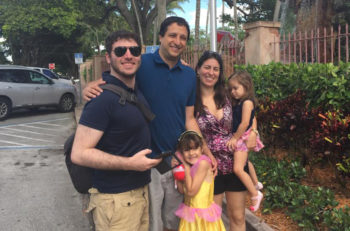 Cnaan Liphshiz, left, with Benny and Eva Lederman, two Brazilian Jews, and their two daughters in Miami, Florida, on May 9, 2015. (JTA/Iris Tzur)

The following day, the wealth of New York’s Jewish cultural life blew my mind as I grooved to the sounds of a Jewish rock brass band, Zion80, whose new album marries the music of Rabbi Shlomo Carlebach with that of Fela Kuti, the Nigerian protest singer.

On a stop in Savannah, Georgia, between my visits to Florida and New York, I caught a glimpse of something else, though. Amid Confederate flags and statues for Confederate generals, I was shocked but also inspired by American society’s tolerance for offensive narratives. And while my praises on this point may ring hollow following the horrific Charleston massacre, it still caught the attention of someone like me. I live in Europe, where a tweet questioning the Holocaust could get you jail time. I was born in Israel, where there’s a law against recognizing the Palestinian view of Israel’s creation as a catastrophe.

Back in the American Jewish comfort zone also known as New York, I began wondering why my American interlocutors would care at all about what I had come to talk to them about: anti-Semitism in Europe, the crisis in Ukraine and, inevitably, Israel. Why should the Jews of paradise care about the plight of Fabrice Schomberg, my neighbor in The Hague, whom authorities ordered to dismantle his sukkah for fear that it would attract vandals in our heavily Muslim neighborhood?

The warm Jewish hearts I found in America warmed my own, and took me by surprise. It was the first proof I found that Jews stick together not because of common threats of the sort that exist in Israel and Europe, but also because they choose to, even in near-optimal conditions.

Seeing American Jews’ level of engagement also informed my understanding of people like Al Schwimmer and Murray Greenfield — two U.S.-born Zionists and pioneers in pre-state Israel — and Ralph Goldman, the recently deceased leader of the American Jewish Joint Distribution Committee. In my interviews with these men, I never understood what made them take huge risks or make sacrifices they could have avoided because the thing was someone else’s problem. For their generation of American Jews and for others that followed, I realized, sitting silently by is just not an option.

Waiting for the flight back home from Kennedy airport, I found myself talking to a burly man with gold chains and rings, a green suede hat and a tough-guy persona. I was feeling a little bit uncomfortable when, after asking me what I do for a living, he told me that he had “a real problem with that.”

I cringed in expectation of the sort of anti-Semitic rant I sometimes hear in my work in Europe. But instead of delivering a hostile diatribe, my conversation partner pulled out two tzitzit fringes from the religious garment hid under his shirt and told me, “I’m Chabad, and I don’t think you guys at JTA are giving us a fair shake.”