On Iran deal, Hoyer’s red lines are not AIPAC’s 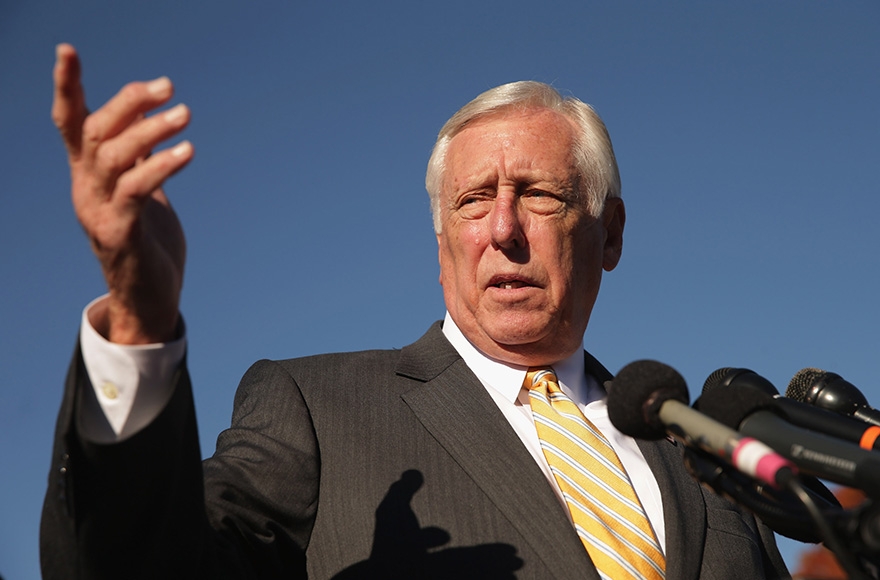 Ahead of the Iran deal, Steny Hoyer seems to have chosen Menu B, for backing it. Which is not good for plans by opponents to bury it.

A statement from the Maryland Democrat late Thursday drew its red lines from a bipartisan letter posted last week by the Washington Institute for Near East Policy. Hoyer’s statement differed in significant ways from the wish list circulated on Capitol Hill by the American Israel Public Affairs Committee. (The June 30 deadline for the plan was extended a week to July 7.)

The Washington Institute letter, from former Republican and Democratic officials, was tough on Obama and his negotiators — “most of us would have preferred a stronger agreement,” it said — but its red lines essentially comported with how Obama administration officials have described what the deal will look like.

Hoyer is the House minority whip, which is significant in itself. Republicans who overwhelmingly are skeptical of the emerging deal can reject the deal in a vote, but they don’t have the numbers by themselves to reach two-thirds and override Obama’s pledged presidential veto.

But Hoyer is also one of AIPAC’s closest friends in the House. He has led more than a dozen trips to Israel sponsored by AIPAC’s educational affiliate, the American Israel Education Foundation, over the years, many of them introducing freshmen members of Congress to the country. He is reliably the senior Democrat who joins a senior Republican each year on the AIPAC conference stage to joke that they disagree on everything, but they agree that the United States must back Israel through thick and thin.

And yet his statement pointedly embraces the Washington Institute letter’s language and does not cite the AIPAC memo.

“There is bipartisan consensus, with which I agree, endorsed by former Ambassador Dennis Ross, former National Security Advisor Stephen Hadley, former Rep. Howard Berman and other experts, that an acceptable agreement must include several specific components in order to close off Iran’s path to a nuclear weapon successfully,” Hoyer said, referring to the letter. “As I have said all along, I will be looking closely at the specifics of any final deal to make certain that it does so.”

Compare how he describes these specifics to the Washington Institute letter and to AIPAC’s memo:

• Hoyer wants “full and timely IAEA access to documents, people, and places where it suspects involvement in past or ongoing nuclear weaponization activities.” The demand for the inspections by the U.N.’s nuclear watchdog in the AIPAC memo is “anytime, anywhere.” Like Hoyer, the Washington Institute letter also uses the more flexible “timely” to describe the desired access to sites that inspectors need to visit or to information about the possible military dimensions of Iran’s program.

• Hoyer also wants “strict limits on advanced centrifuge research and development, ideally for at least twenty years.” That comports – more or less – with the Washington Institute letter’s demand that “the agreement must establish strict limits on advanced centrifuge R&D, testing, and deployment in the first ten years, and preclude the rapid technical upgrade and expansion of Iran’s enrichment capacity after the initial ten-year period.” The AIPAC memo explicitly rejects a 10- to 15-year time frame and instead says that “Iran’s nuclear weapons quest must be blocked for decades.”

Let me stress: This does not signal any kind of break between Hoyer and AIPAC. Hoyer’s divergences here from AIPAC’s lines are substantive but not radical.

But his statement lays out plainly that Hoyer will not whip for opposition to the plan based on AIPAC’s red lines. Coupled with the alignment of minority leader Rep. Nancy Pelosi, D-Calif., with backers of the plan, it’s hard to see many Democrats heeding calls to oppose.

It’s not clear yet whether AIPAC will lobby against the plan should it deviate from the group’s red lines as much as Hoyer does here. If AIPAC does try, however, it looks like the lobby will have a hard time breaking the veto-proof threshold.