With Europe drifting away, is Israel making new friends in the U.N.? 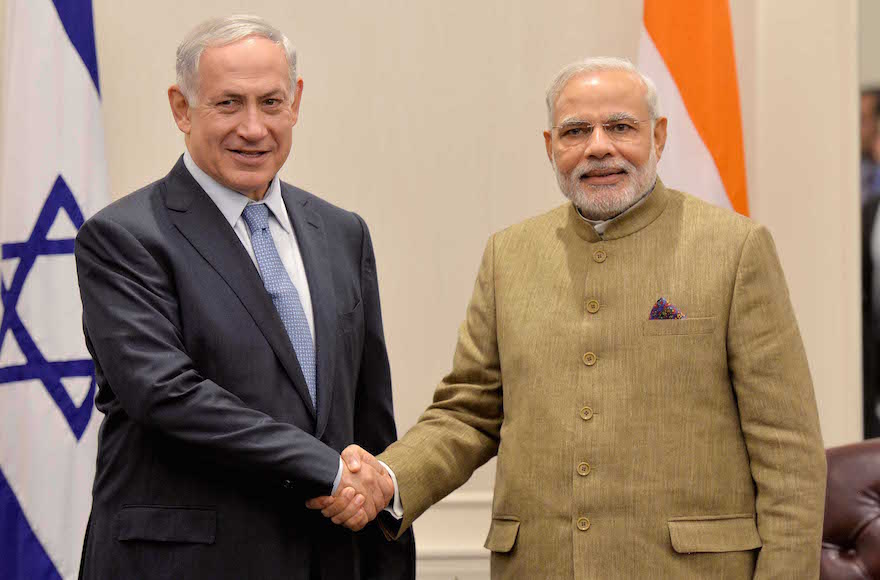 PARIS (JTA) — While significant, the vote by European countries in favor of adopting the latest United Nations report accusing Israel of possible war crimes in the 2014 Gaza war is neither unique nor particularly surprising.

More noteworthy were the abstentions by India and four other developing countries that have historically sided against Israel at the U.N.

In the vote Friday, all eight European Union member states that are currently represented on the U.N. Human Rights Council voted in favor of the report, which said both Hamas and Israel may have committed war crimes during their latest round of fighting.

The vote is not the first time EU countries have supported U.N. resolutions viewed as anti-Israel. The 2012 General Assembly vote on recognition of Palestine received a yes vote from 14 EU countries. Members also voted in favor of several controversial votes at UNESCO.

Yet Friday’s vote is significant because it underlines European countries’ growing alienation from Israel in its fight against Palestinian extremism, which many blame on the hardline politics of Prime Minister Benjamin Netanyahu.

In 2009, when the Human Rights Council voted on a resolution accusing Israel of “grave violations of human rights” in its offensive that year in Gaza — an earlier but similar version of the latest Gaza war — all EU member states on the council abstained, including Britain, France, Germany and the Netherlands.

All four countries voted in favor of adopting the report on the 2014 conflict. The United States alone voted against it. When it comes to Europe, the vote on Friday was, at this point, just more and worse of the same.

On the other hand, the abstentions by India, Kenya, Ethiopia, Macedonia and Paraguay were a unique development. These abstentions may be seen partly as return on Israel’s investment in opening new diplomatic horizons and strengthening relations with developing nations that, until recently, could be counted on to support even the most biased of anti-Israel texts.

In India’s case, the surprising vote is a departure from a long tradition of voting against Israel at the U.N., including in the 1947 General Assembly vote on the partition of Palestine and the infamous 1971 Resolution 3379, which defined Zionism as form of racism, before being revoked in 1991.

For sure, India’s abstention is no clear-cut achievement for Israel. To a large extent, it’s a reflection of the new line charted by India’s new prime minister, Narendra Modi, a Hindu nationalist with little interest in aligning with the U.N.’s Muslim bloc.

He also seems (Hebrew link) to have a soft spot for Israel, which he visited in 2006 as chief minister of the Indian state of Gujarat, and perhaps also for Netanyahu. When the Israeli premier won the March general election, Modi tweeted in Hebrew to congratulate him.

Still, the blossoming romance with Modi is part of a broader paradigm shift for Israel’s diplomacy machine under Netanyahu and his former foreign minister, Avigdor Lieberman. That ongoing shift has Israel investing in alliances east of Poland and south of Mexico and Egypt to complement its established, albeit troubled, relations with Europe and the U.S.

Not only is the Palestinian issue less central to countries with pressing economic needs and military conflicts of their own, but those needs and conflicts mean that they have a stake in befriending the weapon-producing, technologically savvy Jewish state.

In a 2011 position paper (Hebrew link), Zalman Shoval, a former Israeli ambassador to Washington, made the case for such a shift, writing: “The decrease in the power and influence of the United States and Europe is evident and serves to compound the potential power of new powers like China, India and Brazil.”

Under Lieberman, Israel has actively wooed India, Japan and China, as well as African and former Soviet Union states, even as its relations with the European Union and the U.S. have continued to deteriorate.

In Japan’s, this led last year to the signing of several joint memoranda for closer trade ties and, for the first time, security cooperation. Bilateral trade with Japan last year rose by 10 percent, to $1.75 billion.

This effort hasn’t always paid off at U.N. votes. Japan, for instance, abstained during the 2009 war crimes vote at the Human Rights Council but voted in favor of the report on the 2014 war.

In China’s case, Jerusalem achieved a breakthrough only last week, joining a signing ceremony for the Asian Infrastructure Investment Bank in Beijing. For a nation that was booted out of the Asian soccer federation for political reasons in the 1970s, such invitations are nothing short of revolutionary.

In South America, the Israeli cabinet in May launched a program to strengthen ties with the Pacific Alliance of Chile, Colombia, Mexico, Peru and other Latin American countries.

Conditions are seen as ripe for the Israeli move because of the dramatic fall of oil prices in recent years and the U.S.’s entry into the production of shale oil.

That and the turmoil that followed revolutions in the Arab world significantly lowered Arab oil producers’ bargaining power and ability to force third parties to boycott Israel, as those producers had done since the 1970s. This in turn is allaying fears in oil-thirsty economies like India and China of the possible ramifications of doing business with Israel.

But do such gains mean Israel should invest in new horizons at the expense of its Western focus?

Zvi Mazel, a former Israeli ambassador to Sweden and Egypt and former head of the Israeli Foreign Ministry’s Africa division, thinks it is premature for such talk.

“Israel is a Western country, that, despite sometimes treacherous behavior by its Western kin societies, still belongs in that slot culturally, conceptually and economically,” he said. “That said, new alliances need to be cultivated as a long-term investment, and it is already beginning to pay off.”