A ‘Fiddler on the Roof’-inspired refugee camp for Ukraine’s Jews? 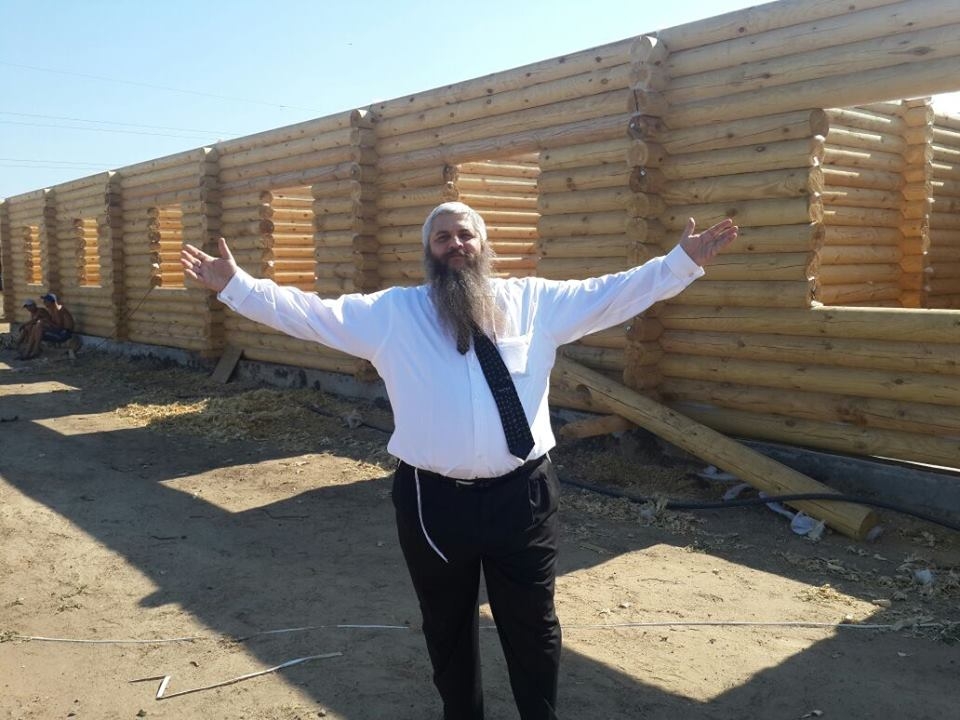 (JTA) — The Jewish refugee village of Anatevka, Ukraine, is so new it doesn’t even officially exist yet.

Due to open in September, the Anatevka Jewish Refugee Community hadn’t received much attention in the Jewish media until last week, when its developers began raising funds for the $6 million project — designed for Ukrainian Jews displaced by the war ravaging the country’s east.

Still, you may be thinking, Anatevka sounds familiar. You’re right: It’s the fictional hometown of Tevye the Dairyman from Joseph Stein’s hugely famous “Fiddler on the Roof” musical. Tevye lived in czarist Russia, which included much of what is now Ukraine.

But the project’s manager, U.S.-born Yeshiva University graduate Chaim Klimovitsky, said the name is not a branding move to bring in donations from Jewish-Americans. Rather, he said, it’s the product of circumstance.

“There’s a little village called Gnativka adjacent to the piece of land bought for the camp,” Klimovitsky said, explaining that Gnativka is the Ukrainian pronunciation of Anatevka. “It’s not that we decided to rebuild a fictional village. We couldn’t call it anything else.” 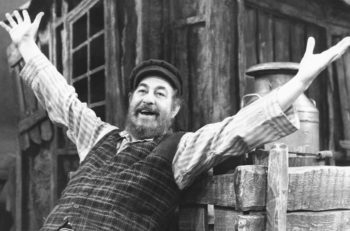 A scene from “Fiddler on the Roof” at the Wimbledon Theatre in London, Feb. 22, 1980. (Graham Turner/Keystone/Getty Images)

Klimovitsky started working on the project at the behest of Moshe Azman, a prominent rabbi from Kiev who broke with the Chabad-Lubavitch Hasidic movement in the 1990s to start his own operation.

Azman’s English-language fundraising website for Anatevka similarly emphasizes the connection with Gnativka rather than Tevye’s village.

“The buildings are being constructed from wood, to recall the wooden dwellings of the pre-World War II village of Anatevka,” the project’s website says — promising a Jewish village, or shtetl, like the one that existed near Gnativka before the Holocaust.

Tellingly, though, an illustration of the community’s future synagogue on the website has been embellished with the silhouette of a fiddler on the roof. And Tevye was imagined to live in a pre-World War II village with wooden houses, too.

In another promotional image on the website, Azman is seen posing in front of six unfinished wooden houses, extending his arms as if to greet newcomers.

Many of the would-be residents of Anatevka currently reside in a summer camp that Azman’s congregation, locally known as the Brodsky Synagogue community, owns 120 miles south of Kiev, near the city of Shpola.

Location-wise, Anatevka would be an upgrade for its proximity to the capital, with its job opportunities and Jewish community centers. 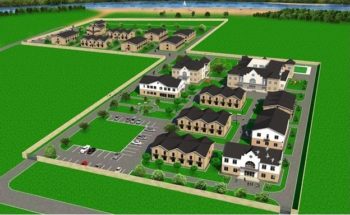 An image of the building plan for Anatevka, near Kiev. (Courtesy of Anatevka)

Like other Ukrainian Jewish congregations, the Brodsky community has been swamped with requests for assistance since last year, when fighting between pro-Russia militiamen and government troops erupted in cities like Lugansk and Donetsk, forcing thousands of Jews and many more non-Jews from their homes.

Stretching budgets that were already dwindling because of war-related losses to donations, Jewish communities in Dnepropetrovsk, Kiev, Odessa, Kharkiv and elsewhere rose to the challenge presented by the flow of refugees and opened their facilities to the displaced.

The American Jewish Joint Distribution Committee and Chabad also converted summer camps like the one near Shpola into refugee centers housing thousands who left with nothing. It was a major drain on the resources of a community of some 300,000 people.

Each Jewish refugee family was given shelter and food for a few weeks, during which they were encouraged to find an alternative solution — including immigrating to Israel — to free up space for other families.

Anatevka, however, aims to provide a more permanent solution, according to Klimovitsky.

“We’re planning 76 apartments for long-term living, free of charge until the tenants find a job, at which point we’ll ask them to pay for utilities only,” he said.

While Anatevka’s backers are clearly doing a major mitzvah, some in the Ukrainian aid world question their approach. The wooden houses at Anatevka won’t work as permanent abodes during the harsh Ukrainian winter, according to Rabbi Yechiel Eckstein, founder of the International Fellowship of Christians and Jews, whose organization is the single largest donor for Jewish relief efforts in Ukraine. 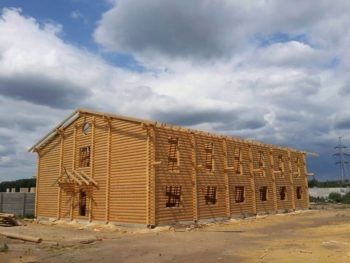 The first building in Anatevka under construction. (Courtesy of Anatevka)

Eckstein, whose group has poured millions of dollars into special aid for the refugees and funds the Chabad-run Zhytomir Jewish refugee camp 90 miles west of Kiev, said that Anatevka doesn’t address Ukrainian Jews’ most urgent needs.

“From what I hear, that place is not what’s needed,” he said about Anatevka. “Nothing ‘sexy,’ with wooden houses, is needed. What’s needed is food, medicine for existing projects, not new ones.”

Back in Ukraine, Rabbi Pinchas Vishedsky, the exiled chief rabbi of Donetsk, said that more could be done for the refugees by subsidizing rent for them in Kiev, as his community has done with help from Eckstein’s fellowship.

Azman, Vishedsky said, “has been planning to found a Jewish village for years.” The refugee situation “maybe is an argument for Azman to raise funds for this purpose.”