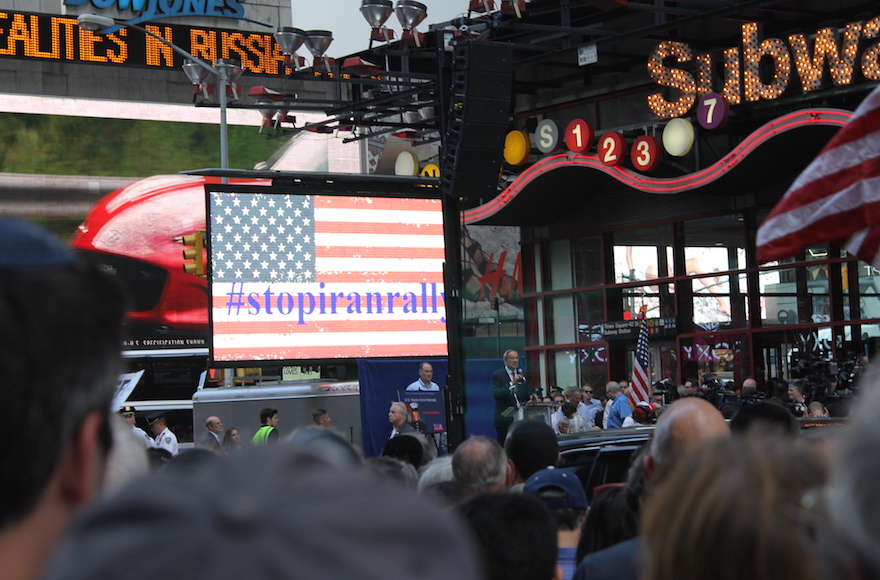 (JTA) — New York Sen. Chuck Schumer was not actually in New York on Wednesday, but the Democrat’s influence on the fate of the Iran deal loomed large when several thousand people descended on Times Square to protest the agreement.

Many of those demonstrating against the agreement chanted “Where is Chuck Schumer?” and “Kill this deal.” Some who packed the sidewalks along Seventh Avenue also held up signs that urged Schumer to convince Congress members to vote against the deal reached July 14 between Iran and six world powers to limit Iran’s nuclear program in exchange for sanctions relief.

The most senior Jewish senator is in a tough position: The Iran deal forces him to straddle his allegiances to his political party and the large Jewish constituency he serves in New York. Schumer, who hopes to assume the party’s leadership once Sen. Harry Reid, D-Nev., retires next year, is thought to have considerable power to influence other key Democratic lawmakers. 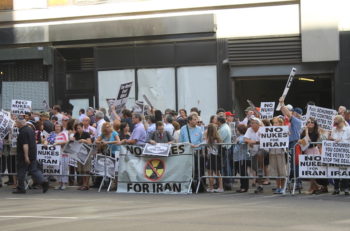 Some of the thousands of protesters in Times Square protesting the Iran nuclear deal, July 22, 2015. (Gabe Friedman)

The demonstration was organized by the Jewish Rapid Response Coalition in partnership with more than 100 Jewish and pro-Israel organizations, including the Simon Wiesenthal Center, StandWithUs, Christians United for Israel and the Zionist Organization of America.

One rally-goer, Benjamin Goldman, 22, said he had little hope the event would sway the vote. Congress has two months to review the deal, but President Barack Obama has said he will veto any legislation that opposes the deal. The two-thirds majority in both houses of Congress needed to override a presidential veto would be difficult to reach.

“I hope that Schumer creates a coalition that’s powerful enough to overturn it,” Goldman said. “We can only hope.”

Jeffrey Wiesenfeld, a volunteer event chair and a trustee of the City University of New York — he once tried to block playwright Tony Kushner, who has expressed views critical of Israel, from receiving an honorary degree — declared at the podium that “Chuck Schumer is going to hear us!”

Dershowitz argued that opposition to the deal would only succeed if it includes both Democrats and Republicans.

The rally’s speakers were almost invariably loud and impassioned, and the evening was lively from the start. A large group of Hasidic men scuffled with police officers, who wanted them to stay on the sidewalk. In addition to the continual chants of opposition to the Iran deal, a group of teenage boys danced and sang “Shalom Aleichem.” 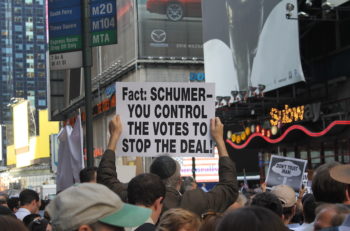 “This deal gives the [Iranian] mullahs $150 billion as a signing bonus,” the conservative journalist Caroline Glick said from the podium. “As my grandmother from Brooklyn would say, that’s real money!”

Julia Greenberg, 48, of Brooklyn, compared Iran to the former Soviet Union, which was hostile to the Jewish community.

“Being a Russian Jew, it’s very close to home,” she said. “I understand the danger and Israel is in my heart.”

Greenberg was skeptical of rallies like the one in Times Square to avert a deal.