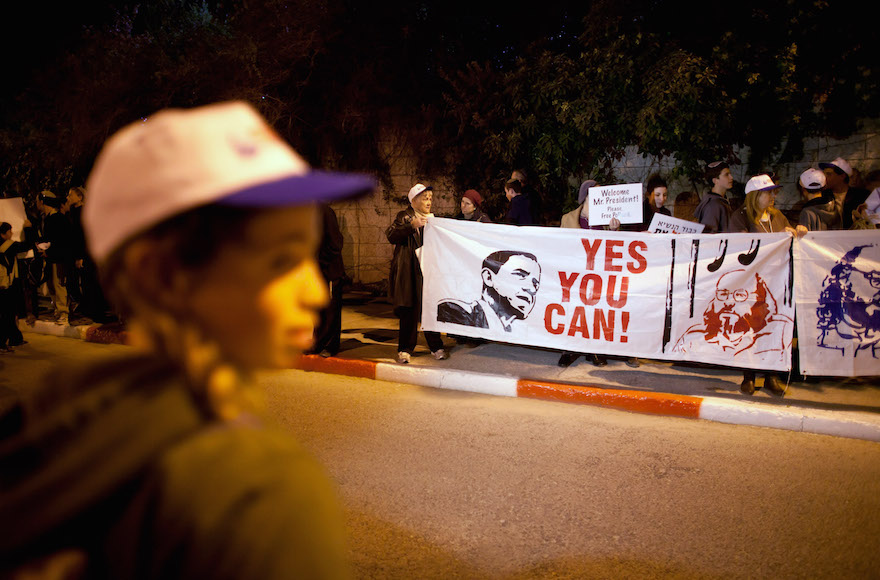 Israelis call for the release of Jonathan Pollard during a demonstration outside the Israeli President's residence on March 19, 2013, in Jerusalem, Israel. (Uriel Sinai/Getty Images)
Advertisement

JERUSALEM (JTA) — Anne Pollard, Jonathan Pollard’s ex-wife, said the Israeli government should pay for a top attorney to represent him at his parole hearing in November.

“I just want to see him out, I can’t bear it anymore, that he sat and lost all of his life in jail, it’s a crime, it’s such a crime,” she said Saturday night in a television interview with Israel’s Channel 2.

She said there was “no official word” from the United States as to when her former husband would be released.

The Justice Department told JTA on Saturday that Jonathan Pollard was eligible for mandatory parole on Nov. 21, unless the parole board objects. In 1987, he was sentenced to a life term for spying for Israel. He was working at the time of his arrest in 1985 as a civilian U.S. Navy analyst.

Anne Pollard called on the Israeli government to provide funds “so that Jonathan can hire a top, top-notch attorney” to help him through the parole hearing. She said she was “100 percent” sure that her ex-husband would want to move to Israel.

“Otherwise nothing would make sense to him,” she told Channel 2. “What would he destroy his life for if not to live in his own country.”

It’s not clear whether Jonathan Pollard would be able to travel immediately to Israel once he is paroled. For years he had sought a presidential commutation of his sentence in part because his movement could still be restricted under parole.

The Wall Street Journal on Friday reported that Pollard may be released in the next few weeks or by Nov. 21, the date he is officially eligible for parole under rules in place when he was sentenced to life in 1987.

The newspaper quoted administration officials as saying that they hoped the release would help smooth relations with Israel, fraught in recent weeks because of the nuclear deal between Iran and the major powers. But U.S. officials have publicly stated that Pollard’s release is not related to the Iran deal.

“Under the laws in place at that time (and which are currently applicable to Pollard), a person with a life sentence is presumptively eligible for mandatory parole after 30 years unless the Parole Commission ‘determines that he has seriously or frequently violated institution rules or that there is a reasonable probability that he will commit any Federal, State, or local crime’,” the Justice Department said in the statement sent to JTA. “Pollard is eligible for mandatory parole in November 2015.”

U.S. Attorney General Loretta Lynch said on Saturday at a security conference in Aspen, Colorado, that the Justice Department “will not interfere in the case.” She denied any link between Pollard’s possible release in the near future and the nuclear agreement signed with Iran, which Israel vehemently opposes.

Anne Pollard and her elderly father were brought to Israel in 2010 after they were discovered to be living in a one-bedroom apartment in New York in dire financial and physical condition. She reportedly called the Israeli Consulate in New York requesting help, and Prime Minister Benjamin Netanyahu, upon being apprised of the situation, ordered her to be taken care of.

Jonathan Pollard divorced his wife in part so she could move on with her life. He remarried while in prison.