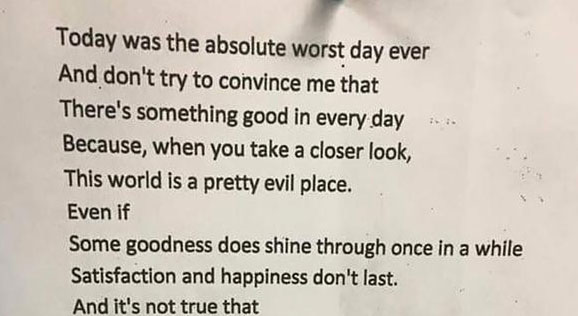 A portion of the poem written by
Advertisement

(JTA) — A poem by a Hasidic teenage girl from Brooklyn has gone viral on social media.

“Worst Day Ever?” by Chanie Gorkin was first posted last year on the Poetry Nation website, where Gorkin is a member. The poem was published in a collection of poems titled “Beyond the Sea: Odyssey” and put Gorkin, of the Crown Heights neighborhood, in the semifinals of the website’s July to December 2014 contest.

A copy of the poem, about a day in Gorkin’s life, was hung last week on a grocery store bulletin board, photographed and posted online. It was shared and liked thousands of times on social media, according to Poetry Nation.

Several days later Gorkin, an 11th-grader at the all-girls Lubavitch high school Beth Rivkah in Crown Heights, was identified as the author. The poem reportedly was written for a class assignment.

The work sounds pessimistic when read from top to bottom, but the reader is instructed at the end to reread it from the bottom up to find out how Gorkin really felt about her day.

It reportedly has been translated into several languages, including Hebrew, Chinese and Russian.

Gorkin’s mother, Dena, who first shared the poem on her Facebook page without crediting her daughter as the author at the teen’s request, told Poetry Nation that her daughter does not even know yet about the success of her poem since she is at summer camp and does not have access to a computer or the Internet. Dena Gorkin said she was “glad that it’s having a positive effect on people.”