2 suspects to be indicted in alleged arson on historic church 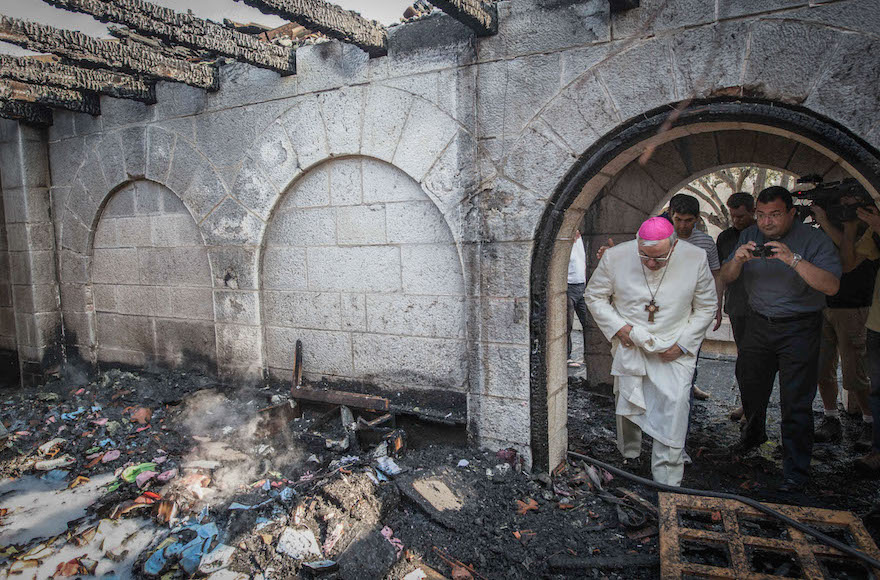 Giacinto-Boulos Marcuzzo, the Roman Catholic Auxiliary Bishop of the Latin Patriarch of Jerusalem, inspecting the torched Church of the Multiplication at Tabgha, June 18, 2015. (Basel Awidat/Flash90)
Advertisement

JERUSALEM (JTA) — Two suspects in the alleged arson attack on a historic church in northern Israel are slated to be indicted.

The indictments stemming from the June 18 attack on the Church of the Multiplication of the Loaves and Fishes are scheduled to be handed down Wednesday in Nazareth Magistrate’s Court, Haaretz reported. The suspects have been in jail since their arrest earlier this month.

Two other suspects were released on bail and one remains in custody until at least Tuesday.

Police initially detained 16 youths, reportedly all Jewish residents of the West Bank who were hiking in the area on the evening before the attack.

Along with the fire that struck the church, located on the northwest shore of the Sea of Galilee, graffiti reading “False idols will be smashed” and “pagans” were found on its walls. The site is where Jesus is believed to have fed thousands of people with five loaves of bread and two fish.

Built on the site of a fifth-century church, the church contains restored mosaic floors from the time period.

The fire reportedly damaged the church’s roof and structure and burned hundreds of books, according to Haaretz.

Meanwhile, a crowdfunding initiative launched by Knesset Speaker Yuli Edelstein as of Monday had raised nearly $15,000, or more than its goal of 50,000 shekels, for repairing the church.

The initiative was endorsed by more than a dozen Israeli rabbis, and the funds raised are being matched by what the initiative describes as an “important Jewish North American organization.”