What Huckabee could learn from Bibi about Holocaust analogies 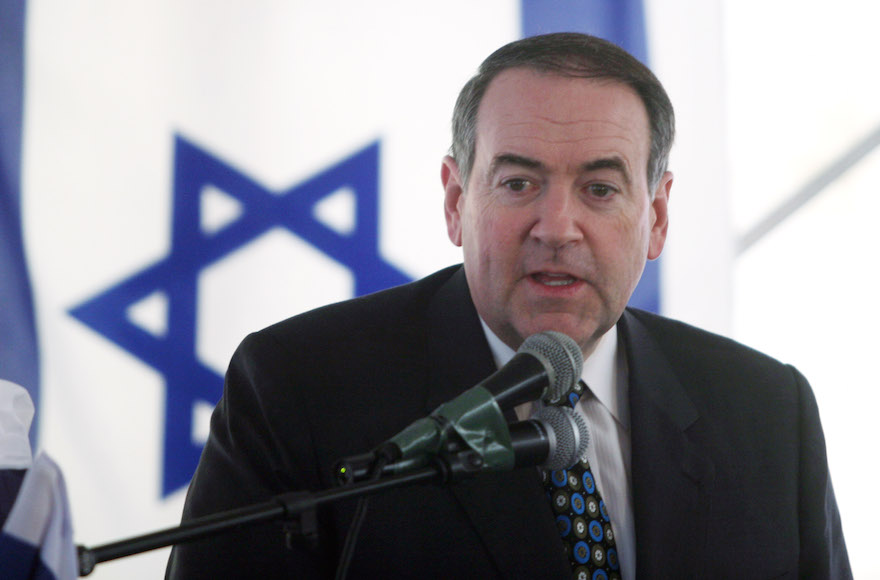 Much of the outrage over Mike Huckabee’s Holocaust-Iran analogy was about sense and sensibility.

First, sensibility. Sure, Prime Minister Benjamin Netanyahu compares the ayatollahs to the Nazis all the time — and warns that permitting them a pathway to the bomb is opening the door to another Holocaust. But in Netanyahu’s analogy, the Obama administration and the West are playing the role of Neville Chamberlain. Huckabee, on the other hand, cast President Barack Obama as Hitler when the Republican presidential hopeful declared that the Iran deal “will take the Israelis and march them to the door of the oven.” And even some major critics of the deal think that’s more than a little unfair.

As for sense, Huckabee’s comment just made it tougher for Israel and its allies in Washington to round up Democratic votes needed to override a presidential veto.

“Respected Mr. Huckabee: Nobody marches the Jews to ovens anymore,” Katz said. “To this end we established the State of Israel and the IDF; and, if need be, we will know how to defend ourselves, by ourselves.”

Katz’s response speaks to a deeper, longstanding tension in the Israeli psyche over the Holocaust and its relevance to modern-day Israel.

The Holocaust, to put it lightly, is still a salient issue for Israelis.

Some Israelis mock Netanyahu for his dire pronouncements on Iran — but in bringing up the Holocaust, he’s of a piece with Israeli culture. This is a country where the equivalent of “Saturday Night Live” ran a sketch that was one long Holocaust joke. It’s a place where a Holocaust survivors’ party has contested national elections, and where protesters invoke the Holocaust in service of their cause — whether it’s religious traditionalism or the settlements.

The enduring salience of the Holocaust is why foreign dignitaries visit the Yad Vashem Holocaust museum when they come to Jerusalem, and why a recent poll found that nearly half of Israelis are worried about the state’s destruction.

But that fear is coupled, perhaps paradoxically, with confidence in the Israel Defense Forces’ ability to beat back any threat. After decades of near-constant war, Israelis know their country is a regional military power, and they’re proud of it. Among Netanyahu’s critics, some roll their eyes at his constant Holocaust analogies because they see it as using the Shoah to score political points. Others object to any analogy that puts mighty Israel in the same boat as the Jews of Europe.

Just ask Michael Oren, who preceded Ron Dermer as Israel’s ambassador to the United States. In his new book, Oren recounts being scolded after he warned in an interview that “Iranian rulers could accomplish in a matter of seconds what they denied Hitler did — kill 6 million Jews.”

Ehud Barak was Israel’s defense minister and a leading hawk on Iran, but he called Oren to complain.

“Israel can defend itself. Period,” Barak said, packing about a century’s worth of Zionist machismo into four words and a punctuation mark.

This tension is even apparent in Netanyahu’s own rhetoric.

At the same time that he was insisting on his need to seize the chance to speak to Congress about the dangers of the emerging Iran deal because it represented a Nazi-like threat to Israel, he was telling French Jews to come to Israel where they would be safe.

When Netanyahu finally did speak to Congress in March, he sounded both themes. First he lamented that the world hadn’t learned the lessons of the Holocaust. But immediately afterward he said, “the days when the Jewish people remained passive in the face of genocidal enemies, those days are over.” Later he added, “Even if Israel has to stand alone, Israel will stand.”

That’s a lot to keep in mind next time Huckabee makes a Holocaust analogy. Of course, next time he feels the urge, his critics would probably counsel a simpler course: never again.