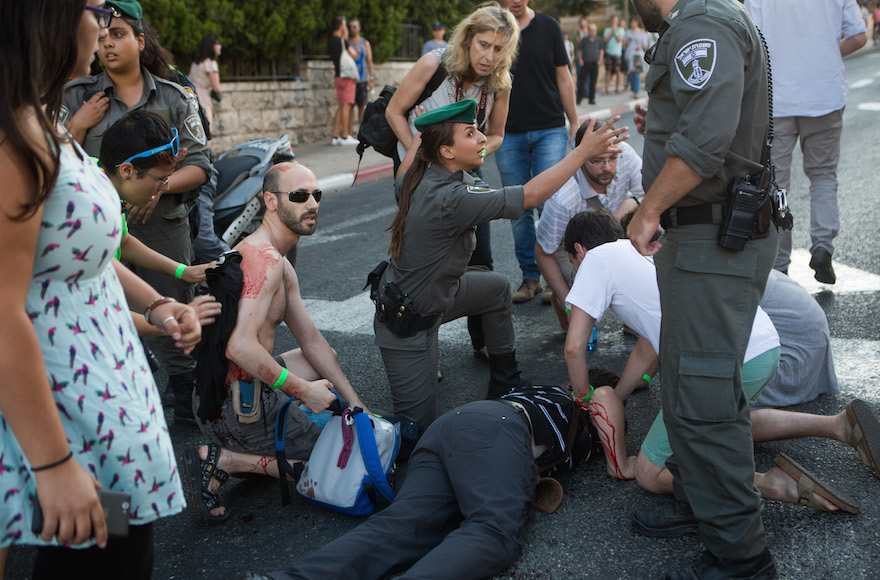 JERUSALEM (JTA) — Six marchers were stabbed at Jerusalem’s annual gay pride parade — allegedly by the man who stabbed three people at the parade in 2005.

One victim in Thursday’s stabbings was in critical condition and two were in serious condition.

The alleged assailant — Yishai Schlissel, a haredi Orthodox man from Modiin Ilit in the West Bank — is in custody. He reportedly used a kitchen knife.

Schlissel was released from prison two weeks ago for the previous attack, according to the Jerusalem Open House for Pride and Tolerance. Upon his release, he reportedly distributed pamphlets that called on “all Jews faithful to God” to risk “beatings and imprisonment” in order to stop the parade, according to Haaretz.

The injured were treated on the scene before being evacuated to local hospitals.

Thousands participated in the 14th annual Jerusalem March for Pride and Tolerance, which went through the center of the city. The parade continued after the violence, with hundreds of police and Border Police officers placed along the route to protect the marchers.

Prime Minister Benjamin Netanyahu was among the Israeli leaders to condemn the attack. He was joined by President Reuven Rivlin and Jerusalem Mayor Nir Barkat.

Netanyahu said in a statement: “In the state of Israel the individual’s freedom of choice is one of basic values. We must ensure that in Israel, every man and woman lives in security in any way they choose. That’s how we acted in the past and how we’ll continue to act. I wish the wounded a speedy recovery.”

Rivlin made his remarks at a public event on Thursday night.

“People celebrating their freedom and expressing their identity were viciously stabbed. We must not be deluded; a lack of tolerance will lead us to disaster,” he said.

Barkat in a statement said: “In Jerusalem, there is a place for everyone and together with the Israeli Police we will continue to target anyone who violently attempts to hurt others. We will continue to staunchly support all of Jerusalem’s communities and groups.”

Zehava Gal-On, head of the left-wing Meretz party, in a Facebook post called on Netanyahu to “stop the public atmosphere that makes possible the shedding of blood among Jerusalem’s pride (gay) community.”

Israel’s chief rabbis and the head of the Sephardic Orthodox Shas party also condemned the attack.