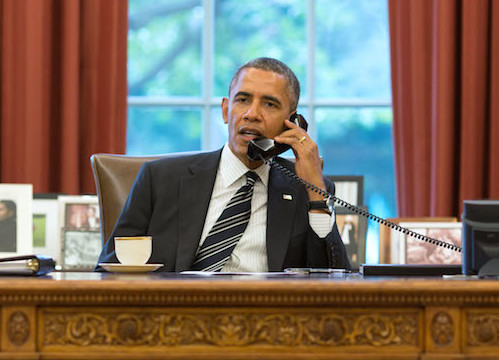 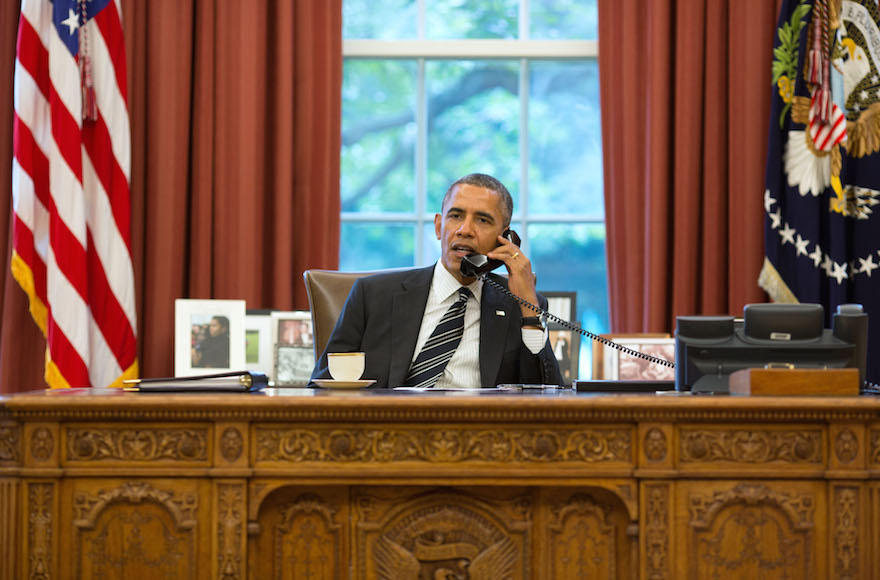 WASHINGTON (JTA) — In a phone call with supporters on Thursday, President Barack Obama characterized opponents of the Iran deal as being backed by “billionaires” and urged those listening in to win over “squishy” lawmakers considering opposing the deal.

Opponents “would be opposed to any deal with Iran,” Obama told the supporters, who were invited to the 20-minute phone call through an array of liberal organizations backing the international nuclear agreement.

The president said arguments against the deal are coming “partly from the $20 million that’s being spent lobbying against the bill on TV ads” and “partly from the same columnists and former administration officials that were responsible for us getting into the Iraq war.”

The $20-million figure apparently refers to Citizens for a Nuclear Free Iran, a group affiliated with the American Israel Public Affairs Committee that has raised at least that much for advertisements to persuade members of Congress to kill the deal.

J Street, a liberal Jewish Middle East policy group, has raised over $4 million to run its own ads in support of the deal.

“The lobbying that is taking place on the other side is fierce, it is well financed, it is relentless,” the president said on the phone call.

Obama framed the fight for the Iran deal as a chance to prevent another war like the one the U.S. undertook in Iraq in 2003. “One of the frustrations that I’ve always had about the run-up to the Iraq war was that everybody got really loud and really active after it was too late as opposed to on the front end,” he said.

“As big of a bully pulpit as I have, it’s not enough. And if you’ve got a whole bunch of folks who are big check writers to political campaigns, running TV ads, and billionaires who happily finance SuperPACs and they are putting the squeeze on members of Congress, even well-meaning ones, and good folks, and they don’t hear from you, this opportunity could slip away.”

Congress has the power within the next two months to kill the July 14 agreement between world powers and Iran, which gives Iran sanctions relief in exchange for restrictions on its nuclear program. But opponents of the deal must muster two-thirds majorities in both chambers of Congress to override the veto Obama has promised of any would-be deal-killing bill.

In line with the government of Israel, most Republicans oppose the deal. As a result, the battle for votes is focused on Democrats — with the deal’s supporters and opponents vying to secure commitments from the party’s lawmakers to vote one way or another.

Obama, who met Wednesday evening with members of the U.S. House of Representatives Democratic caucus, said he sensed some Democrats were wavering.

Obama defended the deal, and did not stint in describing Iran as still dangerous to Israel. But he said the deal was the best guarantee of keeping Israel safe.

“We are promoting the U.S. and Israel’s security,” he said.

Earlier Thursday, Rep. Nancy Pelosi, D-Calif., the leader of House Democrats, said she was confident she had the numbers to defeat any veto override.

“I’m confident because of the nature of the agreement,” Pelosi said at her weekly briefing with reporters. She suggested that Democrats who voted to override the veto would face political consequences, another allusion to the vote before the Iraq war.

“Overwhelmingly, Democrats in the House voted against that, but for those who didn’t it’s serious gum stuck to their shoe,” she said. “It’s your vote that you’re going to be held accountable for.”

Again prefiguring Obama’s remarks, Pelosi cast the fight as being against a well-funded opposition and alluded to the TV ads run by Citizens for a Nuclear Free Iran.

“The outside will have endless money, $40 million to spend on TV and going door to door to poison the well on this,” she said.