A year after Gaza war, border communities are growing 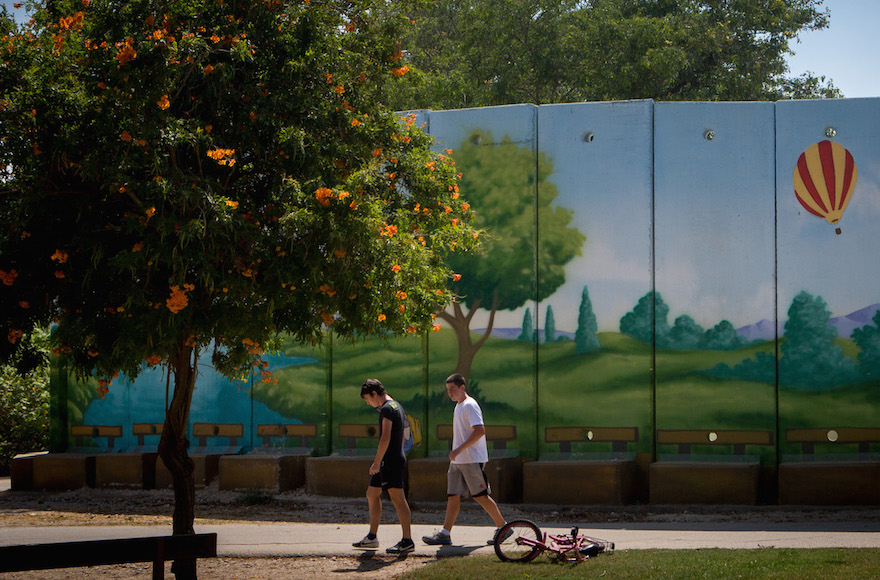 TEL AVIV (JTA) — Few communities were as battered during last summer’s conflict between Israel and Hamas as Nahal Oz, a kibbutz of some 350 people located just a mile from the Gaza border.

At one point in the fighting, 40 missiles landed on the community in a single day. Hamas militants attempting to infiltrate the kibbutz through a tunnel killed five Israeli soldiers. For much of the war, families with young children were evacuated to other communities far from the fighting. And  just four days before the war’s end, 4-year-old Daniel Tragerman was killed by a mortar outside his kibbutz home, dealing one last heavy blow to the community’s morale.

Nahal Oz is still recovering from the trauma of the war. But one year after it was a virtual ghost town, the kibbutz is not only functioning, it’s growing. And the same story is repeated throughout the Gaza border communities. Fifteen years of near constant rocket fire have not deterred families from moving to these small agricultural towns, known here as the Gaza Envelope.

“What we felt here, we didn’t feel anywhere else in Israel,” said Tom Oren-Denenberg, 40, who moved to Nahal Oz in November with his wife, Yael. “The moment you get here, you feel people’s warmth. You feel there’s a warm, embracing community. You feel it in the air.”

In nearly a year since the war, the Eshkol Regional Council, comprising the Gaza Envelope’s southern half, has seen its population of approximately 12,000 grow by 516 people — a significant jump over the increase of 373 in 2013. Shaar Hanegev Regional Council, to Eshkol’s north, has dozens of new housing units under construction and waiting lists for more that are still being planned.

Even Nahal Oz, which saw a drop in population after the war, has more than bounced back. Sixteen families left after the war, but 14 have moved in and another five will join them by summer’s end. In a typical year, Nahal Oz absorbs 10 to 15 new families.

“The interesting thing is that it didn’t go down to zero,” Sergio DellaPergola, a respected Israeli demographer and emeritus professor at Hebrew University, said of the growth rate. “Instead of falling, it didn’t fall. The message is that the security risks, the tunnels underground, aren’t enough that people won’t want to live in that area.”

If moving to the Gaza border doesn’t intuitively make sense, it certainly does make dollars. According to the Or Movement, which encourages settlement in Israel’s North and South, residents of the Gaza Envelope can take home as much as $1,000 more per month thanks to an income tax benefit for residents of the area. Residents in the South get a card that provides discounts at local businesses, as well as cultural and sporting events.

Residents of the Gaza Envelope also get hefty discounts on real estate, an especially appealing prospect given that Israel’s housing prices have risen nearly 60 percent since 2008. They receive a 69 percent discount on property lot values, and some building permits and other fees are waived entirely.

In Nahal Oz, which felt compelled to make up for the families that left, the kibbutz invested upward of $500,000 to recruit new members.

“We had to invest superhuman efforts to get people here,” said Oshrit Sabag, who heads the Nahal Oz recruitment efforts. “We put in a lot of resources, a lot of thought, a lot of money, and we used a lot of outside sources to succeed and repopulate the kibbutz. It wasn’t easy after the summer we had to convince people to come live here.”

Residents say the biggest inhibitor of even more rapid growth is uncertainty about the next outbreak of violence. Cities in Israel’s center and North are protected by the Iron Dome missile defense system, but in Nahal Oz, residents sometimes have only five seconds to find shelter after a warning siren goes off ahead of a missile strike. The Israel Defense Forces, meanwhile, has remained vague on its progress eliminating tunnels used by Hamas to attack Israel, saying only that it’s using a range of means to address the issue.

“No one knows what will be and when it will happen again,” said Inbar Shevach, a social worker employed by the kibbutz. “Anything can make people jump, every boom. Every person deals with it in his own way. Everyone has their own fears for the future.”

DellaPergola said that in addition to an Israeli ethos to settle the land beyond Tel Aviv, Israelis haven’t historically been fazed by security risks. They tend to stay constant in their willingness to move to far-off places, he said, at times if only to prove that war won’t drive the country to abandon an area.

“You think something happens and everything changes,” he said. “The Israeli population’s trends continue for a long time. Very little changes in the foundation of Israeli society, despite the problems and tough times and complicated events. What’s interesting is the stability.”

Residents say the attacks strengthen the their sense of solidarity, giving them something to fight for. That resolve, said Ronnie Levine, chairman of Kibbutz Erez on Gaza’s northern border, attracts Israelis searching for a national purpose.

“I think people in Israel want to do something pioneering, ideological,” Levine said. “Here they have ideology and a wonderful community that’s not really far from the center.”