When it comes to Jewish ties, no GOP candidate trumps Trump 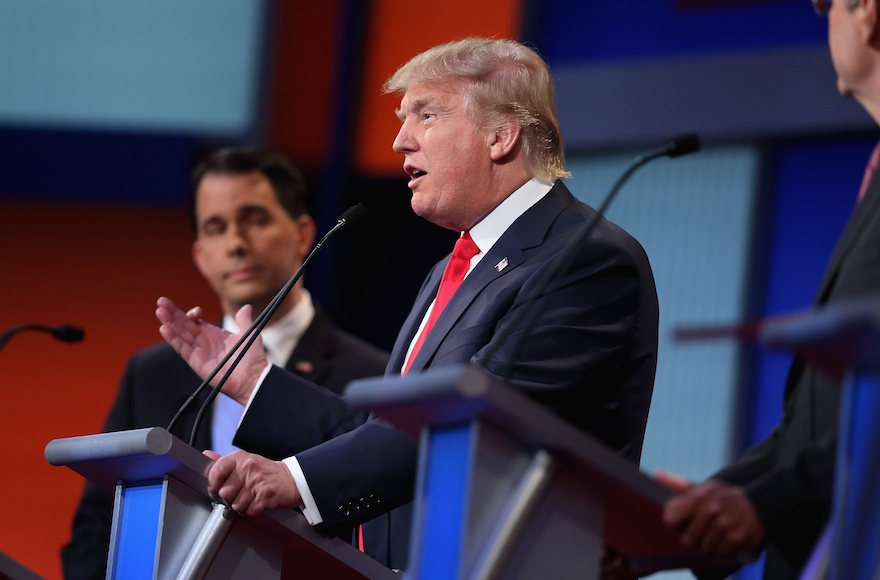 NEW YORK (JTA) — Among the expansive field of 2016 Republican presidential candidates on display in the party’s first debates, Donald Trump may be the most closely connected to the Jewish people.

Trump is from New York, works in professions saturated with Jews and long has been a vocal supporter of Israel. His daughter and two grandchildren are Jewish, the executive vice president of his organization is Jewish — and Trump certainly has chutzpah.

But you won’t find Jewish donors of influence in Trump’s network of associates: The billionaire’s campaign is self-financed, not donor-funded. Forbes estimates Trump’s net worth at about $4 billion; Trump says he’s worth $10 billion.

As the main attraction of the Republican debate on Thursday night, Trump’s trademark chutzpah was on sharp display. Asked about past references to women he dislikes as “fat pigs,” “slobs” and “disgusting animals,” Trump said he has no time for political correctness. He bragged about how Hillary Clinton dared not miss his most recent wedding because he donated to her campaign. And he refused to rule out running as a third-party candidate should someone else win the Republican nomination.

Given his myriad Jewish associations, Trump is not an unfamiliar face in Jewish circles. He has served as a grand marshal at New York’s annual Salute to Israel Parade. After Hurricane Katrina, he was among a group of celebrities who decorated Jewish federation tzedakah boxes to be auctioned off to support hurricane disaster relief. And in February, he was honored with an award at the annual gala for the Algemeiner, a hawkishly pro-Israel Jewish news organization.

“I have a Jewish daughter. This wasn’t in the plan, but I’m very glad it happened,” Trump said at the event in Manhattan. On Israel, he said, “We love Israel. We will fight for Israel 100 percent, 1,000 percent. It will be there forever.”

“You truly have a great prime minister in Benjamin Netanyahu. He’s a winner, he’s highly respected, he’s highly thought of by all,” Trump said in the 30-second spot. “Vote for Benjamin – terrific guy, terrific leader, great for Israel.”

By the same token, Trump has made clear that he believes President Barack Obama is bad for Israel and has questioned how American Jews could support the president.

“I have many Jewish friends that support Obama and I say, ‘Why?’ and they can’t explain why. They support him, they give him money, they give him campaign contributions,” Trump told radio host Michael Savage in February. “This is the worst enemy of Israel.”

Trump at times has dabbled in Israeli real estate. About a decade ago he bought a site in the Tel Aviv metropolitan area with plans to build Israel’s tallest building, to be called Trump Plaza Tower. He later sold the Ramat Gan property to an Israeli firm before its development. In 2012, Trump met with Israel’s tourism minister to discuss possible investments in real estate and tourism, according to the Israeli news website Ynet.

Trump’s closest Jewish association is with his daughter Ivanka’s family. Ivanka Trump, a fashion designer and celebrity in her own right, converted to Judaism before marrying Jared Kushner, the son of New York Jewish real estate mogul Charles Kushner.

She studied for her Orthodox conversion with Rabbi Haskel Lookstein of Manhattan’s Kehilath Jeshurun synagogue and the Ramaz School, and Lookstein officiated at her wedding. Trump and Kushner are members of Lookstein’s Orthodox synagogue and are Shabbat observant. They have two children.

Donald Trump is Presbyterian. He has said he goes to church on Christmas, Easter and special occasions.

When it comes to The Trump Organization, Trump’s right-hand man is a Jewish lawyer, Michael Cohen, who also serves as a top campaign aide. Cohen ignited controversy last week by suggesting that spousal rape doesn’t count as rape. He later apologized, saying his remarks were “inarticulate.”

Trump, of course, doesn’t shy away from controversy himself. Just since announcing his candidacy in June, he has called illegal Mexican immigrants rapists, disparaged Sen. John McCain, R-Ariz., for being captured in the Vietnam War and publicly disclosed the private mobile phone number of Sen. Lindsey Graham, R-S.C., also a presidential candidate, at a campaign rally.

Then there was Thursday’s Republican debate. Following his verbal fireworks on stage, he doubled down on Twitter, saying, “I really enjoyed the debate tonight even though the @FoxNews trio, especially @megynkelly, was not very good or professional!” Apparently he was referring to Kelly’s question about Trump’s comments on women.

Trump’s record suggests he is far from a Republican ideologue. He has given money both to Democratic and Republican candidates, including Republican primary rivals and Clinton, the likely Democratic nominee for president. Trump at varying times has supported liberal policies like abortion rights as well as Tea Party causes like strict immigration restrictions. In the debate, he stood by his past support for single-payer health care, saying that he thought it worked well in Canada and could have worked in the past in the United States.

One thing is certain of Donald Trump: As long as he stays in this campaign, he will continue to use his voice often and loudly.