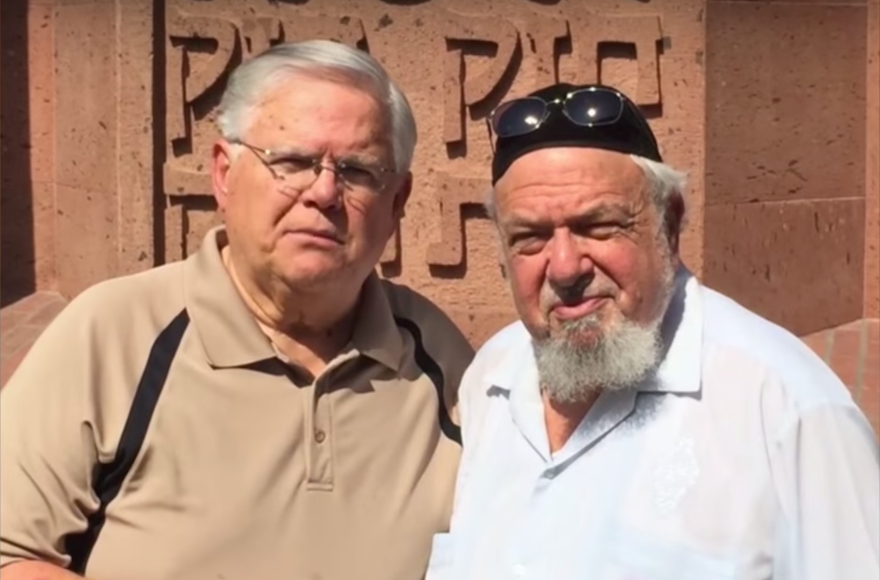 How close are the Jewish and Christian leaders in your city? Chances are they aren’t quite as tight as this pastor-rabbi duo from San Antonio.

On Wednesday morning, some 30 cars and buildings surrounding a San Antonio Orthodox Jewish synagogue were hit with anti-Semitic graffiti. Police found spray-painted swastikas and curse words on various sites near Congregation Rodfei Sholom and a car thats window had been smashed with a rock.

In the immediate wake of the incident, Pastor John Hagee of San Antonio’s Cornerstone Church showed up at the scene in a show of solidarity from the city’s Christian community. Later in the day, Hagee and Rabbi Aryeh Scheinberg of Rodfei Sholom – who have been friends for 34 years, according to Hagee – uploaded a heartwarming video showing solidarity between San Antonio’s Jews and Christians to YouTube that already has over 17,000 views.

“As soon as  I heard that this had happened, [my wife] Diana and I came immediately to express our solidarity with the rabbi, with his congregation and the Jewish community in the city of San Antonio. I want to say to all of the Christians in America: We stand with the Jewish people. An attack against this synagogue is an attack against Christians everywhere,” Hagee said in the video, arm-in-arm with Scheinberg. “And I am saying to the policing agencies of our city and to the citizens of our city: Join together in finding out who the hoodlums were that did this so they can be  brought together and punished to the fullest extent of the law.”

Added Scheinberg, “This incident that occurred today is of course disheartening. However, we are so proud to say that we have the love, support of our community and our Christian community, our neighborhood and the greater Christian community in our city and in our country. Pastor Hagee and his wife Diana came here immediately after they heard of this incident to show their support and to show their love. And that gives us tremendous strength that good will overcome evil, and of course, love will overpower hatred.”