Here’s why Hamas and Israel may be secretly negotiating 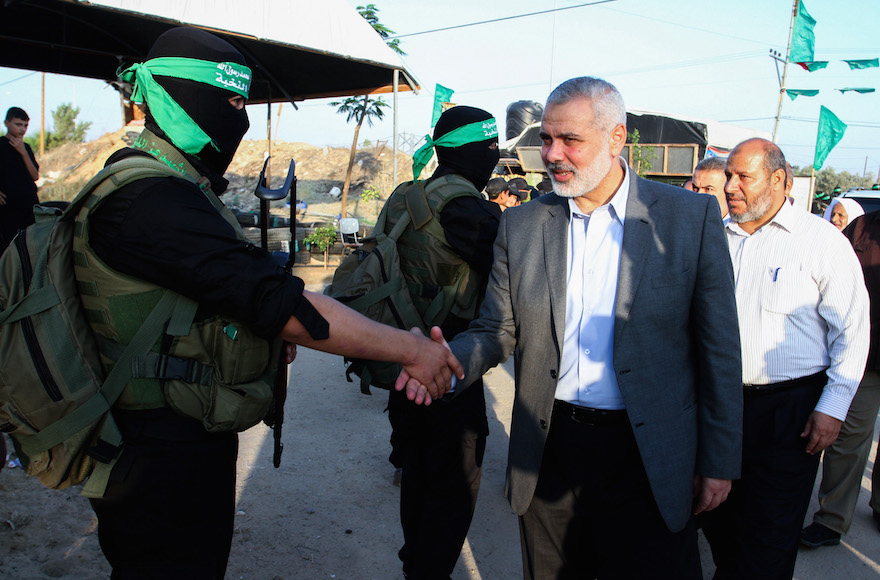 TEL AVIV (JTA) — After more than a decade of failed diplomacy, Israel could be close to signing a major agreement with the Palestinians.

They’re just not the Palestinians you thought.

After years of vowing not to negotiate with Hamas, which rules the Gaza Strip, Israel may be finalizing a deal with the terrorist group that reportedly would lift Israel’s blockade of Gaza in exchange for a cessation of Hamas rocket attacks and tunneling into Israel for at least eight years.

Israeli officials have flatly denied the reports. On Monday, Prime Minister Benjamin Netanyahu’s office released a statement saying that its policy of non-negotiation with Hamas had not changed.

“Israel would like to officially clarify that it is not holding any meetings with Hamas, neither directly, nor via other countries, nor via intermediaries,” the statement said.

But there may be some truth to the reports, which have appeared in the Arabic-language press and have received considerable attention in the Israeli media. A senior official in Turkey, an ally of Hamas, told the Hamas daily al-Resalah that an agreement was near, the Times of Israel reported. The official, Yasin Aktay, is an adviser to Turkish Prime Minister Ahmet Davutoglu and said Hamas political chief Khaled Meshaal came to Turkey to brief the Turkish leadership about the agreement.

After three wars in the past six years, Israel and Hamas may have a mutual interest in securing a longer-term truce that will stave off another round of fighting. Hamas would be able to rebuild Gaza — and perhaps restock its arsenal — while the Israelis would get a reprieve from Hamas rockets that is longer than two years.

“It seems to me that Hamas absorbed some [Israeli military] operations, and they’re interested in getting to an arrangement that will allow them to live in Gaza in quiet,” said Ephraim Inbar, the director of Bar-Ilan University’s Begin-Sadat Center for Strategic Studies. “Israel is also interested in a long-term cease-fire.”

Arabic news sources reported that the agreement could include the construction of a port in the Gaza Strip. Ships en route to Gaza would pass through a port in Cyprus, where they would be examined by either Turkish or NATO authorities. The agreement also would include permits for thousands of Gazan day laborers to work in Israel, and in exchange Hamas would commit to ceasing all rocket attacks and tunneling into Israel, according to the Times of Israel.

The deal reportedly has been approved by the Shura Council, Hamas’ legislative body. Former British Prime Minister Tony Blair is said to be mediating between the sides.

Gershon Baskin, who helped negotiate the 2011 Israel-Hamas prisoner exchange that freed Israeli soldier Gilad Shalit, said he was inclined to believe Netanyahu’s denials and doubted that an agreement was close. Israel has no incentive to sign an agreement that would strengthen Hamas while weakening Palestinian moderates in the West Bank who oppose Hamas, Baskin said.

“It’s insane for Israel to even think about entering into that kind of agreement,” Baskin said. “It’s a victory for Hamas, and the question is: You’re giving Hamas a victory as Hamas continues to build its soldiers and its army. For what? It’s not a plan to demilitarize Gaza.”

If negotiations are taking place, it would be a major reversal for a government that previously considered Israel-Hamas talks anathema — at least officially. Last year, Israel called off peace talks with the Fatah-controlled Palestinian Authority when the Fatah faction and Hamas signed a unity pact.

“Instead of choosing peace, Abu Mazen formed an alliance with a murderous terrorist organization that calls for the destruction of Israel,” Netanyahu said at the time, using P.A. President Mahmoud Abbas’ nom de guerre. “Whoever chooses the terrorism of Hamas does not want peace.”

Israel, however, has negotiated with Hamas indirectly in the past. Mediated talks in 2012 and 2014 ended Israeli military operations in Gaza. At the end of August 2014, an Egyptian-mediated pact ended a Gaza conflict that saw more than 2,000 Palestinians and 70 Israelis killed. The cease-fire also called for restarting indirect talks on easing the blockade of Gaza and disarming the territory.

An Israel-Hamas agreement may be especially opportune now as Israel aims to strengthen ties with neighboring countries that share its fears about the Iran nuclear agreement. Saudi Arabia reportedly wants to create a broad, Sunni-based alliance that includes Hamas to counter Iran’s regional ambitions. Hamas, however, has received funding and weaponry from Iran.

For Israel, another positive side effect of an accord could be improved relations with Turkey, which supports Hamas. Relations between Turkey and Israel deteriorated in 2010 after nine Turks were killed when Israeli soldiers stormed a Turkish boat, the Mavi Marmara, trying to break Israel’s naval blockade of Gaza.

Since then, Turkey and Israel have negotiated over Israeli compensation for the victims. An Israeli pact with Hamas could make Turkey more amenable to an agreement of its own with Israel. But on Monday, a statement from the Israeli Prime Minister’s Office said, “As for relations with Turkey, agreement is still far off.”

Even if an Israel-Hamas accord does strengthen Israel’s regional position, it could harm Israel’s relationship with the Palestinian Authority, signaling to moderate Palestinians that violence pays, Baskin said.