Obama to U.S. Jews: ‘We’re not giving away anything’ to Iran 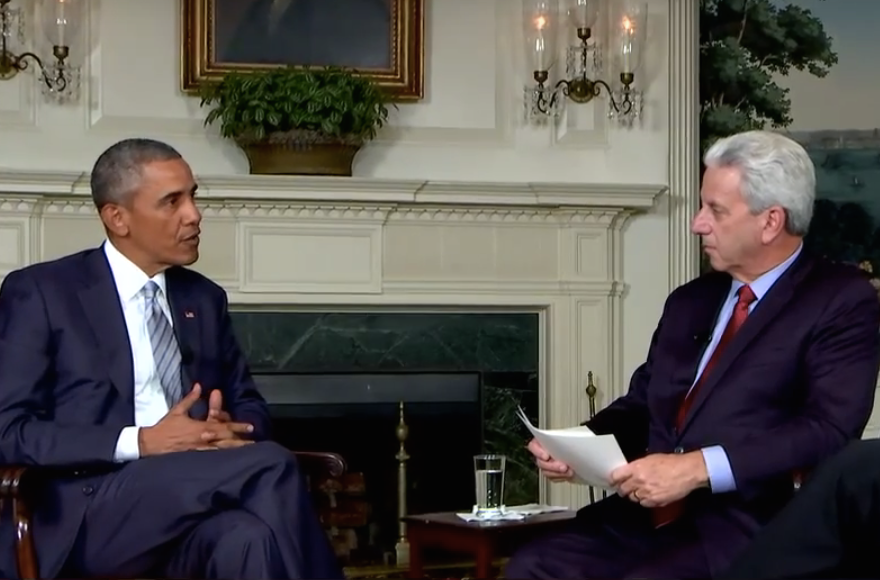 President Barak Obama speaking with Michael Siegal, chair of the Board of Trustees of the Jewish Federations of North America, at the White House, on Aug. 28 2015. (Screenshot: YouTube)
Advertisement

In an address to American Jews on Friday, President Barack Obama insisted that the agreement negotiated between world powers and Iran blocks the Islamic Republic from developing nuclear weapons without limiting the United State’s options in case of violations.

“This deal blocks every way, every pathway Iran might take to obtain a nuclear weapon,” said Obama during the 50-minute webcast, filmed live from the White House. “We’re not giving away anything in this deal in terms of our capacity to respond if they chose to cheat.”

The event was co-sponsored by the Jewish Federations of North America and the Conference of Presidents of Major American Jewish Organizations. Obama made a few remarks before responding to questions, many submitted by American Jews to the organizers in advance.

The agreement reached on July 14 between Iran and six world powers, including the United States, requires Iran to remove all but a “handful” of centrifuges from the Natanz nuclear facility, downgrade the heavy water plant at Arak and convert the Fordow plant into a research facility, Obama said.

“In the best of all worlds, Iran would have no nuclear infrastructure whatsoever,” he said. “Unfortunately that’s not a reality that’s obtainable.”

The president reiterated that the U.S. has ensured it can “snap back” the sanctions on Iran that he credited with bringing the Islamic Republic to the negotiating table, “in the event that Iran cheats or does not abide by the terms of the deal.”

Obama said that without the nuclear deal, the U.S. would be forced to take military action. He conceded that Iran could feel “cocky enough” to develop nuclear weapons when parts of the agreement expire in 15 years, but said Iran “could pursue it next week if we didn’t have this deal.”

He stressed that the U.S. has not taken any options off the table to prevent Iran from obtaining a nuclear weapon, but that a “military approach at this juncture would forestall a determined Iran for a year or two from getting a nuclear weapon.”

The president defended his record on Israel’s security, saying that even his “fiercest critics” would acknowledge his time in office has seen “unprecedented military cooperation” with Israel and enhanced military aid to the country, including for the Iron Dome missile defense system.

Though Obama rejected the “heated” rhetoric surrounding the deal, he challenged the idea that the vitriol has been equal on both sides, laying most of the blame on his detractors.

He denied calling opponents of the deal “warmongers” and defended Rep. Jerrold Nadler, D-N.Y., who recently came out in support. Nadler, he said, “for personal and political integrity stood by Israel and has been attacked in ways that are appalling.

“I would suggest that in terms of the tone of this debate everybody keep in mind that we’re all pro-Israel,” the president said. “We have to make sure that we don’t impugn people’s motives.”

In a personal moment, Obama said that if he lived in Israel he would have a “visceral reaction” to dealing with a country that denies the Holocaust.

“As an African-American, I understand history teaches us that man can be very cruel to man and you have to take threats seriously, but what history also teaches us is that sometimes the best security is to enter into negotiations with your enemies,” he said, referencing negotiations between the U.S. and the Soviet Union during the Cold War.

“The bond between the United States and Israel is not political. It’s not based on alliances of convenience, it is something that grows out of family ties and bonds that stretch back generations and shared values and shared commitments and shared beliefs in democracy,” said Obama. While the two governments may disagree, as families do, he said it “does not affect the core commitments we have to each other.”

The president predicted a quick improvement in ties between the U.S. and Israel after the deal is implemented. He promised to make sure Israel keeps its military edge in a dangerous neighborhood, where Iranians prop up Hezbollah and other terrorist proxies.

Obama was adamant, though, that military aid and sharing of intelligence was not to compensate Israel for the deal, as critics have suggested. He said Israel and the U.S. have been in discussion “for months” over enhanced sharing of military knowledge.

Congress has until late September to decide whether to reject the deal. Obama has pledged to veto a rejection.

On Thursday, Sen. Tom Carper, D-Del., came out in support of the agreement, bringing the total number of Democratic supporters in the Senate to 30. Obama needs 34 senators to uphold a presidential veto. Only two Democratic senators have come out against the deal: Chuck Schumer of New York and Bob Menendez of New Jersey.