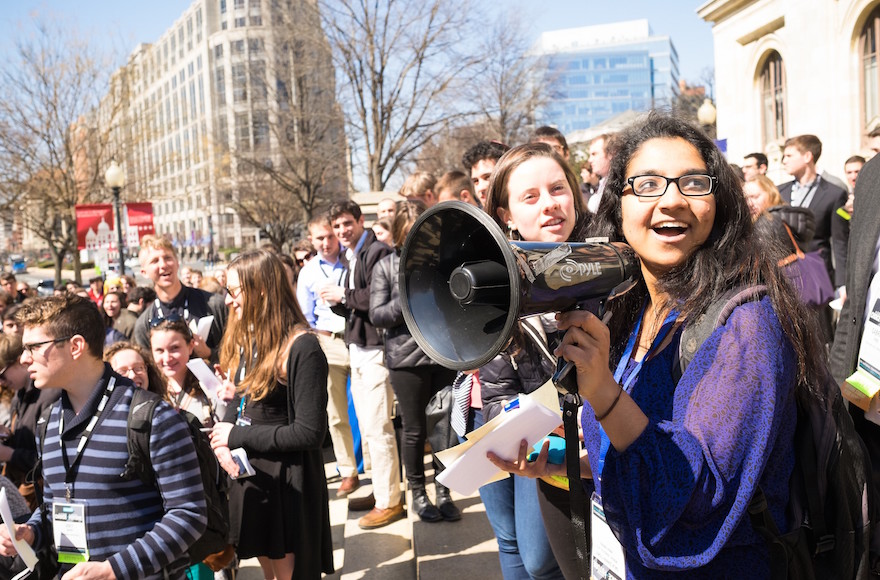 That’s how she described herself in a keynote speech this spring at J Street’s national convention in Washington, D.C., when she was a board member.

She received supportive comments on social media as well, along with plenty of attacks from the other side of the Israeli-Palestinian divide.

Farooqi said she has no plans to convert to Judaism, though she does consider herself “culturally Jewish,” having grown up in Maryland’s heavily Jewish Montgomery County.

She said she has too much work to do to worry about her critics. As J Street U president, she explained, it’s her job to guide the group, strategize with her regional vice presidents and implement J Street’s goals on campus.

Looking ahead, Farooqi said J Street U will continue to lobby American Jewish organizations to be more transparent about where their funding goes – especially if it’s crossing Israel’s pre-1967 borders – and to continue to press the larger Jewish community to “address the occupation.”

“We think that a lot of things that the American Jewish community is worried about traces back to the occupation and they don’t put that together in their minds,” she said.

Farooqi reiterated that J Street U is opposed to the boycott, divestment and sanctions movement against Israel and does not co-sponsor Apartheid Week and similar events sponsored by Students for Justice in Palestine. She said she attended a meeting of the Palestinian rights group her freshman year and was “very turned off by the one-sided rhetoric.”

But that doesn’t mean she shies away from criticizing Israel. Her tweets about the occupation and less-than-flattering commentary on Israeli Prime Minister Benjamin Netanyahu have raised eyebrows and been cited by some as proof that J Street U is not “pro-Israel.”

Eric Rozenman, the Washington director of the Committee for Accuracy in Middle East Reporting in America, which challenges perceived anti-Israel bias in the media and is active on campuses, said that the hype regarding Farooqi’s election has been overblown – especially, he said, because she is not the first Muslim-American college student to be vocally pro-Israel.

What would be more remarkable, Rozenman said, is if a Jewish Zionist student were elected to head a Muslim student association. That’s never going to happen, he said, because so much of the “other side” isn’t about criticism of Israel, it’s about “delegitimization of Israel” as a Jewish state.

Sitting in a coffee shop not far from her parents’ home in this tony Washington suburb, Farooqi readily shared that her path to Zionism started as far more sympathetic to the Palestinian cause.

“My first, first Israel memory is a We Support Israel sign outside of [Congregation] Har Shalom and these other places, and knowing that I didn’t agree with that because I was reading about settlement expansion, Operation Cast Lead,” said Farooqi, referring to Israel’s 2006 war in Gaza.

“I knew that my parents were never anti-Israel because they were always sensitive that there are people in Israel who want peace, but they were critical of its policies, so I grew up knowing Israel as a place I did not have warm feelings toward. And I still came to love it.”

Farooqi recalled that her journey to Zionism began with a fight. As editor of her high school newspaper, she said she wanted to write an Op-Ed in support of the Palestinian Authority’s bid for statehood at the United Nations. When a close Jewish friend heard this, she said, it led to an unexpected shouting match.

“Clearly this is something that means a lot to me because I’m crying. It means a lot to her because she’s screaming,” she said. “That led me into learning more about the conflict.”

And eventually it led her to J Street. 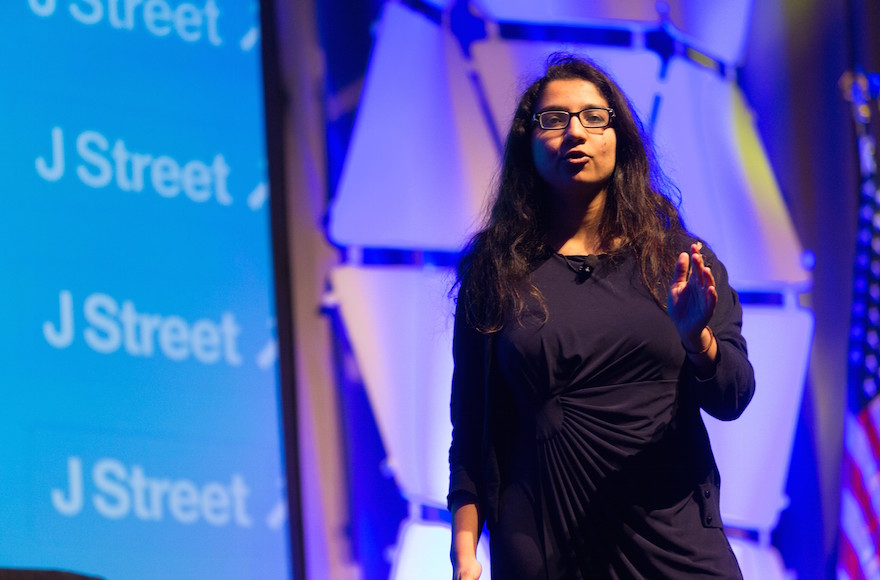 A frequent volunteer at the Misler Center, an adult day center in Rockville where her grandparents received Jewish Council for the Aging services, Farooqi said she overheard another volunteer criticizing J Street.

“I went on their website and it was pro-Israel, pro-Palestinian, two states, and I was like, this lines up with everything I believe in,” she said.

As a freshman at the University of Maryland, College Park, she began taking Israel studies classes at the Hillel. The staff and director Rabbi Ari Israel have always made her feel welcome.

Israel recalled Farooqi getting in touch with him her freshman year.

“I knew then and still know now that she is a unique individual,” the rabbi said. “She genuinely participates in Hillel activities and is warmly embraced by our diverse student population.”

Farooqi traced her full Zionist conversion to the spring of her freshman year, when she was picked to take on the role of Israel’s first prime minister, David Ben-Gurion, in a seminar.

“I got into fights with my [Zeev] Jabotinsky all the time,” Farooqi recalled, laughing.

In researching her role, she said she stumbled on “David Ben-Gurion: In His Own Words” in the stacks of the university library. She recalled poring over the short book, a compilation of Ben-Gurion’s thoughts on Zionism, Judaism and philosophy, late into the night. Ben-Gurion’s message of communal responsibility resonated with her, she said.

“Zionism stopped being certain political consequences,” Farooqi said. “It started being this entire ideology of taking responsibility for one’s people, and that’s something that really spoke to me.”

The professor of that seminar was Israel studies scholar Paul Scham. Having taught Farooqi in two classes her freshman year, he’s not surprised by where she ended up.

“Amna is surprising in the abstract,” Scham said. There are “a lot of students who aren’t Jewish who sympathize with Israel but feel that the Palestinians need a fair shake as well. Certainly it’s unusual, but knowing her, it isn’t.”

He added, “I think it shows a mature choice for J Street that puts non-Jews who strive for peace into leadership roles, even if they’re not Jewish.”

Farooqi ended up spending the spring semester of her sophomore year at the Hebrew University of Jerusalem.

“I was meeting Israelis and Palestinians. I went into the West Bank a lot. I made Israeli friends. I wanted to actually understand,” she said.

Inspired by her time in Israel and disheartened by the breakdown of Secretary of State John Kerry’s Israeli-Palestinian peace talks, Farooqi said, she threw herself into working for J Street U — first as a representative to the student board and then as a J Street U intern last summer in Jerusalem, helping to lead student tours.

“I’m very, very scared that we’re getting to a point where it’s going to be impossible to be pro-Israel because pro-Israel will become synonymous with oppression. And I want to do the work that keeps that from happening,” she said.

Back in Maryland, Farooqi has taken a step back from three years of student government to focus on J Street U and assistant-teaching for Israel studies professor Yoram Peri.

She plans to return to Israel when she graduates this spring with a degree in government and politics and a minor in Israel studies.

She’d love to go to graduate school at Hebrew University.