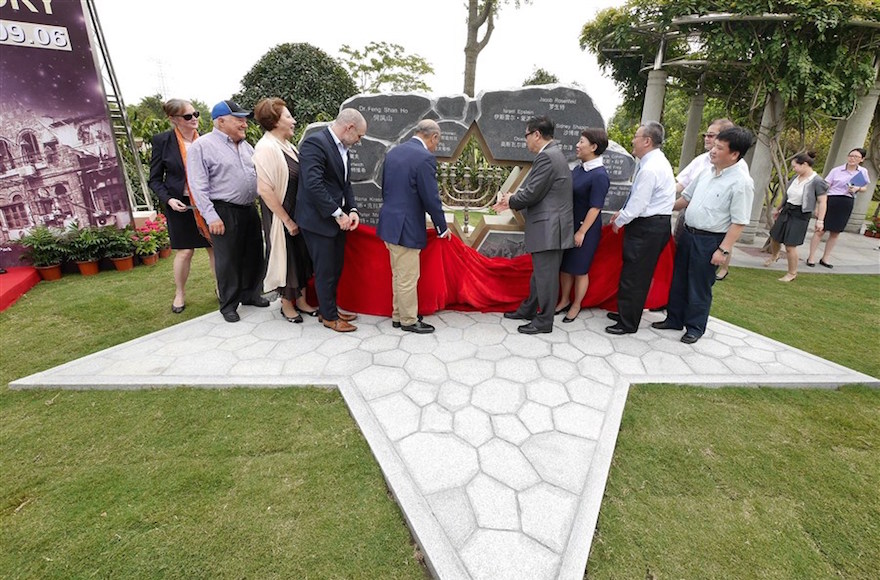 Beginning in 1938, as Jewish persecution by the Nazis went into high gear, approximately 20,000 Jewish refugees fled to Shanghai, one of the few safe havens in the world that did not require a visa.

On Sunday, a Jewish Memorial Park was opened at the Fushouyuan cemetery in that city’s Qingpu district in their honor.

Israeli Consul-General Arnon Perlman, speaking at the dedication, said it is very important “to remember the friendship between China and Israel and between Shanghai and Israel.” On a patch of newly laid grass, a Star of David made of stone forms the centerpiece of the park and serves as the base of a sculpture of interlocking stones with another Star of David, and a menorah, at its center.

One of the stones pays tribute to Dr. Ho Feng-Shan, the Chinese consul general of Vienna during the war, who defied orders and issued over 3,000 visas to Austrian Jews to allow them to travel to China (while visas were not required to enter Shanghai, they were required to leave Austria).

The mostly German and Austrian Jews who came to Shanghai in the late ‘30s and early ‘40s joined another several thousand Jewish residents who had made the country their home in the previous 50 years, either as merchants or to escape Russian pogroms.

Life in Shanghai was marked by its own political tensions and hardships, but Chinese residents welcomed the Jewish refugees.

“If we were thirsty, [the Chinese] gave us water,” recalled Jerry Moses, who arrived in the city as a child with his family, one of the lucky few to escape Germany. “If we were hungry, they gave us rice cakes. As bad as we had it, they had it worse. And they felt bad for us.” 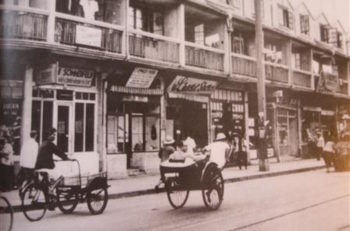 People moving along a street in the Shanghai Jewish Ghetto circa 1943. (Wikimedia Commons)

Following the Battle of Shanghai in 1937, the Japanese occupied the city. In 1941, under pressure from their German allies, they consolidated Jewish refugees into what became known as the Shanghai Ghetto in the Hongkou district.

Since the end of the World War II, and with the establishment of the People’s Republic of China in 1949, the Jewish population declined significantly as many relocated to North America, Israel and Australia.

But there have been several recent efforts to bring awareness to the city’s Jewish history. In 2007, the Shanghai Jewish Refugees Museum opened on the site of the former Ohel Moshe Synagogue, which had recently been restored.

Earlier this year, the museum applied to have the neighborhood that housed Jewish refugees during the war designated as a UNESCO heritage site. And last month, the White Horse Cafe, which originally opened in 1939 and was a popular gathering spot for Jewish refugees, reopened across the street from the refugee museum and was designed using the cafe’s original blueprints.

Ron Klinger, the grandson of the cafe’s founder, who immigrated to Australia following the war, attended the opening. “My parents often told me that while in Shanghai, they never encountered any hostility, any anti-Semitism or any unfriendliness from the Chinese people,” he said.