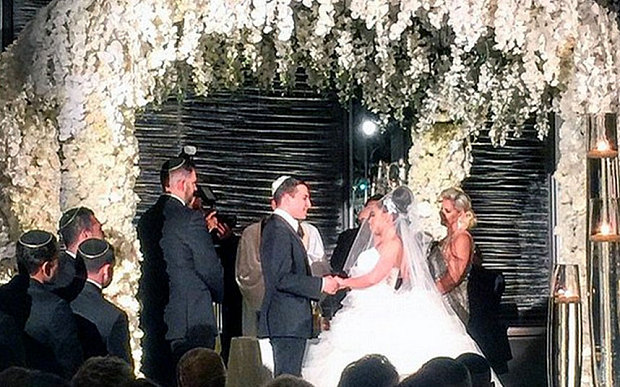 Anna Goldshmidt and Elan Stratiyevsky getting married in a traditional Jewish ceremony at the Waldorf Astoria in New York, June 13, 2015 (@gflorence/Instagram)
Advertisement

It’s a story that highlights two unique, and frequently maligned, aspects of American culture: easy access to guns and a zeal for lawsuits.

And at its center is a Jewish wedding.

Anna Goldshmidt and Elan Stratiyevsky are suing Stratiyevsky’s cousin Vladimir Gotlibovsky for ruining their June wedding at the Waldorf Astoria by accidentally firing his pistol at the swanky pre-ceremony cocktail reception and grazing the head of a guest.

Not to be outdone, Gotlibovsky, 42, is himself suing the upscale Manhattan hotel for canceling (unnecessarily, he says) the post-ceremony reception.

In canceling the reception, the hotel said it feared for the safety of the guests. 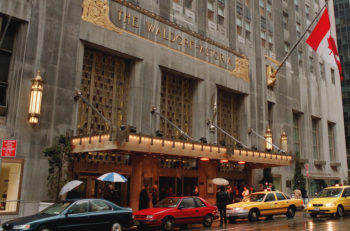 The exterior of the Waldorf-Astoria Hotel in New York is shown, March 14, 1999. (Stephen Chernin, AP Images)

According to the U.K. Telegraph, Gotlibovsky, who owns a Bronx liquor store, argues that the Waldorf should pay at least half of whatever the court says he must pay the couple.

“He was not responsible for the cancellation of the wedding reception,” his attorney, Christopher Chang, said, adding, “The fact of the matter is after the firearm discharged, the hotel was secure and the reception could have gone forward.”

Gotlibovsky, 42, legally carried the gun and has not been charged with any crime.

The bullet tore a hole in Gotlibovsky’s pants and ricocheted off the marble floor. After the gun was fired, Gotlibovsky gave it to his brother, who took it out of the hotel.

Gotlibovsky also mistakenly fired his gun in December 2014, when he accidentally shot himself in the foot, according to The Telegraph.

“Her dream wedding was cancelled and can never be recaptured,” the lawsuit against Gotlibovsky said. “There will never be a wedding album; what was to be the happiest day of her life turned into a disaster.”