On Yom Kippur, must we ask forgiveness for communal wrongs?

A house in the West Bank village of Duma, near Nablus, where three members of a Palestinian family, including an infant, were killed, July 31, 2015. (Flash90)
Advertisement

LOS ANGELES (JTA) — On Yom Kippur, as we focus on our personal faults, how do we acknowledge those shortcomings that are more communal?

In synagogue, reciting line by line the Al Chet prayer, seeking atonement for the areas of our lives where in the past year we have fallen short, events in the news, even those that may have touched our lives, seem far away and better off resolved by the talking heads of the cable news.

Beating our chest for each “chet,” we ask God in page after painful page to forgive us for “rashly judging others,” “scorning parents and teachers,” even engaging in “idle chatter” and “forbidden trysts.” Isn’t that enough?

Yet in an “Alternative Confessional” found in the Mahzor Lev Shalem, the High Holidays prayer book published by the Rabbinical Assembly of the Conservative movement, we find the additional shortcomings of “refusing to hear,” “hesitating,” “complacency” and “not using our power,” which suggest we look outside the usual range of things for which we are accustomed to taking responsibility.

Reading this new litany last year, I couldn’t help but think, “Do I have to own up to this stuff, too?”

Seeking advice on how to approach the added failings, I had lunch with Rabbi Jonathan Klein, executive director of CLUE-LA (Clergy and Laity United for Economic Justice), a Los Angeles-based organization that is “committed to worker justice,” according to Klein.

Before our lunch orders even arrived, I realized that chet-wise, I was not going to get off easy. Referring to the language in the High Holidays confessional prayers, Klein pointed out that “the prayers are in the plural, not just to prevent embarrassment of the individual,” but “because there is an understanding of collective responsibility.”

“If we don’t contemplate our culpability for communal wrongs at Rosh Hashanah and Yom Kippur, when are we supposed to do it?” asked Klein, a former rabbinic director at the University of Southern California Hillel who was ordained from the Reform movement’s Hebrew Union College-Jewish Institute of Religion in 1997.

It was a question for which I had no answer.

“Some are guilty, all are responsible,” he added, looking at me from across the table, quoting Abraham Joshua Heschel. 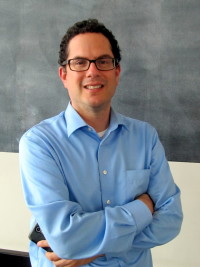 Rabbi Jonathan Klein notes that the confessional prayers at Yom Kippur are in the plural “because there is an understanding of collective responsibility.” (Edmon J. Rodman)

Waiting for our orders, we talked over events in the news. The rabbi noted the stabbing of six marchers at the Jerusalem gay pride parade by a repeat offender, a haredi Orthodox man — a 16-year-old girl died from her injuries. There was also the firebombing of a Palestinian home in the West Bank that killed a father and his 18-month-old son, and seriously injured two other family members. The attack allegedly was perpetrated by Jewish extremists.

“We should be pondering as individuals, as part of a larger collective, how such evils can pervade our society,” said Klein, who noticed that the smoothie I had ordered suddenly was not going down so easily.

“All the chets are very real and easily done,” said the rabbi, who wanted me to understand that “chet” means “missing the mark” and not “sin,” per se. Since in the confession “they are alphabetical,” they represent “encyclopedic options for making mistakes,” he added. “There is also a recognition that there are other dimensions to a chet.”

One of those chets was the way we do business. In Los Angeles, where the county Board of Supervisors recently voted to raise the minimum wage from $9 to $15 by 2020, as well in other areas of the country, the issue of a “living wage” had earned its share of headlines, forcing us to look at the ways we literally have fallen short.

“The people who work in our stores, who we may employ, were made in God’s image, too,” said Klein, whose organization has made raising the minimum wage a key goal.

Though Klein said he was proud of the “Jewish community’s commitment to the public sphere.” But, he added, “people forget just how hard it is to be on the other end.”

Klein reminded me that the haftarah from Isaiah chanted Yom Kippur morning “teaches you to think beyond the individual.” Since I had brought along a mahzor, we looked over the lines describing the fast desired by God that directs Jews to “let the oppressed go free” and “to share your bread with the hungry.”

“The whole point of the holidays is to re-center ourselves around our commitment to the highest ideals of Judaism,” he said, leading me to ask, “How do I begin?”

On Yom Kippur, he began, “We say the Al Chet over and over. Maybe one reading should be through the lens of your individual faults.” For the second, he suggested, “make it through the lens of communal thoughts.” The third time would be “as fellow human travelers on this planet,” said Klein, noting the universality of a holiday period that begins with celebrating the birthday of the world.

The bill came and we agreed to split it, with Klein insisting to cover the tip. Rising from the table, and still digesting our conversation, I noticed that he was a good tipper.