In off year for Israel, Morocco is etrog hot spot this Sukkot 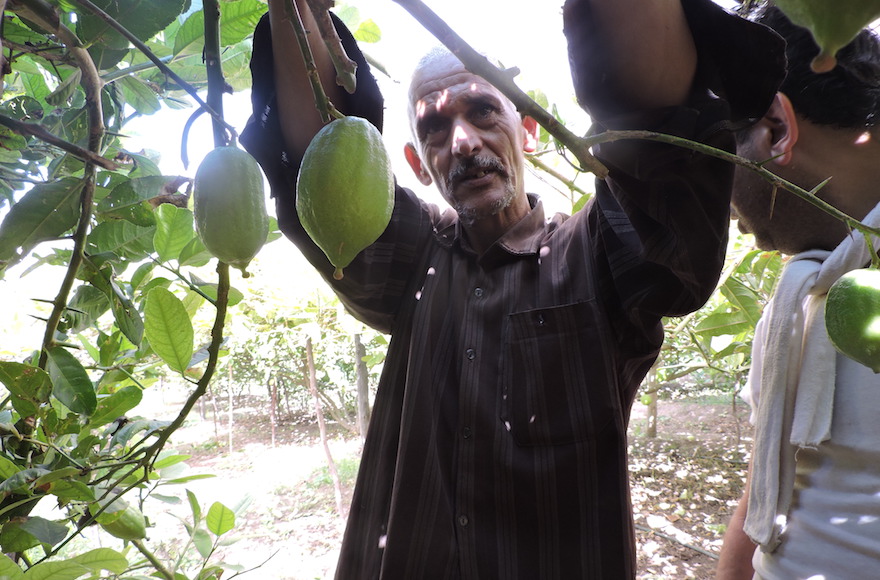 ASSADS, Morocco (JTA) — Why the Jews want etrogs, Mohammed Douch does not entirely understand. What he does know is that they are his main customers.

Each August and September, Jewish merchants come from around the world to his remote grove in the highlands of Morocco — an hourlong hike through mountains, over rocks and along cliffsides.

Most of the year, Douch, 67, a retired restaurant worker, lives in the northern coastal metropolis of Casablanca. But every summer he moves into a structure with dirt walls and a roof made of branches outside this village in the Atlas Mountains to grow etrogs.

Douch and his grove are part of southern Morocco’s small and unlikely etrog industry, which has popped up here each summer for centuries. Almost no Jews live in Morocco, but a few dozen Jewish merchants support the industry, sending etrogs — called citrons in English — to Jewish communities on three continents for Sukkot. On the fall harvest holiday, Jews are commanded to pray with a fragrant, colorful collection of four plants, including the etrog.

And even though Morocco does not have formal relations with Israel, the etrogs make it there, too. Because 5775 was a “shmita,” or sabbatical year, when Jewish law prohibits agricultural activity in Israel, demand for etrogs grown in Morocco is especially high this season.

“The etrogs from the mountains have a special shape, and they have a beauty we don’t find in other places,” said Naftali Levy, a French etrog merchant. “The color and form, the protrusions are very nice.”

Crouched on a narrow dirt path last week, Douch surveyed his small etrog grove through intense eyes lined with deep wrinkles. The trees’ branches grew only a few feet high, sloping down an uneven embankment in tangles of large, oblong leaves. The bright green etrogs hung just inches from the rocky soil. Beyond the grove were sandy brown mountains covered in palm trees. 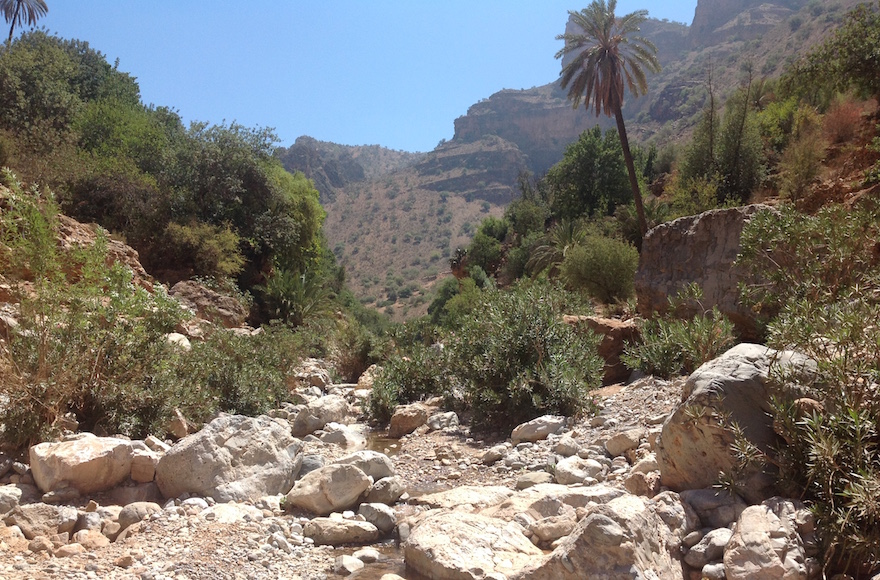 Merchants walk a dirt path between the coastal city of Agadir, Morocco, and the highland etrog groves in Assads, Sept. 8, 2015. (Ben Sales)

“We are attached to our town, and it’s obligatory to visit our original town,” Douch said. “We cannot leave our town because it’s a part of our body. The process I use for this plant is a heritage from my grandfathers.”

Jews were the first Moroccans to plants etrogs — near Marrakesh as far back as 2,000 years ago — said Hebrew University agriculture professor Eliezer Goldschmidt. Their Berber neighbors adopted the crop and continued to grow a small number of etrogs after the Jews left for Israel starting in 1948. Jews have bought the yellow fruits from Berbers for Sukkot ever since.

There are no statistics on the etrog industry in Morocco, but up to hundreds of thousands of etrogs leave the country each year. Merchants said most of the fruits go to Europe, the United States and Canada. Israel began importing etrogs from Morocco in 2013 with a first shipment of 1,500.

“Morocco has a very similar climate to Israel, and the etrog tree is a very sensitive tree,” said Chaim Pauli, co-owner of Elli-Chai’s Judaic Treasures in Silver Spring, Maryland, a store that ordered 1,200 Moroccan etrogs this year to avoid complications from shmita. “Therefore, Morocco was a good solution.”

Jewish merchants stay in the coastal city of Agadir, about an hour’s drive from the etrog orchards, for two or three weeks ahead of Rosh Hashanah. Upon arriving, each merchant treks to his regular etrog grower’s orchard or sends a representative to inspect the fruit.

For Jews, a good etrog is aromatic and yellow when it is used. But Douch doesn’t know that. The etrogs he delivers are several weeks away from being that ripe, and are instead green and odorless. The yellow ones he feeds to animals.

Yitzchak Levy, a merchant with 30 years’ experience (and Naftali Levy’s father), said he looks for an etrog to be tall, with vertical protrusions and unscratched skin. If a grower’s etrogs are worthy, merchants may negotiate to buy an entire small orchard. Yitzchak Levy said he buys approximately 1,000 etrogs a year, paying about $7 to $10 for each one and selling the best specimens for hundreds of dollars.

“The special shape of Morocco’s [etrog] is like a tower,” said Yitzchak Levy, who added that when he finds an especially shapely etrog, “I’m very happy and I thank God. I’d even sing Hallelujah.”

When the etrogs come from mountain growers like Douch, young local men transport them back along the trail to Agadir in baskets that can weigh more than 100 pounds. Each etrog is wrapped tightly to prevent the pitom, or tip, from snapping off.

When an etrog tumbled out of a basket at Douch’s grove, he and his workers gasped. It was, thankfully, unharmed. 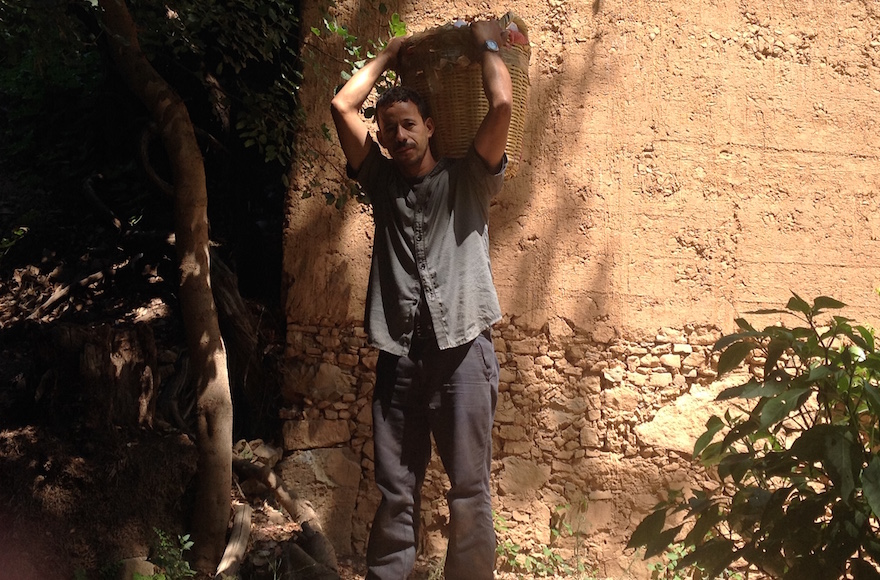 A Moroccan worker carrying etrogs in a grove in Assads, Sept. 8, 2015.

While in Agadir, the merchants — many of them religious — live together in uneasy harmony. Occasionally, said Agadir resident Hervey Levy (unrelated to the Levy father and son), arguments break out over a price or a broken agreement. But on the other hand, with no kosher restaurants nearby, Yitzchak Levy said merchants exchange food for Shabbat.

Merchants said they experience little to no anti-Semitism in and around Agadir, a touristy beach city where people mix in western and Islamic dress, secular music plays in cafes and residents have a reputation for tolerance. Hervey Levy called the city “the Eilat of Morocco,” alluding to the southern Israeli resort getaway.

Douch was visibly taken aback by the suggestion that he’d have a problem selling to Jews — or even to Israel.

“We are not interested in political problems between Palestinians and Israelis,” explained Abdellatif Elmajdi, who translated for Douch. “We are Berber people. We have good relations with Jewish people because they originated from this place, and they are coming to visit us.”

In recent years, said Mohamed El-Otmani, a professor of horticulture at Morocco’s Institut Agronomique et Vétérinaire Hassan II, a water shortage has made growing etrogs in the mountains more difficult, forcing some growers to move to flatland orchards. A handful of Jews recently re-entered the industry.

One such grower, Michael Benchabat, spends most of the year as a food distributor in France. From May to September he lives on his orchard outside Agadir, where he said he produces 100,000 etrogs a year.

Unlike Douch, who only grows the fruits, Benchabat runs a full-service operation. He grows his etrogs in neat, structured rows. One day in early September, three workers on his farm picked etrogs and placed them one by one in cushioned crates. A boy on a nearby porch, meanwhile, took the fruits and put each in a small cardboard box, ensconced in foam. Benchabat then sends the boxes to buyers in the United States and Europe. 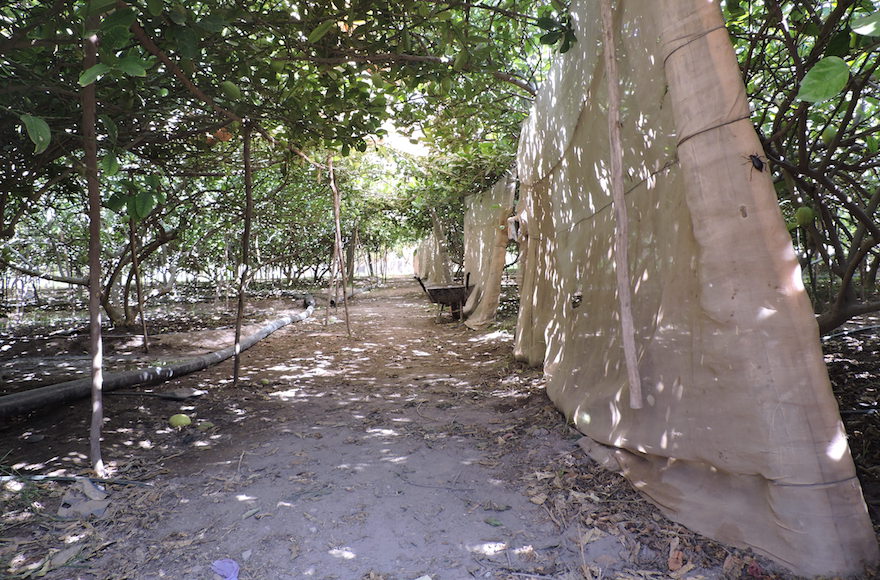 He doesn’t quite feel at home in Morocco, he said. But the sometimes uncomfortable environment is a small price to pay for the feeling Benchabat gets when he picks his first etrog.

“My heart is happy when I’m doing the work of the four species,” he said, using the traditional term for the Sukkot ritual plants. “It’s a special etrog. It’s clean. It’s like a baby.”