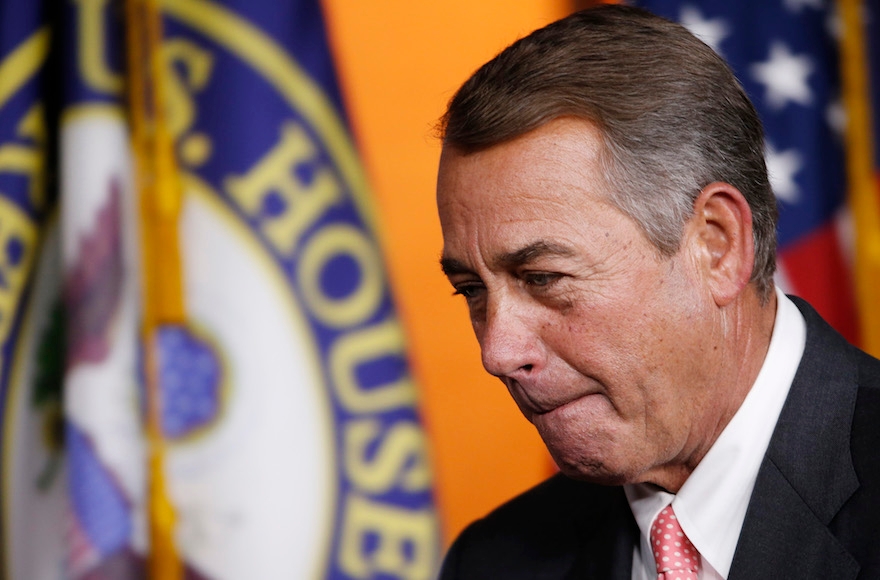 John Boehner, the Republican from Ohio who is the speaker of the U.S. House of Representatives, is quitting politics.

According to reports, Boehner is sick of navigating two irreconcilable forces: the Obama White House and conservatives in his caucus.

Now that he’s going, maybe Boehner will feel free elaborate on his role in the secret that launched the ongoing U.S.-Israel crisis — and perhaps permanently changed the relationship between the two countries.

The question is: Was it a reluctant, barely discernible nod? Or an enthusiastic “Yes!”

Boehner and Dermer have confirmed that the ambassador, who had consulted with Netanyahu, agreed to keep the secret, from the Obama administration, congressional Democrats and pro-Israel groups, including AIPAC. Boehner has said he asked for secrecy to keep Obama from nixing the speech.

However Dermer said it, his “yes” made history.

Netanyahu’s March 3 speech was ultimately pretty good, most Democrats told JTA, precisely because it was sharply critical of the emerging Iran nuclear deal and of Obama’s Iran policies.

But once you keep the secrets of one party in a two-party democracy, you become partisan.

Dermer’s “yes” meant Nancy Pelosi, the minority leader in the House, had to enter the trenches in the effort to push back Boehner’s effort to kill the deal — which was ultimately successful.

Going forward, his “yes” means Democrats on Capitol Hill are no longer so eager to return calls from the Israeli embassy.

It means there’s discussion on the Hill about whether the “Israel is GOP territory” tag will die when Netanyahu leaves office, or outlast him.

Given the echoes of Dermer’s “yes” in Washington’s halls of power, many would like to hear what it sounded like. And Boehner is one of the few people who knows.