For Jewish boxer ‘The White Tiger,’ toughness is a birthright 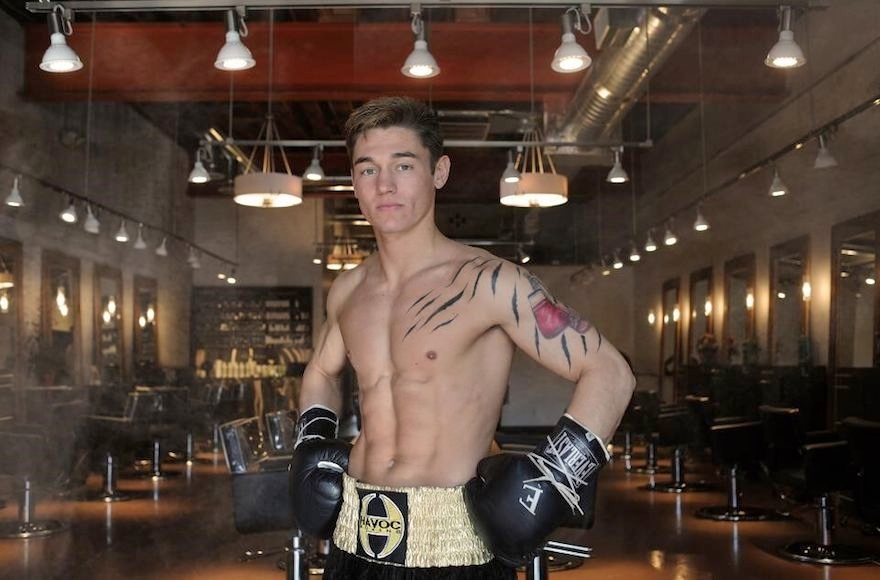 Boxer Dustin Fleischer hopes to be the first world champion who is the descendant of a Holocaust survivor. (Rich Kane/Roc Nation Sports)
Advertisement

(JTA) – When welterweight Dustin Fleischer enters the ring on Saturday evening, he’ll be wearing his late grandfather’s gold Star of David necklace with a red jewel — and carrying the weight of history on his shoulders.

The person who’ll be removing the jewelry for safekeeping will be his cornerman and trainer for the bout, his father, Phillip Fleischer, himself a former boxer and the son of a Holocaust survivor.

“My quest is to become the first world champion who’s the [descendant] of a Holocaust survivor,” said Dustin Fleischer, 26, a native of Monmouth Beach, New Jersey, just north of the fight’s site in Beach Haven.

When asked what his record is, Fleischer stated matter-of-factly: “It’s 3-0, with three knockouts. Soon it’ll be 4-0, with four knockouts.” Monthly fights through December are likely to bring his record by year’s end to 7-0, he added.

Of Ira Frank, a Native American who’s his opponent on Saturday, Fleischer said: “He’s not in my class. I know he’s not going to be able to handle what I bring to the table.”

Part of what Fleischer brings is that necklace, which was bequeathed by his paternal grandfather, Bernard “Buzio” Fleischer, a Holocaust survivor from Poland who died about 10 years ago. According to the younger Fleischer men, Buzio was shot three times and left to die, imprisoned in concentration camps, escaped from one and fought in a partisan unit.

After the war, Buzio settled in Florida and then New York, earning a living as a waiter, driving taxis and selling jewelry.

Clearly, some of that toughness was passed down to Dustin Fleischer. “I am his blood, he’s part of me, he gives me strength. I know the odds he conquered to survive in the Holocaust, and I know I can conquer the odds to become a world champion,” Fleischer said. 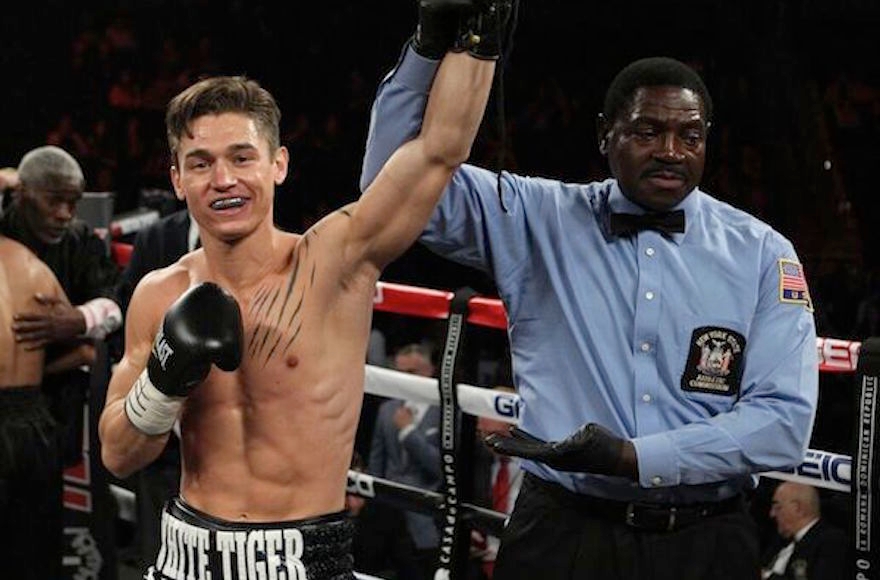 His career may be just beginning, but attention is growing.

Earlier this year, former heavyweight champion Mike Tyson posted an article on his Facebook page headlined “Dustin Fleischer – The Rising (Jewish) Star of Professional Boxing,” which by Friday had received more than 1,400 likes.

Jewish fans in North America, Israel and Great Britain regularly show their support by e-mail and on Fleischer’s Facebook page.

Grit doesn’t seem to have skipped a generation. Phillip Fleischer, 56, grew up in Queens, New York’s Kew Gardens Hills neighborhood, where he was one of a group of tattooed motorcyclists known as “the crazy Jews,” he said.

“We protected our neighborhood and we protected our religion, I can tell you that,” he said, adding that he was a member of the Jewish Defense League, an organization founded in New York in 1968 to protect Jewish people and combat anti-Semitism.

Fighting in the super-middleweight division, Fleischer said he went 4-2 as a pro under different names. He went on to earn a living as a sparring partner for other boxers. He drove a truck and eventually became a partner in a trucking company.

While Fleischer trained his son as an amateur (when he went 112-18), this is their first pairing in four professional fights. It developed because his regular trainer is getting a heavyweight boxer ready for a fight the same night.

READ: From the Archive: Punching out Hamas

“I don’t want to give myself a ‘k’ayin hora’ [an evil eye or a jinx], but he’s easy to work with. He’s a thinking fighter,” Fleischer said of his son. “Dustin’s style is so adaptive. He can be a brawler, he can be a slick boxer, he can move side to side. There’s so much athleticism to him because of his martial arts background.”

When Dustin Fleischer was 6 years old, he wrote on a photograph he gave to his karate teacher, John Gaddy: “Dear Sensei, I want to be a teacher like you or fight professionally.”

When Fleischer became a professional boxer, Gaddy showed him the autographed picture. “He completely forgot about it,” Gaddy said. “I told him, ‘These are the things that, when you set your mind to it, happen.’”

Fleischer first took to boxing at age 9 while watching his dad spar, and he has been a student of the sport ever since.

“I’m really addicted to the science of boxing and not getting hit, to the mental aspect,” Dustin Fleischer said. “When I’m shadow-boxing, I feel like I’m dancing, like I’m making music, especially when I’m sharp and I’m on.”

Defense is a key part of his boxing strategy. Floyd Mayweather, Jr., he said, “lay down a blueprint” for having “a long career without any long-lasting effects.” His other boxing role models are Timothy Bradley (“I admire his will to win”) and Terence Crawford (“When you talk about the strategy, Terence Crawford is the captain, man”).

Ironically, the Fleischers’ pugilism is also helping to advance the treatment of people with severe spinal-cord injuries.

A portion of the Brooklyn fight’s ticket sales benefited Team LeGrand, a fundraising arm for the Christopher and Dana Reeve Foundation.

The Fleischers, said Karen LeGrand, are “always trying to think of ways to help Team LeGrand.”
Regardless of the outcome of Saturday’s fight, Team Fleischer has shown itself to be pretty formidable, too.