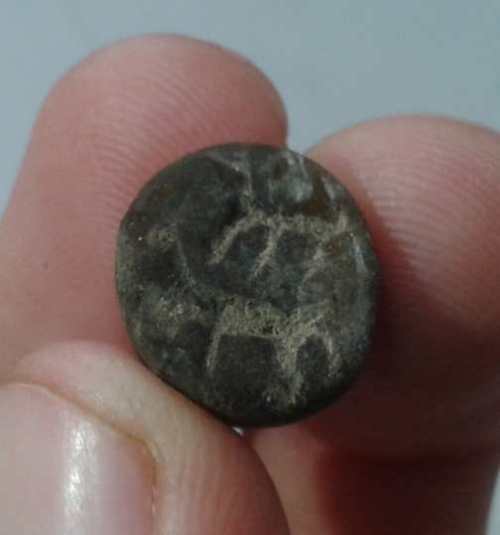 The seal, shortly after it was discovered. (Temple Mount Sifting Project)
Advertisement

(JTA) — A rare stone artifact dating to the 10th-century BCE was found in Jerusalem by a 10-year-old volunteer.

A Russian tourist volunteering for Jerusalem’s Temple Mount Sifting Project unearthed the small, animal-inscribed limestone item that is believed to have been used for sealing documents, the project said in a statement.

The young volunteer, Matvei Tcepliaev, unearthed the seal sometime in the past six months, but archaeologists only recently deciphered it.

The 11-year-old project, under the auspices of Bar-Ilan University, searches through thousands of tons of earth that was illegally removed by the Islamic Waqf from the Temple Mount in 1999 as it was building a mosque.

“The seal is the first of its kind to be found in Jerusalem,” Gabriel Barkay, a co-founder and a director of the project, said this week. “The dating of the seal corresponds to the historical period of the Jebusites and the conquest of Jerusalem by King David, as well as the construction of the Temple and the royal official compound by his son, King Solomon.

“What makes this discovery particularly significant is that it originated from upon the Temple Mount itself.”

More than 170,000 volunteers from Israel and around the world have participated in sifting through the salvaged earth.

“Since the Temple Mount has never been excavated, the ancient artifacts retrieved in the Sifting Project provide valuable and previously inaccessible information,” said Zachi Dvira, also a co-founder and director of the project. “The many categories of finds are among the largest and most varied ever found in Jerusalem. Even though they have been extracted from their archaeological context, most of these artifacts can be identified and dated by comparing them with those found at other sites.”

Dvira said that more than half a million items unearthed by volunteers “are still waiting to be processed and analyzed in our laboratory,” he said.