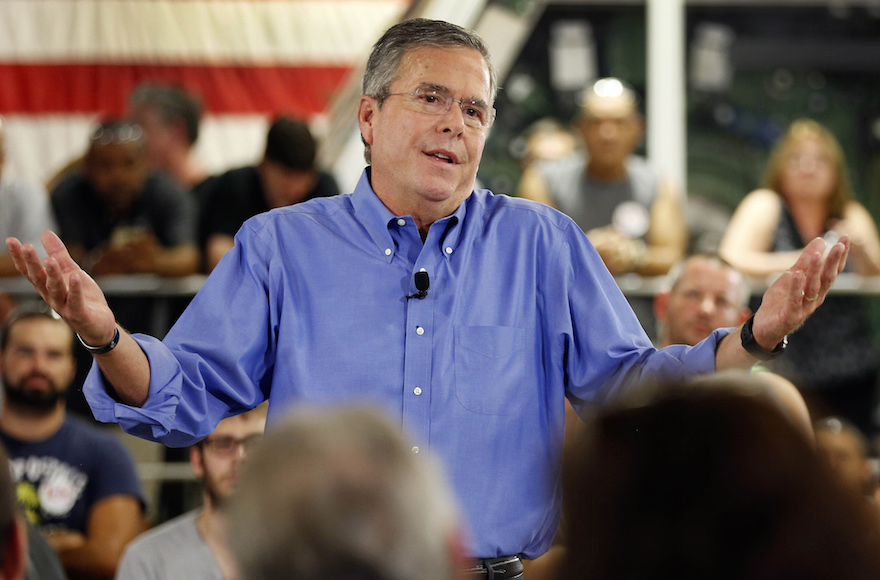 WASHINGTON (JTA) — Jeb Bush named a “Jewish leadership team” for his campaign that includes a number of Jews who were prominent in campaigning and working for his brother, the former President George W. Bush.

Bush said that among his supporters since his days as Florida governor are “members of the Jewish community who have welcomed me into their homes for Passover Seder, taken me as a travel companion to Israel and worked with me on issues of shared concern, such as religious freedom, school choice and economic opportunity,” according to a statement issued Friday by the campaign.

“Having their support has meant so much, and we are looking to build that team,” Bush said.

A number of the 75 listed supporters are Floridians, but a substantive portion is also associated with the presidency of his brother. They include Joshua Bolten, the former president’s chief of staff; Michael Mukasey, his attorney general; a number of liaisons to the Jewish community during the Bush presidency; and major George W. Bush fundraisers, including Mel Sembler and Fred Zeidman.

Also included is Eric Cantor, the former congressman who until last year was the majority leader in the U.S. House of Representatives.

Earlier this year, some conservatives raised concerns when Jeb Bush named as advisers officials in the administration of his father, President George H. W. Bush, who had clashed with Israeli governments in the late 1980s and early 1990s.

His statement on Friday said, “We will defend the institutions of faith and civic engagement, which are this nation’s glory. We will confront anti-Semitism wherever it exists. We will restore our alliances around the world, especially with the brave and democratic State of Israel.”