Why Israelis are fearing a third intifada 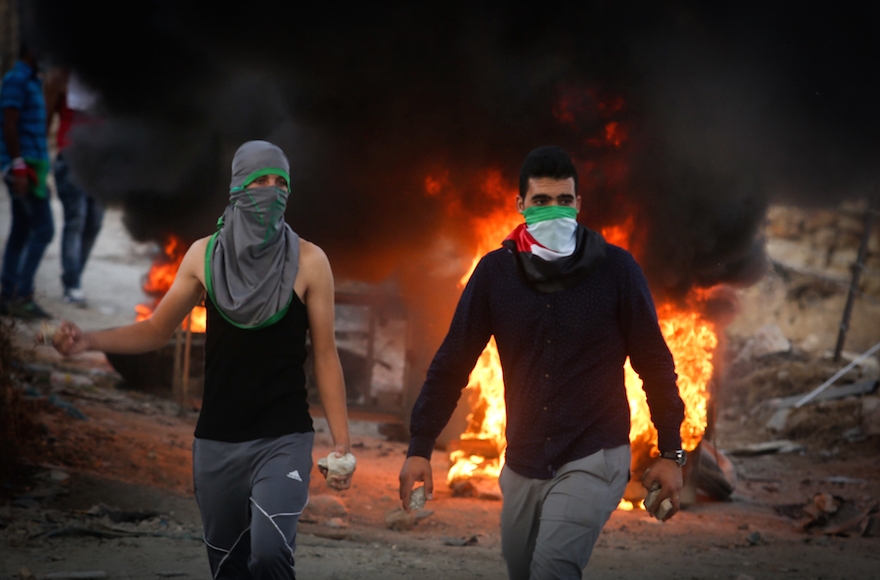 TEL AVIV (JTA) — First it was clashes on the Temple Mount. Then a mother and father were shot before the eyes of their four children. Then two men were killed in a stabbing attack in Jerusalem’s Old City.

Now Israelis fear the wave of conflict will only rise. Here’s why the violence began, how it’s escalated and what could come next.

Four Israelis have died in a string of terror attacks

The slow-burning Israeli-Palestinian conflict has flamed up in the past week with a series of terrorist attacks. On Thursday night, militants from the Al-Aqsa Martyrs’ Brigades — the armed wing of Palestinian Authority President Mahmoud Abbas’ Fatah party — shot and killed a young Jewish-Israeli husband and wife, Rabbi Eitam and Naama Henkin.

At the time, the Henkins, both in their early 30s, were driving through the northern West Bank to their home in the settlement of Neria. The couple’s four children, ages 4 months to 9 years, were in the car and witnessed the attack. They were lightly wounded and evacuated to a hospital.

Two days later, after Shabbat ended, a terrorist killed two rabbis in the Old City of Jerusalem. Aharon Bennett, a 22-year-old Israeli soldier, was on the way to the Western Wall when he, his wife and their two sons were attacked. He was off duty and out of uniform. His wife, Adele, 21, was seriously wounded and underwent emergency surgery.

The second victim, Nehemia Lavi, 41, was stabbed and killed when he tried to fend off the terrorist with a gun. Police shot and killed the terrorist, a 19-year-old law student.

And on Sunday, a Jewish teenager was wounded in a stabbing attack in Jerusalem’s Old City. He was rushed to the hospital, and his attacker was killed by police.

Tensions have been high over conflict at the Temple Mount.

The attacks follow weeks of tension over access to Jerusalem’s Temple Mount, the holy site known to Muslims as Haram al-Sharif, or the Noble Sanctuary. Israel barred a violent Islamic protest group from the Mount in early September, setting off demonstrations, stone throwing and arrests, and leaving one dead and dozens injured. Hours before Rosh Hashanah, Israeli police uncovered a stockpile of pipe bombs, firebombs and rocks that they feared would be aimed at Jewish worshippers.

In the unrest’s wake, Israel heightened police presence in Jerusalem’s Old City, and has sent police patrols to investigate neighborhoods in east Jerusalem. The government also passed a law that allows police to fire more quickly on Palestinian stone throwers, as well as increasing prison sentences and fines on the stone throwers.

Violence at the Temple Mount has since died down, but rhetoric around it remains tense. Arab Knesset member Jamal Zahalka was shown in a video shouting epithets at Jewish visitors to the mount on Tuesday. And in dueling speeches to the United Nations last week, Israeli Prime Minister Benjamin Netanyahu and Palestinian Authority President Mahmoud Abbas each accused the other side of upsetting the delicate balance at the site.

In response, Israeli leaders are talking tough and clamping down.

Israeli rhetoric has intensified following the attacks. Netanyahu has called for a hard line against the violence, responding to right-wing Jerusalem protesters who called for more forceful action against terrorism.

“We have directed the police and other security forces to deal aggressively with these phenomena,” Netanyahu said in a statement Tuesday. “We cannot accept a repetition of these events anywhere in the world, certainly not in Israel’s capital. We also demand very sharp action against incitement.”

Abbas has also directed his security forces to clamp down on terrorism. In an interview with Haaretz Wednesday, he rejected Netanyahu’s claim that he is inciting violence against Israelis. But he accused Israel of “aggression” on the Temple Mount.

“I support a popular, nonviolent struggle and oppose all violence and use of weapons,” he told Haaretz. “I’ve made clear a number of times that I don’t want to return to the cycle of violence. We do not seek violence and have not sought to escalate it, but the aggression against the Al-Aqsa Mosque and the worshippers in the mosque have led to this, and we are constantly trying to make sure it doesn’t intensify.”

The attacks even prompted harsh words from the normally conciliatory Israeli president, Reuven Rivlin. At a eulogy at Lavi’s funeral on Sunday, Rivlin said Israeli would find and punish terrorists.

“Our enemies know how to hurt us, but will not defeat us,” he said. “The fight against terrorism requires determination and inner fortitude. We will reach the killers of the innocent and pure, and we will reach their inciters and their dispatchers, and will deliver them a stinging blow.”

Israel took action, too. After the Saturday-night attack, the police barred most Palestinians from Jerusalem’s Old City for Sunday and Monday. Access was restricted to Israeli citizens, tourists, students, Old City residents and those doing business in the Old City. In addition, all Muslim men under age 50 were barred from the Temple Mount for Sunday and Monday.

But this has happened before — only to fade.

The past week’s events have dominated the news and gotten Israelis fearing the outbreak of broader Palestinian violence. On Saturday night, Israeli Knesset opposition leader Isaac Herzog wrote on Facebook that “we’re at the opening of a third intifada.” The first two violent Palestinian uprisings, in the late 1980s and early 2000s, left thousands of Israelis and Palestinians dead. A third wave would destroy the relative calm that Israelis have become accustomed to since the second intifada ended a decade ago.

But though violence has risen recently, it won’t necessarily worsen. Previous bouts have made Israelis concerned about an intifada, only to wane after a few weeks. Last year saw a string of terrorist attacks in Jerusalem that did not spark wider unrest. And a wave of riots across the West Bank, prompted by the death of a Palestinian detainee in Israeli custody, led to the same fears in 2013, but the protests fizzled.