Terror in Israel: A timeline of the escalating violence 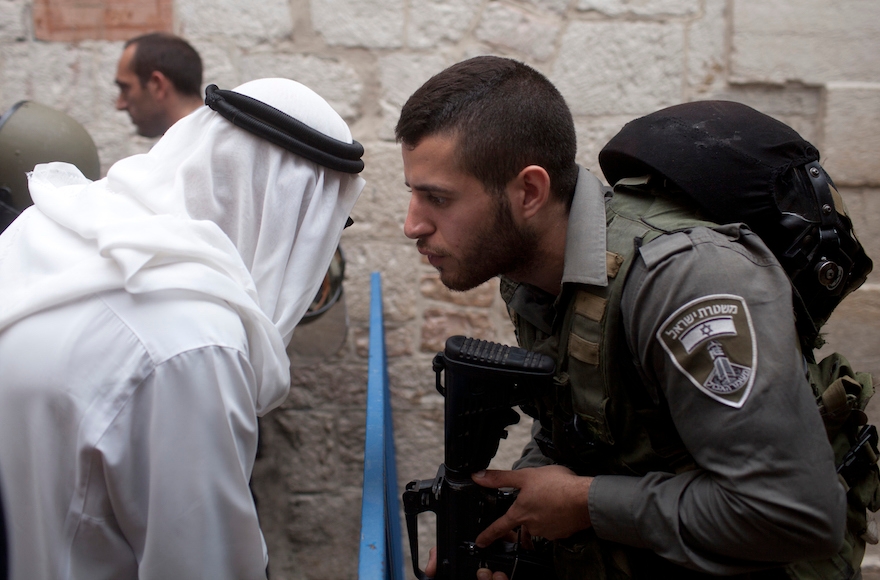 An Israeli border policeman speaking to a Palestinian man next to a stabbing scene in Jerusalem's Old City, October 7, 2015. (Lior Mizrahi/Getty Images)
Advertisement

TEL AVIV (JTA) — The past week has seen a wave of Palestinian attacks on Israelis and Israeli military operations, again prompting fears of a third intifada. Here’s a timeline of the lead-up to the unrest and the attacks themselves.

Sept. 9: Israeli Defense Minister Moshe Yaalon outlaws the Mourabitat, an Islamist protest group that Israel says is violent, from the Temple Mount. Muslims, who revere the site as the Noble Sanctuary, protest the decision.

Sept. 13: Israeli security forces raid the mount in the morning, ahead of Rosh Hashanah, and discover stockpiles of firebombs, pipe bombs and rocks that they fear will be used against Jewish worshippers.

Palestinian protesters throw rocks at Alexander Levlovich, a 64-year-old Jewish-Israeli, as he drives home from Rosh Hashanah dinner. Levlovich loses control of the car and crashes. He dies the next morning.

Sept. 14: Israeli police clash with Palestinian protesters on the Temple Mount. Two Israelis are injured. The U.S. State Department calls on all sides to “refrain from provocative actions and rhetoric.”

Sept. 15: On the third straight day of clashes on the mount, 26 Palestinians and five Israeli policemen are injured.

Sept. 18: In clashes in the West Bank and eastern Jerusalem, 21 Palestinians and three Israeli police officers are injured. Also, Israel bars Muslim men under 40 from the mount and increases police presence in the Old City of Jerusalem and on the Temple Mount. Clashes temporarily die down.

Sept. 19: Rockets from the Gaza Strip land in Israel, causing no injuries. Israel retaliates with airstrikes on Gaza.

Sept. 22: If clashes continue, Palestinian Authority President Mahmoud Abbas says in a speech, it could lead to an “intifada we don’t want.”

Sept. 28: Riots start anew on the Temple Mount, then die down, as Israeli security forces again uncover stockpiles of weapons.

Sept. 30: Speaking to the U.N. General Assembly, Abbas accuses Israel of using “brutal force to impose its plans to undermine the Islamic and Christian sanctities in Jerusalem.” He also says Israel has broken Israeli-Palestinian agreements and says the Palestinian Authority will not be bound by them.

Oct. 1: Israeli Prime Minister Netanyahu addresses the United Nations. In addition to a lengthy rebuke of the world’s embrace of Iran, Netanyahu reiterates his assertion that Israel seeks to maintain the status quo on the mount. He also repeats his call to restart negotiations with the Palestinians without preconditions.

At night, as they drive home through the West Bank, a Jewish-Israeli couple, Rabbi Eitam and Naama Henkin, are ambushed by terrorists and shot dead in front of their four children.

Oct. 3: A terrorist kills two rabbis in the Old City of Jerusalem. Aharon Bennett, a 22-year-old Israeli soldier, is on the way to the Western Wall when he, his wife and their two sons are attacked. He is off duty and out of uniform. His wife, Adele, 21, is seriously wounded and undergoes emergency surgery.

The second victim, Nehemia Lavi, 41, is stabbed and killed when he tries to fend off the attacker with a gun. The assailant is shot and killed by police.

Oct. 4: Moshe Malka, 15, is stabbed near the Old City. The alleged assailant, Fadi Aloon, is shot and killed by police as he flees the scene. But the Palestinians claim that Aloon is innocent and was shot by police at the urging of an extremist Jewish mob.

Netanyahu says: “We are allowing our forces to take strong action against those who throw rocks and firebombs. This is necessary in order to safeguard the security of Israeli citizens on the roads and everywhere. We are not prepared to give immunity to any rioter, inciter or terrorist anywhere; therefore, there are no restrictions on the action of our security forces.”

In military raids in the West Bank, Israel kills two Palestinians, including a 13-year-old, within 24 hours. Israel says the 13-year-old was shot in error.

After the Kiryat Gat stabbing, the Palestinian assailant escaped into a residential building, where he was killed in a shootout with police.

Oct. 8: Three more stabbing attacks take place: a man in Jerusalem, a woman in Hebron and five people in central Tel Aviv. The Tel Aviv attack, which lightly injured the victims, is with a screwdriver.

Netanyahu bars all Knesset members from the Temple Mount, hoping to curb escalations.