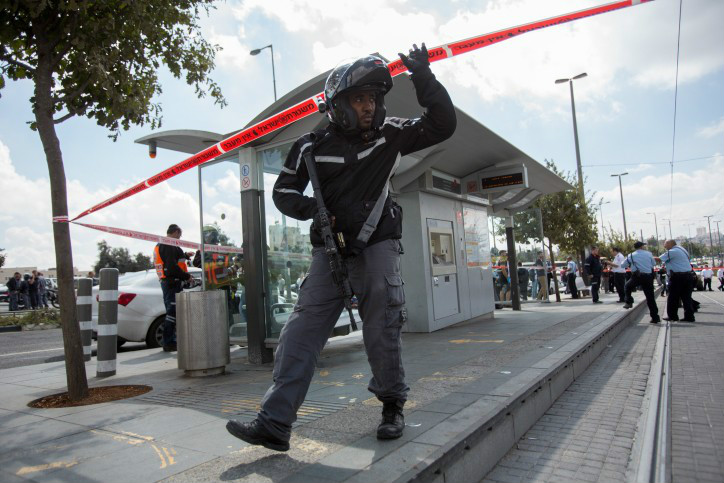 Police at the scene of a stabbing attack at the Jerusalem Light Rail on Oct. 8, 2015, where a Palestinian stabbed and wounded two Israeli Jews, the 4th stabbing incident in the past week in Jerusalem. (Photo/Yonatan Sindel/Flash90)
Advertisement

JERUSALEM (JTA) — A yeshiva student was in serious condition after a Palestinian man stabbed him in the neck in an apparent terror attack in Jerusalem.

The suspected attacker, 19, of eastern Jerusalem, was subdued and arrested by police, and is being questioned, the Israel Police said in a statement.

The attack took place on Wednesday afternoon at a light rail stop in French Hill, opposite the National Police Headquarters, near the border between western and eastern Jerusalem.

The victim, an Israeli citizen, was taken to Shaare Tzedek Hospital in Jerusalem with the knife still lodged in his neck. Another man was slightly injured while attempting to disarm the assailant.

After the attack, the assailant attempted to grab the gun from a security guard at the light rail, but failed and fled on foot. He was pursued and captured by police.

It was the fourth stabbing attack and the sixth terror attack on an Israeli target in 24 hours.