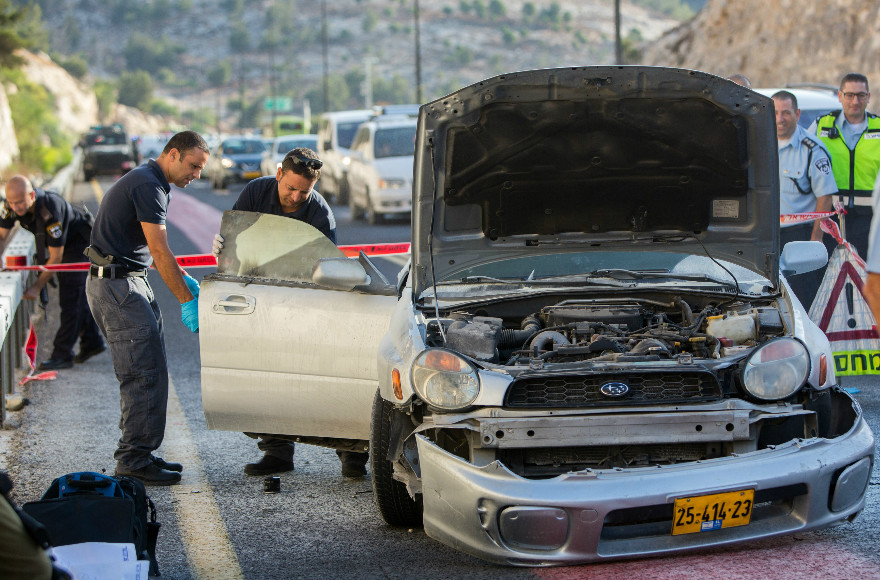 Police and forensic team at the scene of an attempted suicide bombing near Ma'ale Adumim, just east of Jerusalem, on Oct.11, 2015. (Yonatan Sindel/Flash90)
Advertisement

JERUSALEM (JTA) — A Palestinian woman detonated explosives in her car at a West Bank checkpoint near Jerusalem.

An Israeli policeman was injured in the attack by a 31-year-old from Jericho at a checkpoint near the city of Maale Adumim on Sunday morning. The bomber was seriously injured and taken to a Jerusalem hospital.

She reportedly shouted “God is great” in Arabic before detonating the explosives, and tried to jump out of the car right before the explosion, according to police. The car carried a canister of gas, police said, which may indicate that she had intended to carry out a larger attack.

The woman, whose car had Israeli license plates, was pulled over for driving a “suspicious vehicle” in a carpool lane, according to police.

The Palestinian Maan news agency reported that the car had an “electrical problem” that ignited a small fire in the car.

The attack followed several violent episodes on Saturday, including two stabbing attacks in Jerusalem that injured at least three Israeli civilians and a police officer; several rock-throwing attacks that injured Israeli civilians and soldiers; the killing of at least seven Palestinian rioters trying to infiltrate Israel at the Gaza security fence; and retaliatory airstrikes by Israel against Hamas that killed a pregnant Palestinian and her 2-year-old daughter.