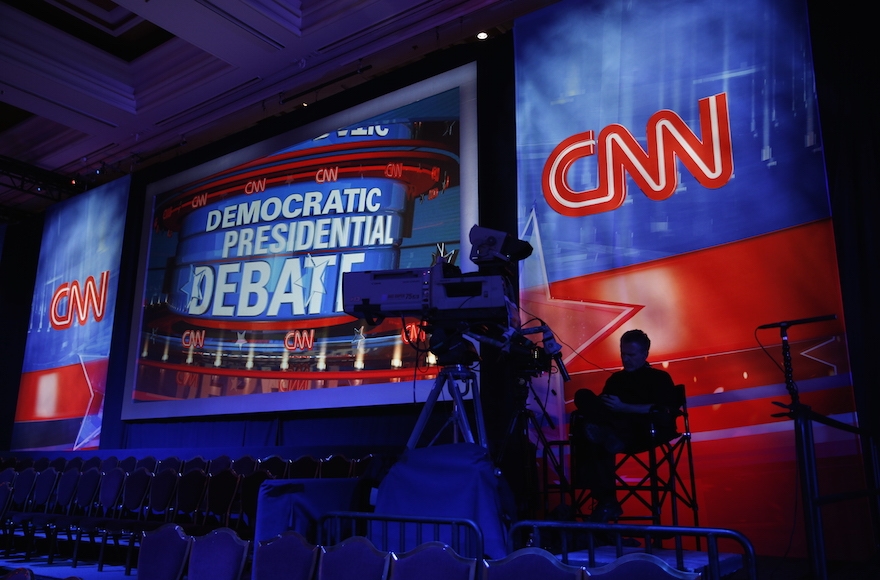 Let’s be honest: It’s not going to be as fun as the Republican debates. No kiddie table, no crowd shots — no Donald Trump.

But there may well be sparks, even Jewish sparks, at the Democratic presidential debate on Tuesday night in Las Vegas.

With talk of a third intifada, the Israeli-Palestinian conflict is in the news. The Obama administration has issued statements calling on all sides to refrain from violence, while Hillary Rodham Clinton has squarely blamed the Palestinians. She can be expected to continue her “no daylight” policy in the debate.

What will the other candidates say if asked?

Bernie Sanders has decried violence against Israelis even in pro-Palestinian setting, but is consistently even-handed. The socialist senator from Vermont will likely make a point of condemning violence on both sides in Las Vegas.

The other candidates have said less on the issue, and so are less predictable.

Martin O’Malley forged a close relationship with Maryland’s Jewish community when he was Baltimore’s mayor and then governor — he visited Israel three times in those capacities. He will probably stand with Israel.

Lincoln Chafee, formerly Rhode Island’s governor, was the target of pro-Israel money as a Republican senator — and not in a good way — for being cool on Israel. He raised hackles when he obstructed John Bolton’s nomination to be United Nations ambassador, in part a statement against Israeli settlement expansion. (Bolton was beloved by the pro-Israel community.) Chafee lost that election, but blames anti-GOP Iraq war sentiment for the loss.

Jim Webb, the one-term Democratic senator from Virginia, has been a blank slate on Israel.

The other big national Jewish issue of the moment is of course: Ben Carson. The brain surgeon and GOP candidate has said that access to guns might have kept Jews safe from Nazis, outraging many.

If it comes up, expect outrage from Clinton, who has said that a formative experience was learning about the Holocaust as a child.

Sanders, whose father lost much of his family in the Holocaust, may chime in as well, although he is seen as among the most pro-gun rights Democrats, a product of his gun-loving state.

The others candidates responses are anyone’s guess.

All the Democrats who will be on stage back the Iran nuclear deal, although Clinton has been most hawkish about keeping Iran to it. Should the deal come up — and it may, because of Iran’s missile test this week — it will be interesting to see if the debate devolves into a rehash of the Iraq War, which was opposed in real time by Webb, Chafee and Sanders, and backed by Clinton.

Other potential Jewish sparks: Does Clinton mention her Jewish son-in-law? Does the famously reticent Sanders expand on his childhood? Does O’Malley give a shout-out to the Pikesville homies?